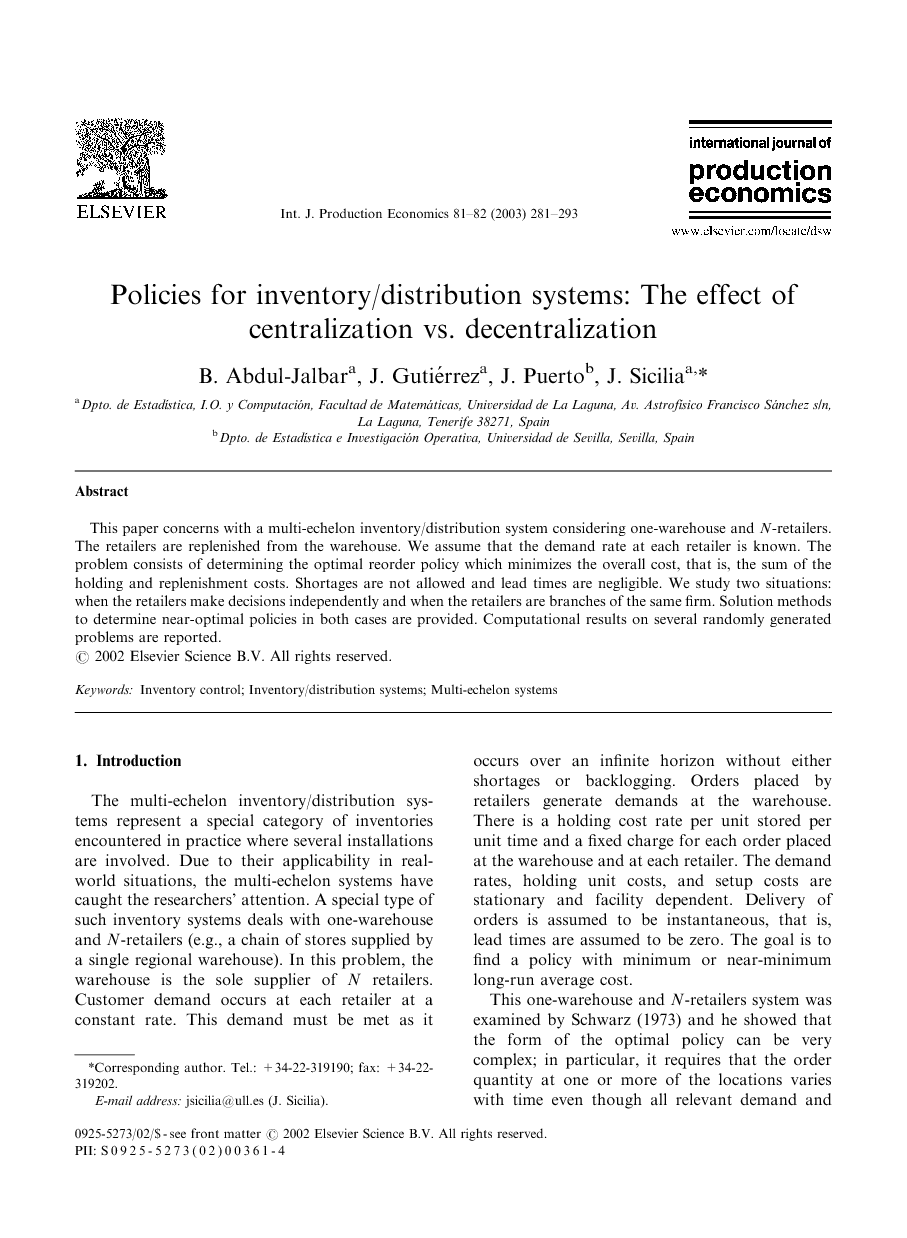 This paper concerns with a multi-echelon inventory/distribution system considering one-warehouse and N-retailers. The retailers are replenished from the warehouse. We assume that the demand rate at each retailer is known. The problem consists of determining the optimal reorder policy which minimizes the overall cost, that is, the sum of the holding and replenishment costs. Shortages are not allowed and lead times are negligible. We study two situations: when the retailers make decisions independently and when the retailers are branches of the same firm. Solution methods to determine near-optimal policies in both cases are provided. Computational results on several randomly generated problems are reported.

The multi-echelon inventory/distribution systems represent a special category of inventories encountered in practice where several installations are involved. Due to their applicability in real-world situations, the multi-echelon systems have caught the researchers’ attention. A special type of such inventory systems deals with one-warehouse and N-retailers (e.g., a chain of stores supplied by a single regional warehouse). In this problem, the warehouse is the sole supplier of N retailers. Customer demand occurs at each retailer at a constant rate. This demand must be met as it occurs over an infinite horizon without either shortages or backlogging. Orders placed by retailers generate demands at the warehouse. There is a holding cost rate per unit stored per unit time and a fixed charge for each order placed at the warehouse and at each retailer. The demand rates, holding unit costs, and setup costs are stationary and facility dependent. Delivery of orders is assumed to be instantaneous, that is, lead times are assumed to be zero. The goal is to find a policy with minimum or near-minimum long-run average cost. This one-warehouse and N-retailers system was examined by Schwarz (1973) and he showed that the form of the optimal policy can be very complex; in particular, it requires that the order quantity at one or more of the locations varies with time even though all relevant demand and cost factors are time invariant. Thus, he considered the possibility of restricting the class of strategies, where the order quantity at each location does not change with time and he determined the necessary conditions of an optimal policy. Moreover, he provided a solution method for the one-warehouse and N identical retailers problem and suggested heuristic solutions for the general case. Schwarz (1973) proved that an optimal policy can be found in the set of “basic” policies. A basic policy is any feasible policy where deliveries are made to the warehouse only when the warehouse has zero inventory and, at least one retailer has zero inventory. Moreover, deliveries are made to any given retailer only when that retailer has zero inventory. In addition, all deliveries made to any given retailer between successive deliveries to the warehouse are of equal size. In particular, Schwarz (1973) introduced two classes of basic policies: myopic and single cycle policies and he also tested the near optimality of these policies using three lower bounds. A myopic policy is one which optimizes a given objective function with respect to any two stages and it ignores multi-stage interaction effects. Accordingly, the one-warehouse and N-retailers system is viewed as N one-warehouse and one-retailer systems. A single cycle policy is one that is stationary and nested. A policy is said to be stationary if each facility always orders the same quantity at equally spaced points in time. A nested policy is one in which each time any stage orders, all of its successors also order. Graves and Schwarz (1977) performed a similar analysis for arborescent systems in which each stage obtains its supply from an unique immediate predecessor and supplies its output to a set of immediate successors. They reduced the class of admissible policies for stationary continuous-time infinite-horizon multi-stage production/inventory problems to find a good approximation to optimal policies, presenting a branch-and-bound algorithm to determine optimal single cycle policies for arborescent systems. They also examined the near-optimality of the myopic policies. Roundy (1985) showed that nested policies can have very low effectiveness in the worst case and he defined new classes of policies for the one-warehouse N-retailers problem: q-optimal integer-ratio and optimal power-of-two policies. He proved that for any data set, the effectiveness of q-optimal integer-ratio and optimal power-of-two policies is at least 94% and 98%, respectively. In this paper, we introduce near-optimal policies for inventory/distribution systems with one-warehouse and N-retailers considering an instantaneous demand pattern at the warehouse. We study two cases: if the warehouse and the retailers belong to the same firm (centralization), or if the warehouse and retailers belong to different firms (decentralization). Outside customer demand rates are assumed known and constant. Shortages and lead times are not allowed. At each stage, a fixed-order cost which is independent of the lot size and a holding unit cost are considered. The goal consists of determining the near-optimal policy with minimum overall cost both when there exists dependence and when not. We introduce a solution method to obtain the near-optimal plan in the case of independence or decentralization. This method allows us to know in advance the number of periods of the demand vector at the warehouse. Once this number is calculated, either the Wagner and Whitin (1958) algorithm or the Wagelmans et al. (1992) procedure for inventory systems with time-varying demand can be applied. On the other hand, when the N retailers are branches of the same firm (centralization), we deal with the class of single cycle policies and we propose a branch and bound algorithm to determine the near-optimal plan. The outline of the remaining of this paper is divided into seven sections. In Section 2, we introduce the notation and terminology required to state the problem. Section 3 is devoted to the one-warehouse and N-retailers problem assuming that the retailers are independent of the warehouse. In such a situation, the problem becomes a time-varying demand inventory system and a procedure to determine the number of periods at the warehouse is provided. Section 4 deals with the centralized situation, that is, when the retailers and the warehouse belong to the same firm. In this case, two different policies are suggested: the retailers can place their orders at a common replenishment time or at different replenishment times. In the former case, the solution can be obtained directly using an analytical approach. In the latter case, a solution method based on a branch and bound scheme is proposed. Section 5 presents a numerical example which is analyzed assuming that there is both centralization and decentralization among the warehouse and the retailers. Computational results are reported in Section 6. Finally, in Section 7, we present our conclusions and final remarks.

In this paper, we have studied the one warehouse and N-retailers problem, where stocking decisions have to be adopted to achieve an optimal plan. We have focused our attention on the decentralized and the centralized cases. We have implemented an algorithm to obtain near-optimal ordering plans at the warehouse when the decentralization is addressed. Also, when the centralized case is assumed, we have devised two procedures considering a common replenishment time and different reorder times, respectively. When the parameters are generated using the same uniform distribution, the results show that as the number of retailers increases so does the number of instances where the decentralized policy is better. In addition, given a number of retailers, we have carried out an analysis of sensitivity of the parameters. This analysis suggests that, under specific conditions of the unit replenishment and holding costs at the warehouse, the centralized policy can provide better solutions. Our future research will be focused on the one-warehouse and N-retailers system assuming shortages at the warehouse or at the retailers. Another relevant aspect consists of determining inventory policies for more general structures where several warehouses can deliver goods to different retailers.