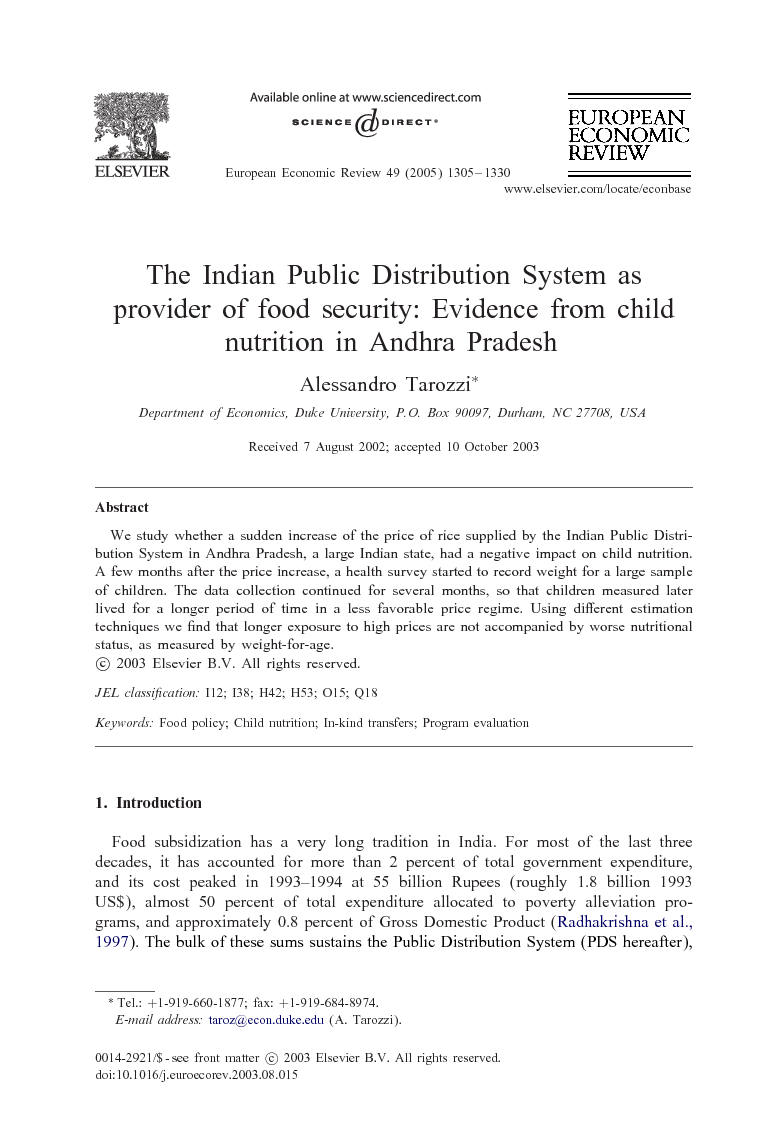 We study whether a sudden increase of the price of rice supplied by the Indian Public Distribution System in Andhra Pradesh, a large Indian state, had a negative impact on child nutrition. A few months after the price increase, a health survey started to record weight for a large sample of children. The data collection continued for several months, so that children measured later lived for a longer period of time in a less favorable price regime. Using different estimation techniques we find that longer exposure to high prices are not accompanied by worse nutritional status, as measured by weight-for-age.

In this paper, we investigate whether a large and sudden reduction of the implicit subsidy offered by the Public Distribution System in Andhra Pradesh had negative effects on children's weight-for-age. Our identification strategy uses the fact that the NFHS recorded children's weight during a 4-month period, form April to July 1992, while the increase in PDS rice happened at the end of January in the same year. Given their age, children measured later in the survey have been exposed to a longer period of high prices. Using a range of different estimators, we find that a subsidy reduction estimated to be equivalent to about 5 percent of the poorest households’ total budget, did not affect child nutrition, as measured by weight-for-age. We find a negative impact only on girl weight, and even in this case the effect is small and not statistically significant. This suggests the important possibility that relatively large changes in food subsidies can have little or no effect on child nutrition. We can think of different—possibly concurring—explanations for this negative finding. First, even if the changes in the rice scheme reduced considerably the subsidy, the size of the subsidy itself might have been too small for its drop to be detected by our estimates, given the relatively small size of our sample. In Section 5 we showed that, even among the poorest households, a return to the more generous former rice scheme might have been associated with a relative increase in calorie availability per child as small as 2–4 percent, possibly lower, if one accepts the smallest calorie–income elasticity estimated in the literature.35 In other words, even if weight responds quickly to changes in nutrition, it is possible that nutrients consumption itself did not change significantly as a consequence of the changes introduced in the PDS regime. However, the lower elasticities are not widely accepted in the field (e.g. Deaton, 1997, Chapter 4), and other studies (e.g. Rand et al., 1985) suggest that even small discrepancies between calorie intake and physical activity can lead to significant changes in weight over a short period of time. Moreover, anthropometric measurements are the results both of nutrient intakes and of the epidemiological environment in which the child lives, so one might expect weight-for-age to respond to a drop in income even through channels different from nutrition. For example, the household might have to reduce health-related expenditure, or have to resort to less safe sources of drinking water. So, our results suggest a low income elasticity of nutritional status, as measured by weight-for-age, and do more than merely corroborate the low income elasticity of calorie intake sometimes suggested in the literature. Second, because the changes took place only 3 months before the starting of the NFHS, we cannot exclude that even the poorest households have been able to cope with the reduction in subsidy, making use of accumulated savings, or reducing the budget share devoted to non-food items. Third, it is possible that child nutrition was buffered at the expense of adult consumption of food. In particular, given the very young age of the children in our sample, it is possible that breast-feeding protected them, at the expense of the mother's nutritional status. This hypothesis cannot be tested directly using our data, since anthropometric measurements were not taken for the mothers. However, our conclusions do not change significantly if one performs a separate analysis for children aged up to 24 months, and for older children, for which breast-feeding is much less likely to play an important role. Fourth, one might be worried about attenuation bias due to error in measuring exposure to the high price regime. In fact, our methodology does not distinguish between, for example, the exposure of a child born at the end of December 1991, and measured at the end of June of the following year, and that of another for which birth and measurement took place at the beginning of the same 2 months. Both children can have the same age—in months—and both have been measured in June, but there is approximately a 1-month difference in actual exposure to the high-price regime, which started at the end of January 1992. Therefore, as a robustness check, we have repeated the estimations calculating the period of exposure to the high-price regime in days (by making use of the day of measurement reported in the survey), but this does not change any conclusion.36 With all these caveats, our results cast further doubts on the ability of the Public Distribution System to offer food security to poor households, which is its primary proclaimed objective. Even in a state like Andhra Pradesh, where the system is working relatively well, we do not find evidence that this task is being achieved.