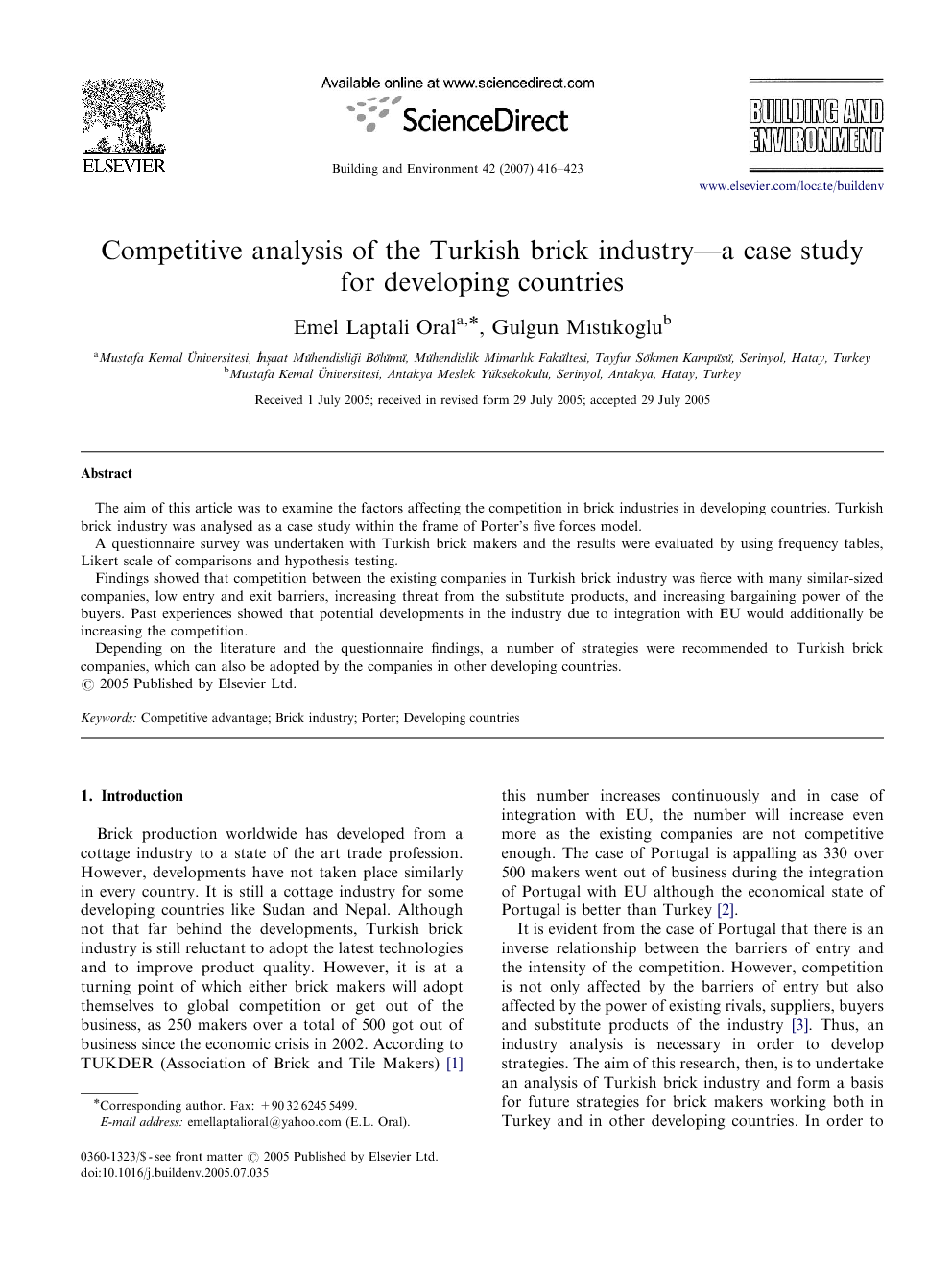 The aim of this article was to examine the factors affecting the competition in brick industries in developing countries. Turkish brick industry was analysed as a case study within the frame of Porter's five forces model. A questionnaire survey was undertaken with Turkish brick makers and the results were evaluated by using frequency tables, Likert scale of comparisons and hypothesis testing. Findings showed that competition between the existing companies in Turkish brick industry was fierce with many similar-sized companies, low entry and exit barriers, increasing threat from the substitute products, and increasing bargaining power of the buyers. Past experiences showed that potential developments in the industry due to integration with EU would additionally be increasing the competition. Depending on the literature and the questionnaire findings, a number of strategies were recommended to Turkish brick companies, which can also be adopted by the companies in other developing countries.

Brick production worldwide has developed from a cottage industry to a state of the art trade profession. However, developments have not taken place similarly in every country. It is still a cottage industry for some developing countries like Sudan and Nepal. Although not that far behind the developments, Turkish brick industry is still reluctant to adopt the latest technologies and to improve product quality. However, it is at a turning point of which either brick makers will adopt themselves to global competition or get out of the business, as 250 makers over a total of 500 got out of business since the economic crisis in 2002. According to TUKDER (Association of Brick and Tile Makers) [1] this number increases continuously and in case of integration with EU, the number will increase even more as the existing companies are not competitive enough. The case of Portugal is appalling as 330 over 500 makers went out of business during the integration of Portugal with EU although the economical state of Portugal is better than Turkey [2]. It is evident from the case of Portugal that there is an inverse relationship between the barriers of entry and the intensity of the competition. However, competition is not only affected by the barriers of entry but also affected by the power of existing rivals, suppliers, buyers and substitute products of the industry [3]. Thus, an industry analysis is necessary in order to develop strategies. The aim of this research, then, is to undertake an analysis of Turkish brick industry and form a basis for future strategies for brick makers working both in Turkey and in other developing countries. In order to achieve this, Porter's five forces model [3] is utilised as a framework.

The aim of this article was to examine the factors affecting the competition in brick industries in developing countries. Turkish brick industry was analysed as a case study within the frame of Porter's five forces model. Turkish brick industry is dominated by small to medium-sized companies carrying out labour-intensive production. Rivalry among competitive companies is fierce as there are quite a few number of equally balanced companies with low differentiation, low switching costs, both slow growth (even shrinkage) and slow development of the industry. Although, its effect on competition was not stressed in Porter's five forces model, globalisation is expected to increase the competition in Turkish brick industry through introduction of EU norms to product standards and decreasing barriers of entry to international companies in case of integration of Turkey with EU. Yet, barriers to entry and exit to national brick makers are low, as there are no government regulations against entry to or exit from the industry. However, bureaucratic procedures for site establishments, difficulties related with the access to distribution channels, cost disadvantages of new entrants due to both the learning curve and the economies of scale, and the dominance of long-term relationships between the existing companies and the customers present difficulties for the new entrants. Threat of substitute products has not been experienced throughout the industry widely yet. However, increasing market share of the substitute products shows that the threat of the substitute products should not be ignored and product developments should be one of the main strategies of the brick makers in order to stay competitive. Additionally, marketing strategies should focus on the promotion of the advantages of brick products against the substitutes in order to satisfy the buyers’ concerns related with the product specifications in terms of weight, durability, cost and insulation. Bargaining power of buyers has been increasing due to the decline in construction demand after the economic crisis in 2002. The question of bargaining power of suppliers, yet, is not relevant for Turkish brick makers, as most of the brick makers are their own suppliers of clay. However, the changing technological requirements suggest that suppliers of the new technologies will have a strong bargaining power in the near future. While current production technologies used by the Turkish brick makers were good enough to satisfy both the domestic customers and the current product standards, introduction of EU standards into the industry will require better product quality. Brick makers will have to adopt their technologies. Thus, modernising existing plants with a strong technical support should be the companies’ priority in their investment strategies. However, literature showed that the cost/benefit relationship of the modern production technologies were indirectly proportional with the amount of production. Thus, the option of partnerships should also be considered in order to attain maximum benefits by increasing the amount of production. Companies can, then, introduce a cost leadership strategy by using their advantages of cheap labour and natural resources of clay against the developed countries. This advantage can also be used in order to provide outsourcing to large scaled companies outside Turkey. As a general conclusion, it can be stated that the advantages of cheap labour together with the lack of customer demand of quality and lack of proper product standards have resulted in slow progress (in terms of quality and productivity) in brick industries both in Turkey and in most of the developing countries. Cost differentiation has been the main competitive advantage for the brick makers. However, in order to survive against the global competition, low cost with high quality should be targeted by the brick makers .Yet, the size, the location and the technical know-how are important parameters that would affect the brick makers’ priorities in choosing their strategies.