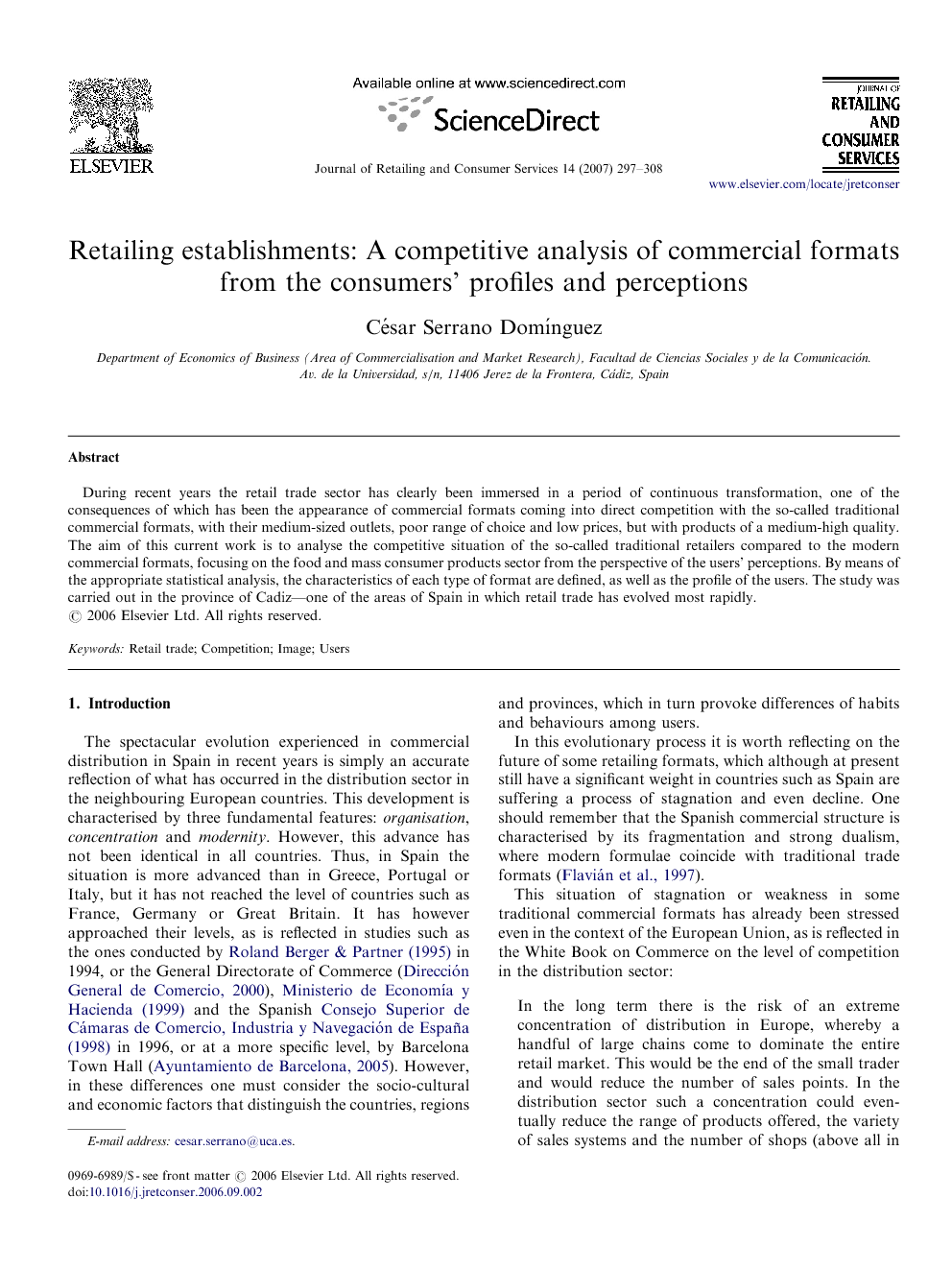 During recent years the retail trade sector has clearly been immersed in a period of continuous transformation, one of the consequences of which has been the appearance of commercial formats coming into direct competition with the so-called traditional commercial formats, with their medium-sized outlets, poor range of choice and low prices, but with products of a medium-high quality. The aim of this current work is to analyse the competitive situation of the so-called traditional retailers compared to the modern commercial formats, focusing on the food and mass consumer products sector from the perspective of the users’ perceptions. By means of the appropriate statistical analysis, the characteristics of each type of format are defined, as well as the profile of the users. The study was carried out in the province of Cadiz—one of the areas of Spain in which retail trade has evolved most rapidly.

The spectacular evolution experienced in commercial distribution in Spain in recent years is simply an accurate reflection of what has occurred in the distribution sector in the neighbouring European countries. This development is characterised by three fundamental features: organisation, concentration and modernity. However, this advance has not been identical in all countries. Thus, in Spain the situation is more advanced than in Greece, Portugal or Italy, but it has not reached the level of countries such as France, Germany or Great Britain. It has however approached their levels, as is reflected in studies such as the ones conducted by Roland Berger & Partner (1995) in 1994, or the General Directorate of Commerce ( Dirección General de Comercio, 2000), Ministerio de Economía y Hacienda (1999) and the Spanish Consejo Superior de Cámaras de Comercio, Industria y Navegación de España (1998) in 1996, or at a more specific level, by Barcelona Town Hall ( Ayuntamiento de Barcelona, 2005). However, in these differences one must consider the socio-cultural and economic factors that distinguish the countries, regions and provinces, which in turn provoke differences of habits and behaviours among users. In this evolutionary process it is worth reflecting on the future of some retailing formats, which although at present still have a significant weight in countries such as Spain are suffering a process of stagnation and even decline. One should remember that the Spanish commercial structure is characterised by its fragmentation and strong dualism, where modern formulae coincide with traditional trade formats (Flavián et al., 1997). This situation of stagnation or weakness in some traditional commercial formats has already been stressed even in the context of the European Union, as is reflected in the White Book on Commerce on the level of competition in the distribution sector: In the long term there is the risk of an extreme concentration of distribution in Europe, whereby a handful of large chains come to dominate the entire retail market. This would be the end of the small trader and would reduce the number of sales points. In the distribution sector such a concentration could eventually reduce the range of products offered, the variety of sales systems and the number of shops (above all in urban centres and rural areas) and would change the relationship between small producers and retailers (Comisión de las Comunidades Europeas, 1999). In Spain the changes that have occurred in consumers’ behaviour and buying habits have significantly influenced the development of commercial distribution. In the studies on buying habits reviewed, such as the one by the Secretary of State of Tourism and Commerce (Secretaría de Estado de Turismo y Comercio, 2004) or the National Institute for Consumer Affairs (Rebollo, 2000), we find that consumers in the 1990s and at the start of the new century are more informed, educated and concerned about the environment. They take into account the quality, the service and other variables apart from the price in their purchasing decisions. They have less time available for shopping and have changed their habits regarding the type of store they frequent. One should consider however that changes in buying habits and in the structure of retail trade are the result of cause–effect relations that run in both directions—i.e., certain changes in the buying habits are a consequence of modifications in the commercial supply, but these modifications are in turn attempting to fit social, cultural and economic changes in the demand (Frías et al., 1998), effects also deriving from aspects to do with public trade policies, which differ among the EU countries, according to various studies (Coca-Stefaniak et al., 2005). Faced by the situation described above, maintaining the competitiveness of a business requires a complete and total adaptation, as much to the demand as to the new supply structure, which requires a modification of the firm's strategic approach. The starting point for this is survival (Sainz de Vicuña, 1996), but through a series of factors in which the small business can compete successfully: professionalisation, association, specialisation, differentiation and building customer loyalty. For the small retailer, the difficulty is not so much what to change but how to change and for this it needs to understand how the users perceive the current retail formats and then subsequently identify its own strengths and weaknesses, as the way to adapt to the current context, taking the decisions of strategic and tactical change. The above descriptive analysis provides the justification for this research, which aims to examine traditional stores’ problems of competitiveness compared to the new commercial formats. The results support strategies for change for the traditional formats to raise their competitiveness.

Considering the retail outlet as a product in itself, with its defining characteristics and attributes and the fact that the consumer not only chooses products to purchase but also the establishment in which to do it, poses a challenge to traders—to understand consumers’ perceptions of the different store options and the criteria that they take into account when choosing where to shop. This approach involving the image of commercial formats has been used since the first contributions of Martineau (1958). Subsequently, it was taken up by authors such as Urban and Hauser (1980) and, in Spain, by Muñoz (1993), Vázquez (1989) and Sainz de Vicuña (1999). In essence, when traders understand their current and potential customers’ perceived image of them this leads them to consider a differentiation strategy, to seek a positioning in the minds of the consumers with respect to their competitors and to try to achieve the desired image. This perceived image is formed on the basis of the identification and valuation of defining attributes of stores in which the mutual interaction of these takes on great importance. Understanding why consumers buy in one store and not another tends to be the main objective of researchers and of the approach of differentiation strategies in retail distribution. Understanding the consumer requires the determination of the fit between supply and demand that leads to the situation and trends of the current retail distribution sector (González et al., 1999). Thus, determining the behaviours with respect to the choice of outlet for food products, as well as the criteria used, the perception of the different types of outlet and the user profiles, are the core themes of this work. With regards the objectives and hypotheses of this research, we first identified the main outlet choice criteria, which allowed us to partially confirm Hypothesis H1.1, since although the product quality, in component 1, of greater variance explained, is among the most valued attributes when choosing an outlet, the remaining attributes associated with traditional commerce (proximity, customer service, habit or trust) are associated with components with low levels of importance. With regards Hypothesis H2 and its two sub-hypotheses, the cluster analysis and subsequent analysis of variance revealed three different groups of consumer. In this respect, sub-hypotheses H2.1 and H2.2 have been only partially confirmed, since although Group 3, which has the oldest consumers, associates some outlet choice preferences according to criteria linked to traditional commerce, in others such as proximity this association is not clear. Group 1, whose consumers are demanding with respect to the product and the outlet, is also associated with the criteria most linked to traditional commerce, while Group 2, whose consumers are the youngest, has the strongest link with outlet choice criteria associated with modern commerce. The different competitive positionings and commercial formulae that characterise the competitive situation in retailing can be interpreted as the result of a “natural selection” working on the efficiency and profitability of the competing firms. In this competitive interaction, the consumers play a fundamental role. Although the dimensions of the retailers’ actions are conditioned by various legislative, economic, technological and other aspects, it is the market in its most traditional sense that is the main determinant of their commercial strategies. The nature and needs of consumers’ purchases, conditioned in turn by their economic, political, social or cultural circumstances, drives the commercial structure as far as positioning is concerned, with the definition and satisfaction of the market of reference the process guiding the commercial activities adopted by each retailer. With regards this analysis of positioning, and Hypothesis H3 and its sub-hypotheses, we can say that they have been confirmed if we consider the relation between each outlet and three categories of commerce. The traditional shop and provisions market are associated with the category of “traditional commerce”, although above all the market obtains a clear differentiation with respect to certain attributes valued by some of the consumer groups, such as product and brand variety, prices, promotions and special offers, opening hours, convenience of purchase and services. The hypermarket and supermarket are associated with the so-called “modern commerce” and a supply oriented towards differentiation. The first of these stands out for additional services, convenience, decoration and product variety. The supermarket, in contrast, stands out essentially for product display and speed and convenience of purchase. The discount store is an outlet whose positioning is established above all in the category of modern commerce and supply oriented towards price. In conclusion and with regards possible future lines of research, analysing the situation of the retail commerce sector from a demand perspective under the consideration of a product in itself constitutes a basic element to consider, not only in terms of improving retail trade strategies, but also to orient policies regulating commercial activities. Three fundamental levels come into play in these policies: the political authorities, traders in general and consumers. In this respect, we consider that there might be a need for a model that can help the authorities responsible for commercial issues (in Spain this is largely the responsibility of the autonomous regions) to consider the aforementioned commercial policies.