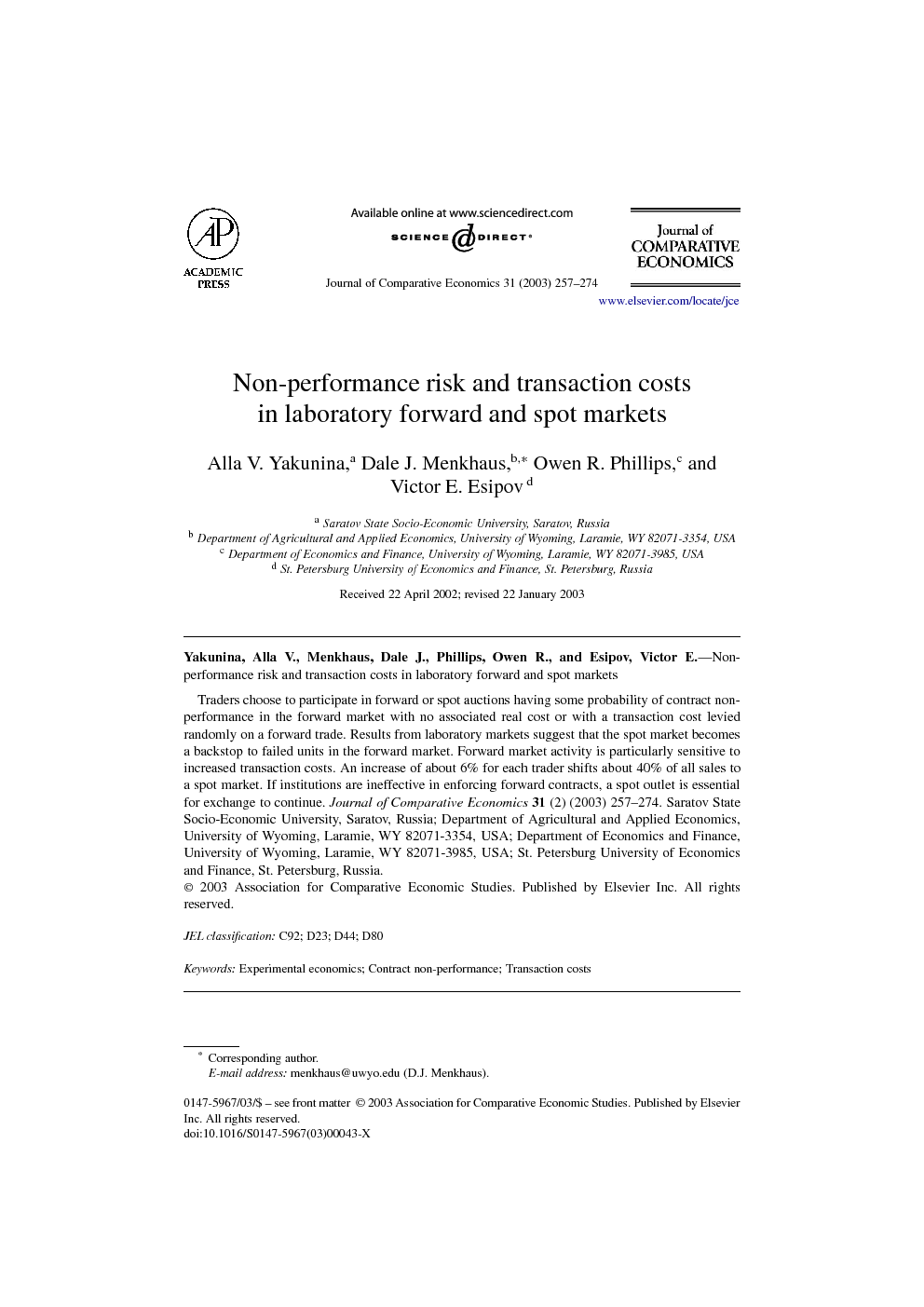 Traders choose to participate in forward or spot auctions having some probability of contract non-performance in the forward market with no associated real cost or with a transaction cost levied randomly on a forward trade. Results from laboratory markets suggest that the spot market becomes a backstop to failed units in the forward market. Forward market activity is particularly sensitive to increased transaction costs. An increase of about 6% for each trader shifts about 40% of all sales to a spot market. If institutions are ineffective in enforcing forward contracts, a spot outlet is essential for exchange to continue.

This study investigates the effects of contract non-performance in a forward auction market, when the forward market is linked with a spot auction market. Without a threat of random contract failures or unforeseen transaction costs, the majority of all sales are forward trades. Results from laboratory markets suggest that the spot auction market has a substantial option value to traders, when the forward contract fails or a transaction tax is levied. If failed sales in the forward market can be moved to the spot auction, total linked sales remain surprisingly stable and market outcomes are near the competitive equilibrium. Trading activity in the forward market tends to dominate trading in the spot market, regardless of non-performance risk. The fact that trades are dominant in the forward market, even when the probability of contract failure is high, suggests that sellers consider the spot market as a secondary, but important outlet. Because of the inherent risk that comes from potential inventory loss, the spot market is not the primary market due to the risk to producers of holding a perishable commodity. Adding a random 12.5% individual transaction tax to forward units reduces both total trades and total earnings. The decrease in total earnings from the increased transaction cost occurs primarily at the expense of sellers; buyers seem to compensate effectively through purchases at a lower forward price. About half of the forward trade activity in this environment moves to the spot market. The degree of substitution is determined by sellers comparing the implicit cost of making a sale in the forward market and paying the random tax with the cost of selling in the spot market and increasing an inventory cost. These results indicate the need to develop viable spot auction markets in transition economies because public institutions are ineffective in enforcing contracts. The importance of this is highlighted by recognizing that transition economies undergo significant changes that foster contract non-performance. Reforms privatize and split vertically integrated chains into smaller, independent enterprises. Hence, these enterprises must purchase inputs and sell their product in the market through forward or spot delivery methods. Without a legal system to enforce contract agreements, the incidence of non-performance increases in a forward transaction. The spot market can be a necessary building block for forward market development. However, spot auction markets have been slow to develop in these countries (Brezinski and Fritsch, 1997). In the absence of public enforcement institutions and spot auction markets, private mechanisms have emerged to enforce contracts. For example, a Slovakian food processor helps upstream farms pay for production inputs (Gow and Swinnen, 2001). In so doing, the processor increases the costs of contractual breach, making it more likely that the contract will be honored. Farm losses from delayed payments by such processors will also be reduced. The simultaneous reduction of the likelihood of a hold-up by processors and of its costs to producers induces farms to increase contract-specific investments. However, farms often do not deliver the quality or quantity agreed in the contract leading to a breach. Producers may also use inputs on other crops or sell them. Therefore, considerable adjustment of contracts over time is often required, reinforcing a need for spot auction markets. In Russia, two additional consequences of weak spot auctions are observable. First, producers have integrated vertically into processing, resulting in a significant decrease in products delivered to independent firms so that only 30 to 40% of the total production capacity of these firms were used in 1997 (Khlystun, 1997). Functioning centralized spot markets could maintain and promote a disintegrated market environment and ultimately a more competitive industry. Second, because of the high transaction costs of exchange resulting from the lack of institutions to support centralized markets and the fragile economic climate, an incentive arises for intermediary firms to form. These firms broker products between producers of raw materials and processors and between processors and consumers or other intermediaries, e.g., wholesalers and retailers. While brokers serve a useful role when transaction costs are high, the added layers increase the price of final delivery.