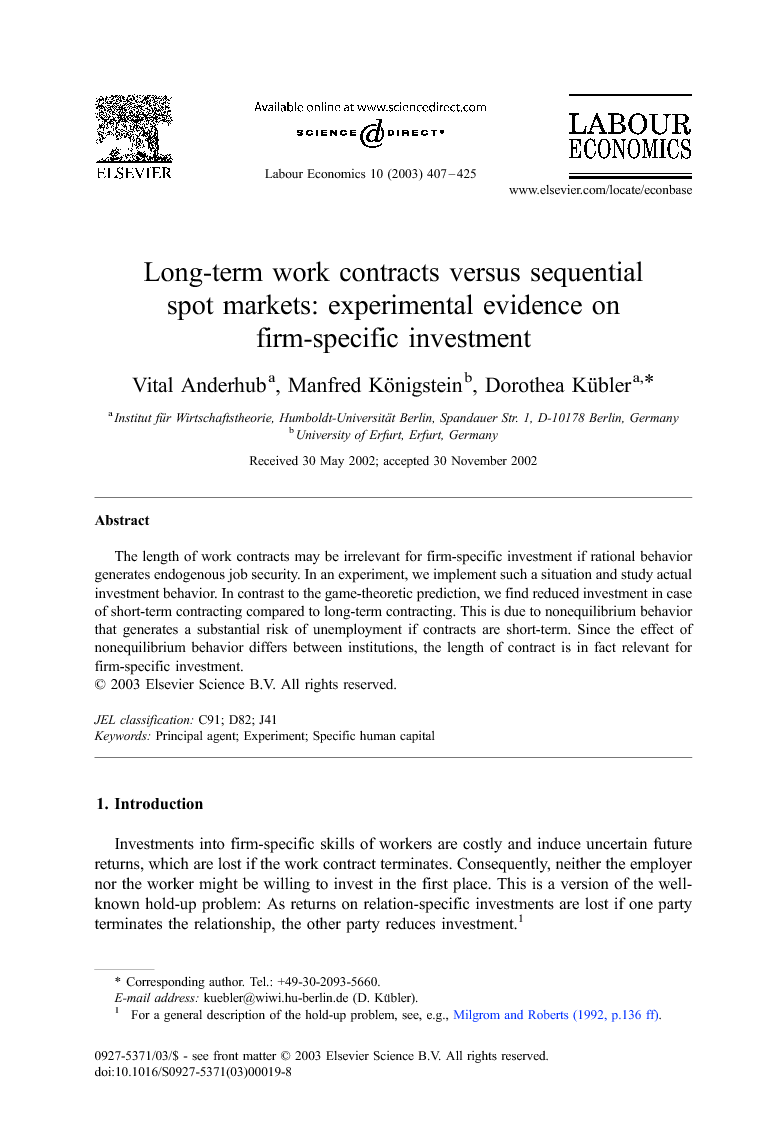 The length of work contracts may be irrelevant for firm-specific investment if rational behavior generates endogenous job security. In an experiment, we implement such a situation and study actual investment behavior. In contrast to the game-theoretic prediction, we find reduced investment in case of short-term contracting compared to long-term contracting. This is due to nonequilibrium behavior that generates a substantial risk of unemployment if contracts are short-term. Since the effect of nonequilibrium behavior differs between institutions, the length of contract is in fact relevant for firm-specific investment.

Investments into firm-specific skills of workers are costly and induce uncertain future returns, which are lost if the work contract terminates. Consequently, neither the employer nor the worker might be willing to invest in the first place. This is a version of the well-known hold-up problem: As returns on relation-specific investments are lost if one party terminates the relationship, the other party reduces investment.1 Consider the case where it is the worker who undertakes the relevant investment, for example he learns to operate a particular machine or develops a good relationship with colleagues or clients. In these instances, the hold-up problem can be avoided by the provision of job security, e.g., through a long-term work contract. Job security is also influenced by explicit dismissal rules as well as social norms such as “no discharge without cause”, governing termination of many employment relations in the U.S. While job security may increase efficiency due to larger investments into firm-specific human capital,2 it may also lead to lower work effort of employees (“shirking”).3 Furthermore, there might be situations where job security does not solve the investment problem4 or where the same level of investment may be achieved by sequential short-term contracts. The latter holds if the employer (the principal) benefits from the worker's firm-specific investment via rent sharing.5MacLeod and Malcomson (1989) demonstrate that an implicit contract providing job security for the worker is self-enforcing if the rent from the relationship is large enough. This suggests that job security may be irrelevant for firm-specific investments and that the design of labor market institutions may be guided solely by other considerations (e.g., to reduce shirking). However, these conclusions derive from theoretical models that rely on perfectly rational individuals. If actual behavior differs from theoretically assumed behavior, the conclusions may be invalid. Specifically, labor market institutions may differ systematically with respect to nonequilibrium behavior and economic policy analyses should take this into account. Our study is based on these intuitive arguments. Within a laboratory experiment, we investigate and compare the effectiveness of long-term contracts and sequential short-term contracts in inducing firm-specific investment. The experimental game is designed such that with perfectly rational agents, both types of contracts provide the same investment incentives. But they differ with respect to nonequilibrium choices. Nonequilibrium choices increase the risk of unemployment when the contract is short term. We show that this risk is substantial, but it is not large enough to solely account for the observed underinvestment. The data rather suggest that players hold too pessimistic beliefs about the risk of unemployment, which reduces investment incentives even further. Job security has also been investigated using cross-country data. Most studies focus on the influence of employment protection legislation on unemployment and turnover.6 Very few studies consider the impact of (endogenous) job security on firm productivity7, and we are not aware of any study trying to measure the impact of contract length on firm-specific skill formation by workers. This lack of empirical data might be due to difficulties in measuring firm-specific investment in natural environments. The experimental laboratory, however, allows for such measurement. The paper proceeds as follows: The next section introduces the model and characterizes the equilibrium. In Section 3, the experimental design is described. In 4, 5 and 6, we present the data and state our key findings as Result 1, Result 2, Result 3 and Result 4. Section 7 provides a discussion and some concluding remarks.

The impact of deviations from rationality on economic outcomes depends on the structure of social interaction. Camerer (1995) argues that “the institutional veils separating individuals doing business” may be thin or thick and that the “thickness of institutional veils is important because there is a strong intuition that institutional forces correct errors people make”. In this vein, we investigate two labor market institutions, long-term and short-term contracts, that induce different levels of firm-specific investment due to nonequilibrium behavior. Perfect equilibrium predicts the same level of investment for both types of contracts. Empirically, however, we find significantly lower investment rates for short-term contracts (Result 1). We show that due to nonequilibrium wage bids of outsiders, the risk of getting unemployed in period 2 is substantial under short-term work contracts (Result 2). Besides the systematic deviations from equilibrium behavior observed in the experiment, there are some findings that are qualitatively in line with equilibrium. As predicted by the theory, workers receive only a small fraction of the surplus (Result 3). Hence, wage bidding among the two workers is quite effective in driving down their surplus shares. We also find that in the majority of cases, the principal chooses short-term contracts rather than long-term contracts, thereby reducing efficiency but maximizing his earnings (Result 4). Taking things together, we propose that the finding of reduced investment under short-term contracting is driven (1) by the fact that nonequilibrium decisions occur sufficiently often; (2) by the differential impact of institutions (long-term versus short-term) on the risk of not being reemployed in the second period; (3) by the fact that this risk is anticipated; and (4) by the players' pessimistic beliefs. Nonequilibrium choices and biased (nonrational) beliefs are in our view not an artifact of the experimental laboratory, but must be taken into account in natural environments as well. Perceptions of job insecurity are the focus of recent field research. A British study indicates that the perceived job insecurity can be much higher than the real threat to lose one's job, and that there is a negative correlation between job insecurity and motivation at work.22 Also in the United States, employees' expectations to lose their job have been found to be exaggerated and overly pessimistic compared with the real probability of becoming unemployed.23 These findings are consistent with our explanation of the subjects' investment behavior in the experiment. A number of open questions remain. First, we do not investigate the case of exogenous contract lengths. It would be interesting to study whether the employer's choice of contract length in our setup has a different effect on investments than when the contract length is legally mandated. Second, in our experiment, the contract length could not be conditioned on the investment choice of the worker, i.e., the contract is incomplete.24 One could run a similar experiment without this restriction. Third, from a theoretical perspective, it may not make a difference whether the worker's investment decreases her effort cost or increases the employer's profit directly. However, there might be significant behavioral differences between the two situations that seem worth investigating.