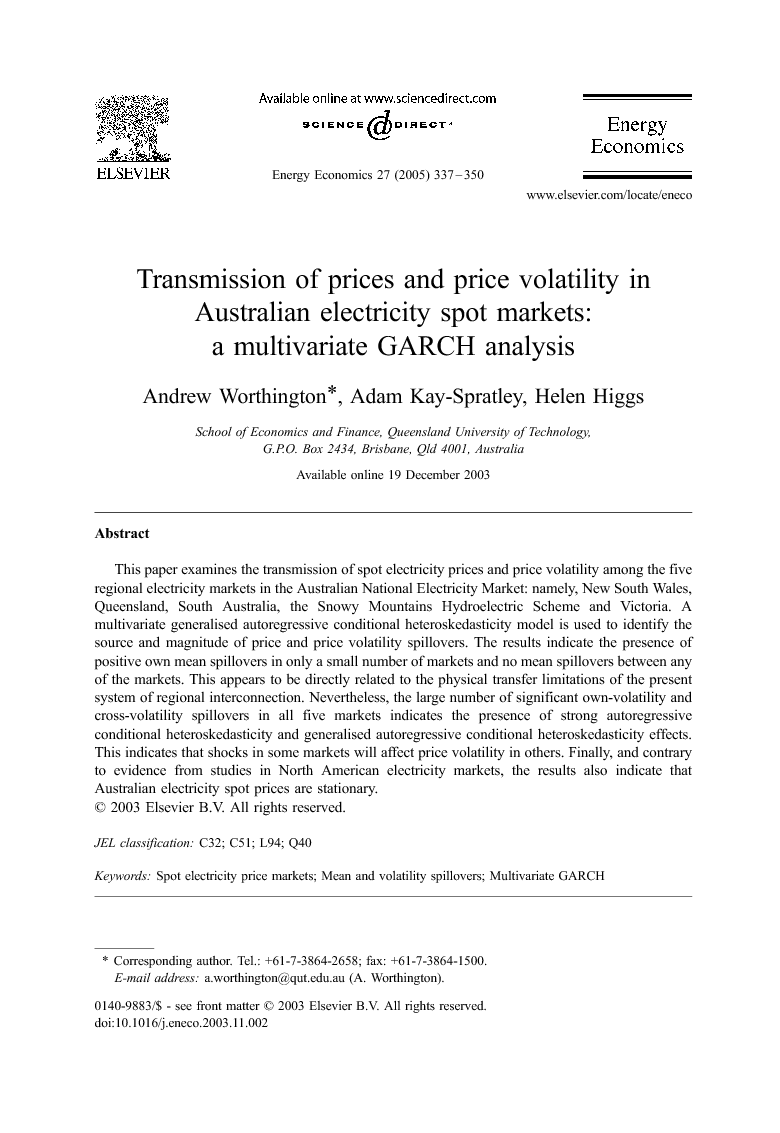 This paper examines the transmission of spot electricity prices and price volatility among the five regional electricity markets in the Australian National Electricity Market: namely, New South Wales, Queensland, South Australia, the Snowy Mountains Hydroelectric Scheme and Victoria. A multivariate generalised autoregressive conditional heteroskedasticity model is used to identify the source and magnitude of price and price volatility spillovers. The results indicate the presence of positive own mean spillovers in only a small number of markets and no mean spillovers between any of the markets. This appears to be directly related to the physical transfer limitations of the present system of regional interconnection. Nevertheless, the large number of significant own-volatility and cross-volatility spillovers in all five markets indicates the presence of strong autoregressive conditional heteroskedasticity and generalised autoregressive conditional heteroskedasticity effects. This indicates that shocks in some markets will affect price volatility in others. Finally, and contrary to evidence from studies in North American electricity markets, the results also indicate that Australian electricity spot prices are stationary.

This paper highlights the transmission of prices and price volatility among five Australian electricity spot markets during the period 1998+IBM-2001. All of these spot markets are member jurisdictions of the recently established NEM. At the outset, unit root tests confirm that Australian electricity spot prices are stationary. A MGARCH model is then used to identify the source and magnitude of spillovers. The estimated coefficients from the conditional mean price equations indicate that despite the presence of a national market for electricity, the regional electricity spot markets are not integrated. In fact, only two of the five markets exhibit a significant own mean spillover. This also would suggest, for the most part, that Australian spot electricity prices could not be usefully forecasted using lagged price information from either each market itself or from other markets in the national market. However, own-volatility and cross-volatility spillovers are significant for nearly all markets, indicating the presence of strong ARCH and GARCH effects. Conventionally, this is used to indicate that markets are not efficient. Strong own- and cross-persistent volatility are also evident in all Australian electricity markets. This indicates that while the limited nature of the interconnectors between the separate regional markets prevents full integration, shocks or innovations in particular markets still exert an influence on price volatility. Thus, during periods of abnormally high demand for example, the NEM may be at least partially offsetting the ability of regional participants to exert market power. Nonetheless, the results mainly indicate the inability of the existing network of interconnectors to create a substantially integrated NEM and that, for the most part, the sizeable differences in spot prices between most of the regions will remain, at least in the short term. This provides validation for new regional interconnectors currently under construction and those that are proposed, and the anticipated inclusion of Tasmania as a sixth region in the NEM. As a general rule, the less direct the interconnection between regions, the less significant the cross-innovation and volatility spillover effects between these regions. This suggests that main determinant of the interaction between regional electricity markets is geographical proximity and the number and size of interconnectors. Accordingly, it maybe unreasonable to expect that prices in electricity markets that are geographically isolated market will ever become fully integrated with +IBg-core+IBk or geographically proximate markets. The results also indicate that volatility innovations or shocks in all markets persist over time and that in all markets this persistence is more marked for own-innovations or shocks than cross-innovations or shocks. This persistence captures the propensity of price changes of like magnitude to cluster in time and explains, at least in part, the non-normality and non-stability of Australian electricity spot prices. Together, these indicate that neither the NEM nor the regional markets are efficiently pricing electricity and that changes to the market mechanism maybe necessary. It may also reinforce calls for the privatisation of some electricity market participants to improve competition, given that the overwhelming majority of these remain under public sector control. Of course, the full nature of the price and volatility interrelationships between these separate markets could be either under or overstated by mis-specification in the data, all of which suggest future avenues for research. One possibility is that by averaging the half-hourly prices throughout the day, the speed at which innovations in one market influence another could be understated. For instance, with the data as specified the most rapid innovation allowed in this study is a day, whereas in reality innovations in some markets may affect others within just a few hours. Similarly, there has been no attempt to separate the differing conditions expected between peak and off-peak prices. For example, De Vany and Walls, 1999a and De Vany and Walls, 1999b found that there were essentially no price differentials between trading points in off-peak periods because they were less constrained by limitations in the transmission system. Another possibility is that the occurrence of time-dependent conditional heteroskedasticity could be due to an increased volume of trading and/or variability of prices following the arrival of new information into the market. It is well known that financial markets, for instance, can still be efficient but exhibit GARCH effects in price changes if information arrives at uneven intervals. One future application of modelling would then include, say, demand volume as a measure of the amount of information that flows into the electricity market. This would provide definitive proof of whether the GARCH effects are really evidence of market inefficiency, or the result of the irregular flow of market information. Research into Australian electricity markets could be extended in a number of other ways. One useful extension would be to examine each of the five electricity markets individually and in more detail. For example, while the sample for this study is determined by the period of tenure of the NEM wholesale electricity spot markets in the separate regions pre-date this by several years. An examination of the connection between the long-standing electricity spot markets in NSW and VIC would be particularly useful. Another suggestion concerns the electricity strip contracts offered by the SFE (2002) on several of Australia's NEM jurisdictions. An examination of the relationships between Australian spot and derivative electricity prices would then be interesting.