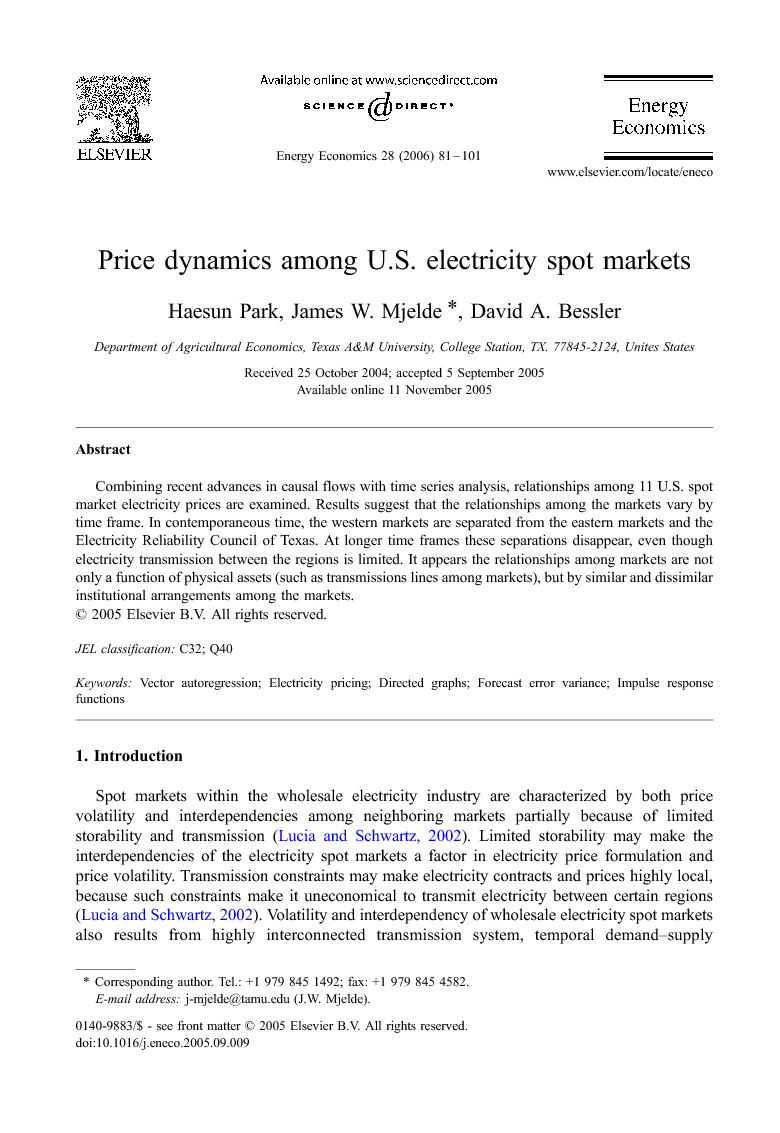 Combining recent advances in causal flows with time series analysis, relationships among 11 U.S. spot market electricity prices are examined. Results suggest that the relationships among the markets vary by time frame. In contemporaneous time, the western markets are separated from the eastern markets and the Electricity Reliability Council of Texas. At longer time frames these separations disappear, even though electricity transmission between the regions is limited. It appears the relationships among markets are not only a function of physical assets (such as transmissions lines among markets), but by similar and dissimilar institutional arrangements among the markets.

Spot markets within the wholesale electricity industry are characterized by both price volatility and interdependencies among neighboring markets partially because of limited storability and transmission (Lucia and Schwartz, 2002). Limited storability may make the interdependencies of the electricity spot markets a factor in electricity price formulation and price volatility. Transmission constraints may make electricity contracts and prices highly local, because such constraints make it uneconomical to transmit electricity between certain regions (Lucia and Schwartz, 2002). Volatility and interdependency of wholesale electricity spot markets also results from highly interconnected transmission system, temporal demand–supply imbalance, and transmission congestion. Accordingly, electricity prices may behave unlike any other commodity market (Weron and Przybylowicz, 2000). With utility retail sales amounting to more than 3% of the U.S. gross domestic product (White, 1996), the electric power industry is vital to the economy. Historically, one of the most highly regulated sectors of the U.S. economy, the electric power industry has undergone many structural changes, such as restructuring and deregulation over the past decade. As a result, a more competitive market environment is developing. These market changes imply that price determination is more likely to be placed in the hands of the market than regulators. Analyzing spot market price discovery is important for decision and policy makers because of the structural change the industry is undergoing and the importance of the industry. The objective of this study is to characterize the dynamic relationships among 11 major electricity spot markets in the U.S. and to examine each individual market's role in price discovery. This study, therefore, focuses on spot prices rather than the factors affecting the prices. Providing information on the dynamics of electricity prices allows a better understanding of how price innovations in one spot market affect the other markets and their interaction. In addition, this study addresses the following questions. Do certain markets have more influence on price than others? What markets play the role of price leadership? This study is the first attempt to describe the dynamic relationships at the national level among the U.S. electricity spot markets. To this end, this study presents empirical findings on the contemporaneous and short-run interdependencies using a vector autoregressive model, causal flows based on directed acyclic graphs, and innovation accounting analysis. To our knowledge, no study to date has examined electricity price interdependencies at the U.S. national level. Further, no study has examined electricity price interdependencies over such an expansive geographical area. The U.S. includes three main power grids, ten different electric reliability councils, and hundreds, if not thousands, of entities involved in generation, transmission, and distribution.