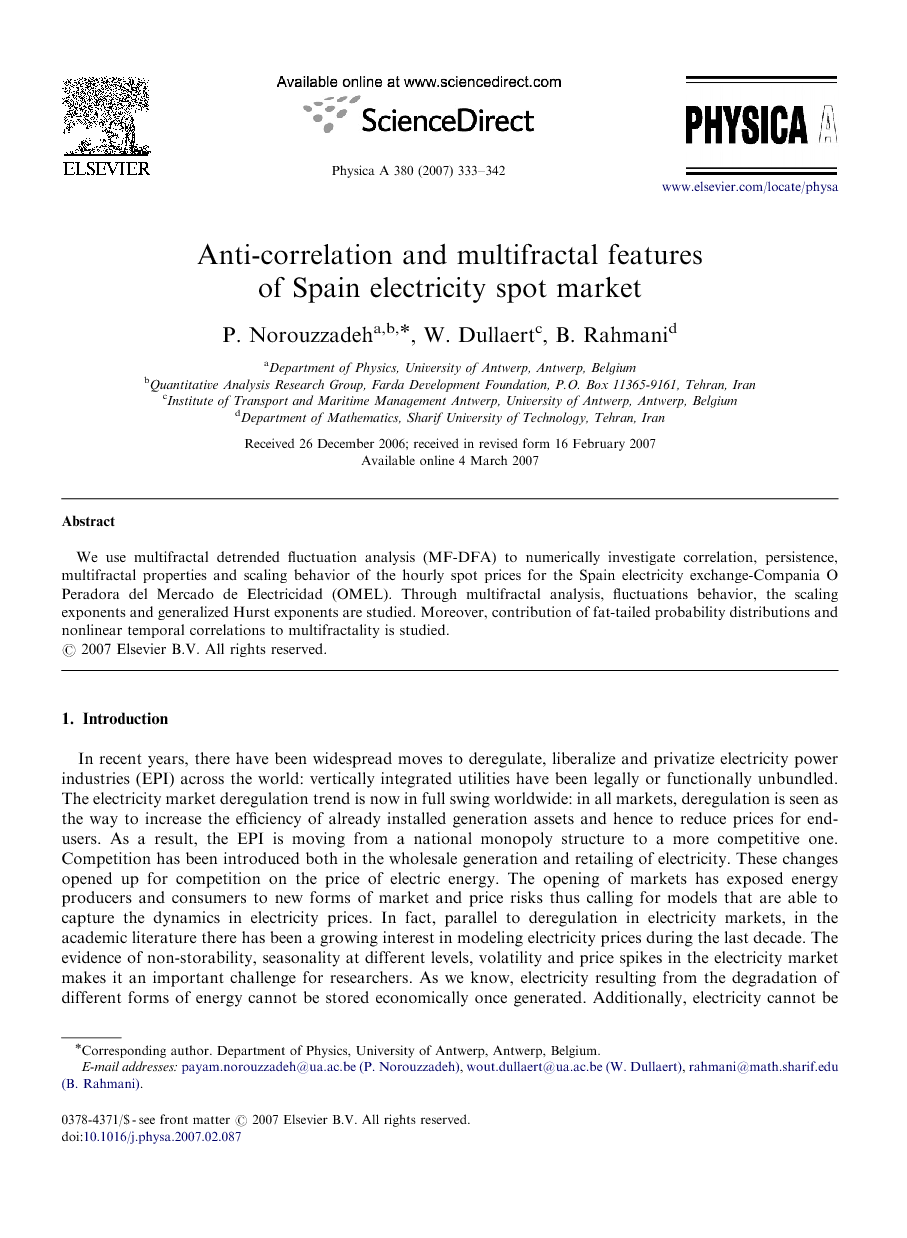 In recent years, there have been widespread moves to deregulate, liberalize and privatize electricity power industries (EPI) across the world: vertically integrated utilities have been legally or functionally unbundled. The electricity market deregulation trend is now in full swing worldwide: in all markets, deregulation is seen as the way to increase the efficiency of already installed generation assets and hence to reduce prices for end-users. As a result, the EPI is moving from a national monopoly structure to a more competitive one. Competition has been introduced both in the wholesale generation and retailing of electricity. These changes opened up for competition on the price of electric energy. The opening of markets has exposed energy producers and consumers to new forms of market and price risks thus calling for models that are able to capture the dynamics in electricity prices. In fact, parallel to deregulation in electricity markets, in the academic literature there has been a growing interest in modeling electricity prices during the last decade. The evidence of non-storability, seasonality at different levels, volatility and price spikes in the electricity market makes it an important challenge for researchers. As we know, electricity resulting from the degradation of different forms of energy cannot be stored economically once generated. Additionally, electricity cannot be transported from one region (country) to another one, because of existing bottlenecks, or limited transportation capacity. This implies that prices are dependent on a local demand and supply. As demand for energy is highly influenced by (cyclical) exogenous factors such as e.g. the weather, energy prices tend to fluctuate cyclically. Moreover, electricity prices have a high volatility which is variable over time [1]. In addition, volatility tends to increase with prices, a phenomenon known under the name of volatility clustering. Consequently, electricity prices experience higher volatility during peak hours (period of the day displaying the highest energy consumption and energy prices) than in off-peak hours. Moreover, electricity prices are spiky, resulting from generation or transmission outages, or from sudden and unanticipated changes in the demand [2]. Therefore, modeling electricity prices is particularly challenging and has inspired a variety of different lines of models. So far, there does not seem to be much consensus on which line of modeling to prefer as they tend to focus on different aspects of electricity prices. Recently, the statistical properties of electricity prices have been investigated by some methods in chaos theory, multifractal analysis, long memory analysis and other stochastic methods for managing electricity price risk, valuing electricity derivatives and predicting future prices [3], [4], [5], [6] and [7]. The multifractal detrended fluctuation analysis (MF-DFA) method allows us to determine the multifractal characterization of non-stationary and stationary time series. Applying the concept of MF-DFA to electricity spot prices can be used to gain deeper insight into the processes occurring its non-stationary dynamic market system. In fact, the main characteristics of financial time series like as fat-tailness of probability distributions and volatility clustering have been factored into risk management instruments, such as hedging contracts. Ignoring theseproperties can make pricing of derivative contracts unreliable, and at best difficult to parametrize. Multifractal data exhibit fat-tailed probability distributions and clustered volatility, so, all of these properties can be described using the techniques of multifractal analysis. In this paper, we would like to characterize the complex behavior of Spain's electricity market prices through the computation of the time series scaling exponents which quantify its correlation exponents and multifractality. New mathematical methods based on multifractals can more robustly model derivative prices, by properly characterizing volatility. Multifractal models can correctly reproduce and characterize the statistical properties of systems such as financial markets. Multifractal methods provide powerful tools for analyzing very volatile series like electricity prices. The paper is organized as follows. The data used to investigate the multifractal nature of price fluctuations in the Spanish electricity market are described in Section 2. In Section 3 we briefly describe the MF-DFA method. Sources of multifractality in the electricity prices are studied in Section 4 by comparing the MF-DFA results for the original data set to those obtained for shuffled and phase randomized (surrogate) time series. Section 5 concludes with a discussion of the main findings and offers directions for further research.

The multifractal properties of the electricity spot price logarithmic increments of the electricity market of mainland Spain, OMEL, have been studied in this paper through multifractal detrended fluctuation analysis. Applying the MF-DFA2 method on OMEL data, demonstrated that the hourly time series is a non-stationary time series with anti-persistent self-affine walk in time ranging from days to years. Therefore, the increments in the spot price process are anti-correlated over the same time scales. The q dependence of h(q)h(q) and τ(q)τ(q) indicated that the hourly increments of OMEL time series have multifractal behavior. In fact, it is shown that the time series for OMEL increments exhibit the characteristics that can be interpreted in terms of multifractality. The results obtained seem to reasonably confirm that modeling efforts should concentrate towards models that are able to incorporate multiscaling features. Our findings lead at least to two economic results. At first, as we know, such anti-correlations are rather atypical for financial time series, therefore, there are some arbitrage opportunities due to anti-correlated increments. By adapting an investment strategy that takes anti-correlations into consideration, they will most likely vanish. However, there seems at present to be no profit opportunity created by the anti-correlation in the spot price increments. If technological advances in the future allow for an efficient storage of electricity, the situation will probably be quite different. Secondly, given that data are multifractal, it is then straightforward to exploit multifractal models to calculate the worth of derivative contracts such as options. From the point of view of setting fixed-price contracts or estimating levels of risk in exposure to the electricity market, the multifractal approach provides a useful method via which one may estimate likely future electricity prices based on current circumstances. By comparing the generalized Hurst exponents of the original time series with the shuffled and surrogate one's, we have found that multifractality due to the long-range correlations has less contribution than the broadness of the probability density function. Moreover, although most multifractality of the OMEL increments data is due to the shape of the probability distribution function, also different long-range correlations for small and large fluctuations contribute to the multifractal behavior of the time series. Finally, it must be mentioned that the results offer additional arguments for including multifractal and multiscale features in stochastic pricing modeling.