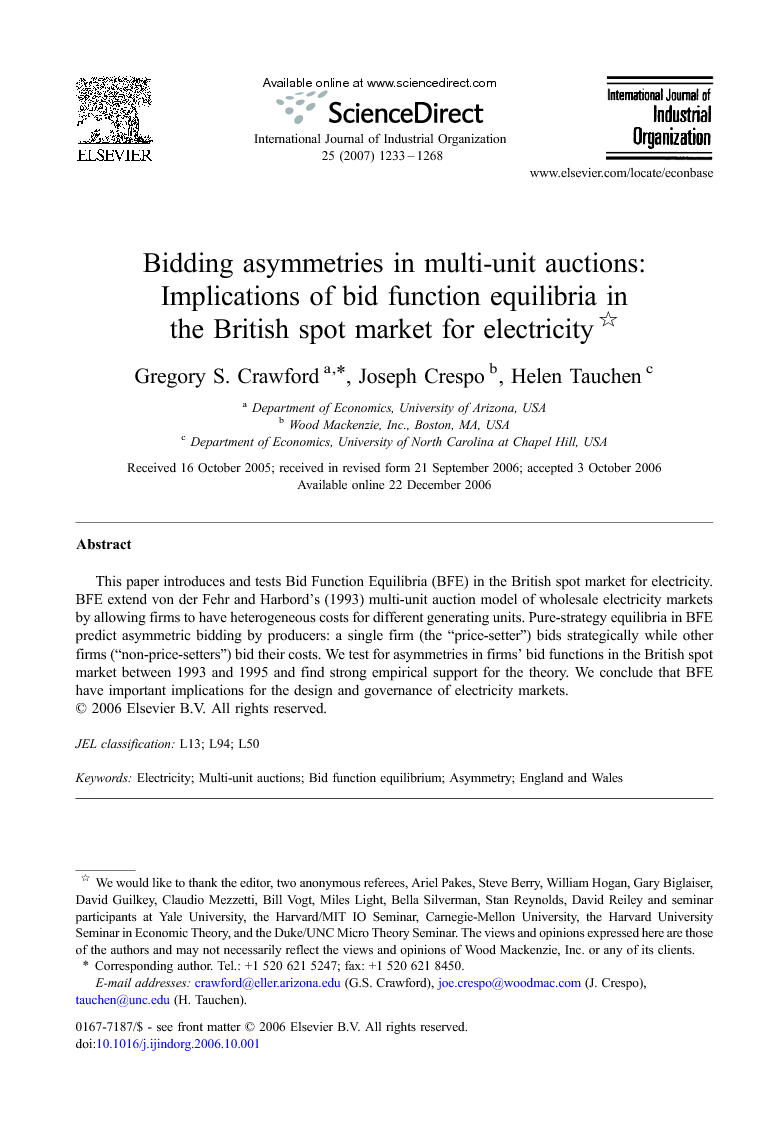 This paper introduces and tests Bid Function Equilibria (BFE) in the British spot market for electricity. BFE extend von der Fehr and Harbord's (1993) multi-unit auction model of wholesale electricity markets by allowing firms to have heterogeneous costs for different generating units. Pure-strategy equilibria in BFE predict asymmetric bidding by producers: a single firm (the “price-setter") bids strategically while other firms (“non-price-setters") bid their costs. We test for asymmetries in firms' bid functions in the British spot market between 1993 and 1995 and find strong empirical support for the theory. We conclude that BFE have important implications for the design and governance of electricity markets.

The purpose of this paper is to provide an explanation of firm behavior in wholesale electricity markets. We do this by testing the implications of Bid Function Equilibria in the England and Wales spot market for electricity. The primary implication of BFE is the presence of asymmetries in bidding behavior between the firm that sets the clearing price (the price-setter) and all other firms (non-price-setters). Using data on bid functions between 1993 and 1995, we find strong empirical support for the theory. Strong and persistent asymmetries exist in bid functions consistent with strategic bidding by price-setters in a Bid Function Equilibrium. BFE have several important implications regarding the efficient regulation of wholesale electricity markets. First, it offers important insights into the tradeoff between short- and long-run efficiency in these markets. In a seminal paper, Christensen and Greene (1976) found that “technological change unrelated to increases in scale deserves the primary attribution for… declines in the cost of [electricity] production.” This discovery was used to promote competition in generation and ultimately the deregulation of electricity markets the world over. Today, there is a great deal of energy devoted to mitigating short-run market power, independent of the industry's long-run objectives. While our estimates of markups (on the order of 22–23%) are significant, they are less than the 30% or more by which average costs of generation exceed marginal costs. Given that fixed cost recovery is essential to promoting new efficient technologies, BFE support the conclusion that, under normal market conditions, markups are likely to be in a range that promotes fixed cost recovery without necessarily leading to above-normal profits. That being said, the frequency of corner solutions in the simulations, although less likely in today's less concentrated markets, highlights the importance of mitigating market power when one (“pivotal”) supplier has an incentive to exploit capacity constraints.48 Finally, if divestiture is being considered as a way to address market power, BFE indicate that targeting specific generating units (e.g. intermediate versus baseload capacity) can significantly enhance market performance. There are many possible extensions of this research. The most immediate application would be for use in other wholesale electricity markets. For example, in recent years there has been an emergence of a literature examining market power issues in the newer California deregulated market for electricity (Borenstein and Bushnell, 1999, Borenstein et al., 2002 and Wolak, 2000). Similar issues have arisen in the New England (NEISO), New York ISO (NYISO) and the Pennsylvania, New Jersey, and Maryland (PJM) markets (e.g. Mansur, 2005). Although BFE would have to be generalized to include idiosyncratic aspects of these markets, its basic features would remain. Even more promising is to address issues of market power during periods of high demand by incorporating Bid Function Equilibria in a structural model of short-run strategic availability decisions by generators. Similarly, the wealth of data and repeat nature of play in electricity markets provide ample opportunity to study explicit or tacit collusion in the market (e.g. Puller, in press and Sweeting, 2005). BFE would assist these efforts by characterizing outcomes in downstream stages (i.e. conditional on availability or as the punishment stage in a repeated game), enabling the analysis to focus on such higher-order strategic incentives.