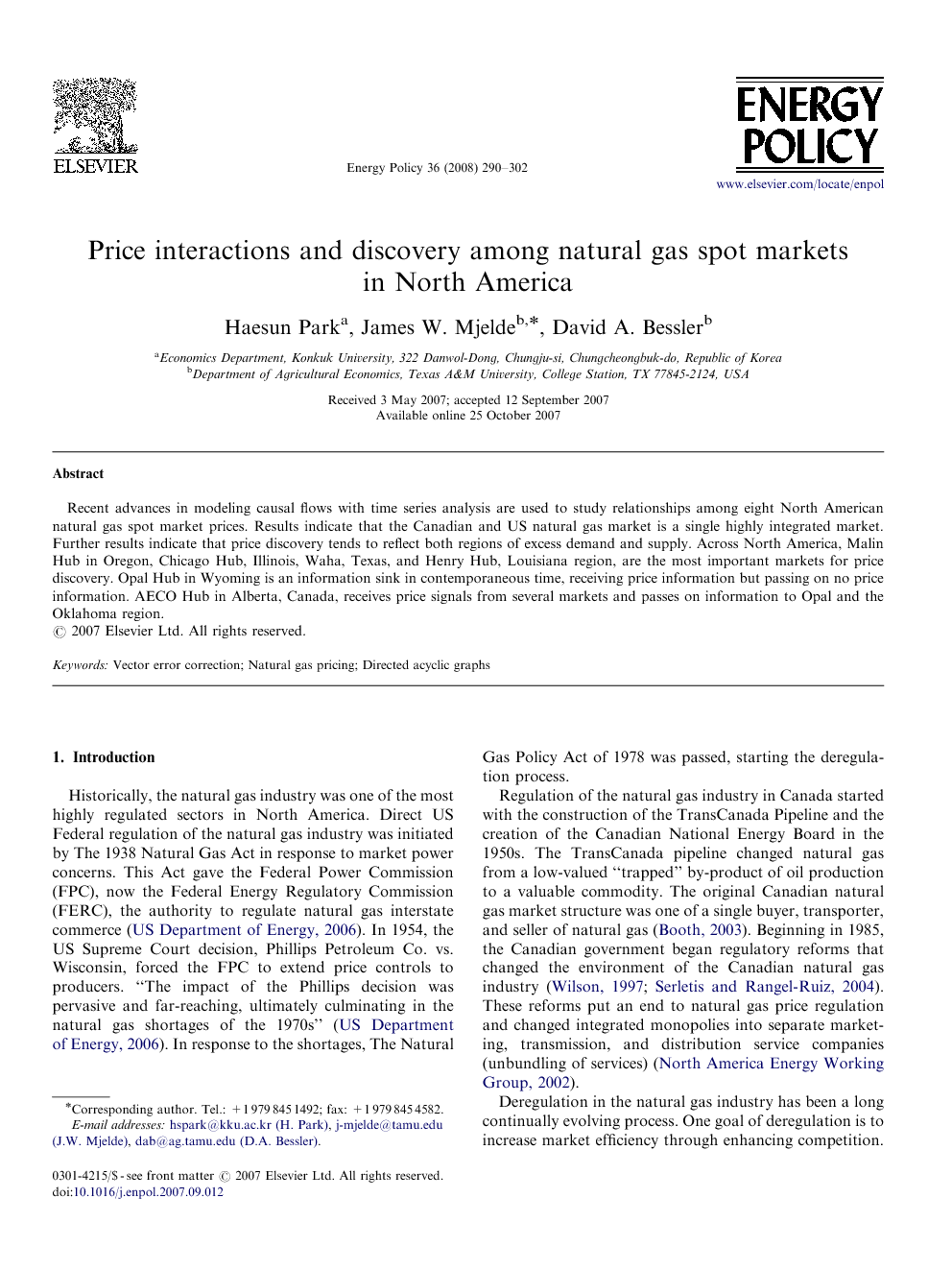 Recent advances in modeling causal flows with time series analysis are used to study relationships among eight North American natural gas spot market prices. Results indicate that the Canadian and US natural gas market is a single highly integrated market. Further results indicate that price discovery tends to reflect both regions of excess demand and supply. Across North America, Malin Hub in Oregon, Chicago Hub, Illinois, Waha, Texas, and Henry Hub, Louisiana region, are the most important markets for price discovery. Opal Hub in Wyoming is an information sink in contemporaneous time, receiving price information but passing on no price information. AECO Hub in Alberta, Canada, receives price signals from several markets and passes on information to Opal and the Oklahoma region.

Historically, the natural gas industry was one of the most highly regulated sectors in North America. Direct US Federal regulation of the natural gas industry was initiated by The 1938 Natural Gas Act in response to market power concerns. This Act gave the Federal Power Commission (FPC), now the Federal Energy Regulatory Commission (FERC), the authority to regulate natural gas interstate commerce (US Department of Energy, 2006). In 1954, the US Supreme Court decision, Phillips Petroleum Co. vs. Wisconsin, forced the FPC to extend price controls to producers. “The impact of the Phillips decision was pervasive and far-reaching, ultimately culminating in the natural gas shortages of the 1970s” (US Department of Energy, 2006). In response to the shortages, The Natural Gas Policy Act of 1978 was passed, starting the deregulation process. Regulation of the natural gas industry in Canada started with the construction of the TransCanada Pipeline and the creation of the Canadian National Energy Board in the 1950s. The TransCanada pipeline changed natural gas from a low-valued “trapped” by-product of oil production to a valuable commodity. The original Canadian natural gas market structure was one of a single buyer, transporter, and seller of natural gas (Booth, 2003). Beginning in 1985, the Canadian government began regulatory reforms that changed the environment of the Canadian natural gas industry (Wilson, 1997; Serletis and Rangel-Ruiz, 2004). These reforms put an end to natural gas price regulation and changed integrated monopolies into separate marketing, transmission, and distribution service companies (unbundling of services) (North America Energy Working Group, 2002). Deregulation in the natural gas industry has been a long continually evolving process. One goal of deregulation is to increase market efficiency through enhancing competition. An outcome has been the development of market centers and hubs, which serve as natural gas spot markets. These market centers and hubs (henceforth markets) are located at the intersection of major pipeline systems and within major producing regions (US Department of Energy, 2004). If deregulation is achieving its goal, the North American markets should be highly integrated. Market integration is one important indicator of market competitiveness and allocative efficiency. Evidence on market integration, however, is conflicting. Cuddington and Wang (2006) and King and Cuc (1996), for example, discuss an east–west split in North American gas markets, whereas Serletis (1997) did not find such a split. The objectives of the current study are to characterize the dynamic integration among major natural gas spot markets in North America and to investigate each individual market's role in price discovery using data removed from the major deregulation policies. The current study differs from the growing literature on natural gas markets in several ways. Most important, this study is the first study to describe the structure of dynamic interactions among North America natural gas spot markets by combining recent advances in modeling causal flows with time series analysis. A vector error correction model provides the basis for empirical results on the interdependencies among the natural gas markets. In addition to the usual innovation accounting analysis, contemporaneous causal flows based on directed acyclic graphs are presented. The study provides a dynamic picture of daily information flow among eight North American natural gas spot markets for the recent past (1998–2007). The eight markets were chosen to provide geographical diversity, while accounting for data availability. Previous studies have not considered such a widespread geographical dispersion simultaneously among many markets. The current study does not analyze the spot markets using bivariate approaches, but rather all eight markets are included in the analysis in a more general multivariate framework. Another important difference between some of the previous literature and the current study is that the current study uses daily data instead of weekly or monthly data used by many previous studies. Taylor (2001) concludes that temporal aggregation problems arise when using monthly data to attempt to identify rapid price adjustments. Data used for analysis need to reflect institutional context and logistical framework of the markets being examined. Further, Brinkmann and Rabinovitch (1995) note that a problem with daily natural gas prices in the years immediately following the development of the spot markets was the lack of price fluctuations because of infrequent trading. Of particular relevance is that the data used in the current study are removed from the early years of the spot market development. More recent data reflect the continued reactions to evolving regulations and market conditions by participants, thereby giving a clearer picture if the markets are integrated. New regulations, such as FERC's Order 637, which is an attempt to update gas pipeline operations and increase the level of transparency (US Department of Energy, 2006), continue to define the gas market. Further, changes in total US pipeline capacity are reflected in the more recent data. Interstate pipeline capacity increased by 17% in the 7-year period 1991–1997 (6% between 1994 and 1997), but increased 19% in the 5-year period 1998–2004 included in our price data. The year with the largest increase is 2002 (Tobin, 2006). In addition, Moss (2007) reports that the Herfindahl–Hirschman Index for the US natural gas pipeline industry increased by 10% between 1992 and 1997, but increased by 33% between 1997 and 2001 to over 1800, indicating a highly concentrated industry. The more recent data also reflect changes in the Canadian market such as transportation reform in the early 1990s (Booth, 2003) and increases in exports to the US (Vollman, 1996). Finally, daily aggregate weather effects are included as exogenous variables in the current study, which are absent in previous time series analysis of natural gas markets.