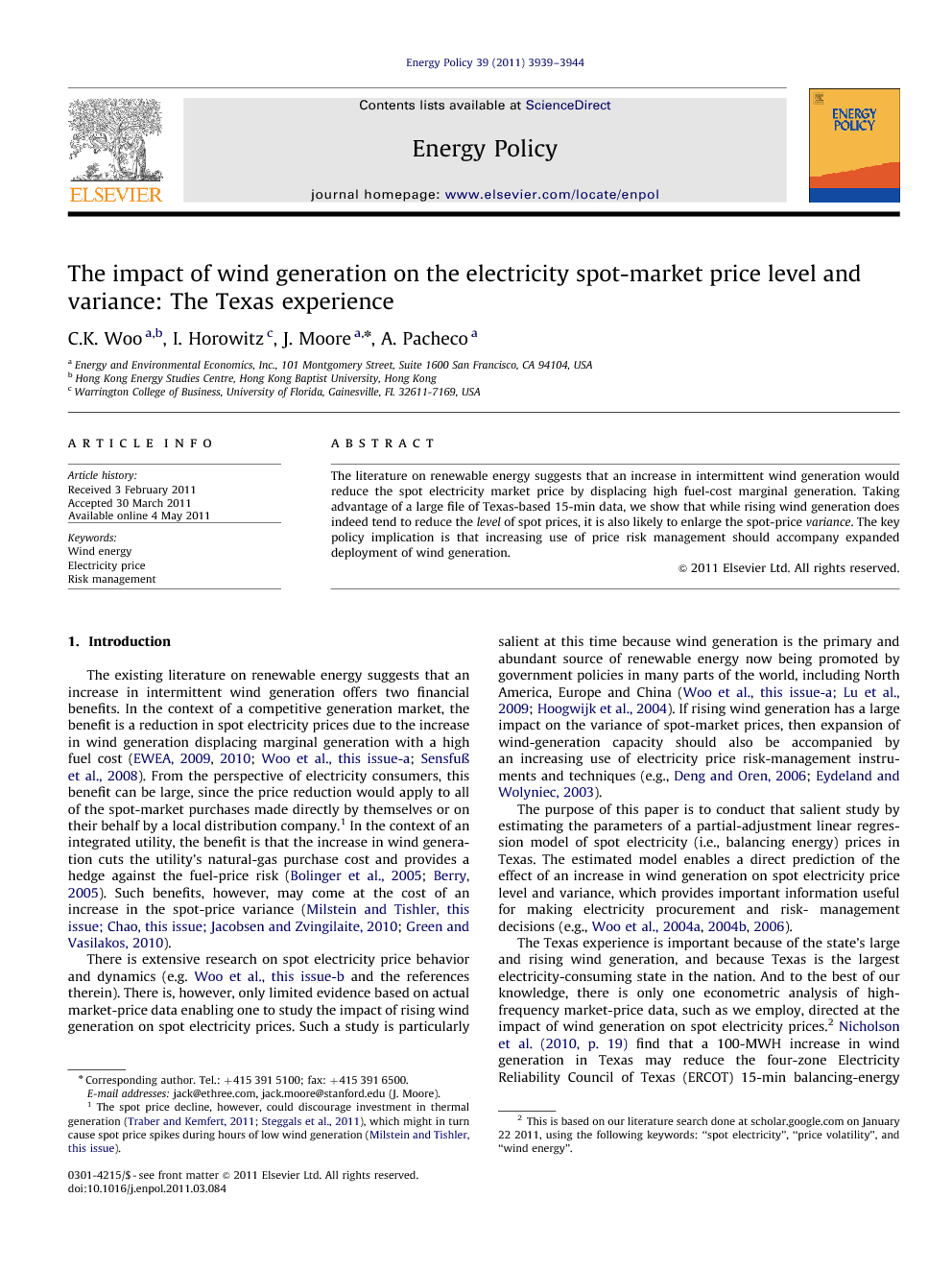 The literature on renewable energy suggests that an increase in intermittent wind generation would reduce the spot electricity market price by displacing high fuel-cost marginal generation. Taking advantage of a large file of Texas-based 15-min data, we show that while rising wind generation does indeed tend to reduce the level of spot prices, it is also likely to enlarge the spot-price variance. The key policy implication is that increasing use of price risk management should accompany expanded deployment of wind generation.

The existing literature on renewable energy suggests that an increase in intermittent wind generation offers two financial benefits. In the context of a competitive generation market, the benefit is a reduction in spot electricity prices due to the increase in wind generation displacing marginal generation with a high fuel cost (EWEA, 2009, EWEA, 2010, Woo et al., this issue-a and Sensfuß et al., 2008). From the perspective of electricity consumers, this benefit can be large, since the price reduction would apply to all of the spot-market purchases made directly by themselves or on their behalf by a local distribution company.1 In the context of an integrated utility, the benefit is that the increase in wind generation cuts the utility's natural-gas purchase cost and provides a hedge against the fuel-price risk (Bolinger et al., 2005 and Berry, 2005). Such benefits, however, may come at the cost of an increase in the spot-price variance (Milstein and Tishler, forthcoming, Chao, forthcoming, Jacobsen and Zvingilaite, 2010 and Green and Vasilakos, 2010). There is extensive research on spot electricity price behavior and dynamics (e.g. Woo et al., this issue-b and the references therein). There is, however, only limited evidence based on actual market-price data enabling one to study the impact of rising wind generation on spot electricity prices. Such a study is particularly salient at this time because wind generation is the primary and abundant source of renewable energy now being promoted by government policies in many parts of the world, including North America, Europe and China (Woo et al., this issue-a, Lu et al., 2009 and Hoogwijk et al., 2004). If rising wind generation has a large impact on the variance of spot-market prices, then expansion of wind-generation capacity should also be accompanied by an increasing use of electricity price risk-management instruments and techniques (e.g., Deng and Oren, 2006 and Eydeland and Wolyniec, 2003). The purpose of this paper is to conduct that salient study by estimating the parameters of a partial-adjustment linear regression model of spot electricity (i.e., balancing energy) prices in Texas. The estimated model enables a direct prediction of the effect of an increase in wind generation on spot electricity price level and variance, which provides important information useful for making electricity procurement and risk- management decisions (e.g., Woo et al., 2004a, Woo et al., 2004b and Woo et al., 2006). The Texas experience is important because of the state's large and rising wind generation, and because Texas is the largest electricity-consuming state in the nation. And to the best of our knowledge, there is only one econometric analysis of high-frequency market-price data, such as we employ, directed at the impact of wind generation on spot electricity prices.2Nicholson et al. (2010, p. 19) find that a 100-MWH increase in wind generation in Texas may reduce the four-zone Electricity Reliability Council of Texas (ERCOT) 15-min balancing-energy market price by $0.71/MWH in the Houston zone, $0.07/MWH in the North zone, $0.57/MWH in the South zone, and $1.18/MWH in the West zone where nearly all wind generation resides. What is not known is what the same 100-MWH may do to the ERCOT's zonal price variance. We take advantage of a unique and rich ERCOT data base fully described in Woo et al. (this issue-b). The data comprise 15-min electricity prices in each of the four ERCOT zones, observed over the 41-month period of January 2007 through May 2010. Seldom available elsewhere, this data base has four distinct features that aid our detection of the price effects of wind generation (Sioshansi and Hurlbut, 2010; Woo et al., this issue-b; Zarnikau, this issue): • The installed capacity of wind generation grew during the 11-year period of 1999–2009 from less than 500 to over 7500 MW, and now accounts for about 10% of ERCOT's total generation capacity of approximately 80,000 MW. When combined with the intermittence of wind generation, this feature leads to widely dispersed levels of wind-energy output, a requisite for statistically precise detection of its effect on market prices. • Wind generators have a tax-credit incentive to make very low, even negative supply bids, so as to be treated as must-run and dispatched by the ERCOT independent system operator. This feature helps unmask the price effects of wind generation, not confounded by the generators' bidding behaviors. • ERCOT's marginal generation in the non-West zones is likely to be natural-gas fired and dispatchable, offering ample opportunity for spot-price reductions through its displacement by wind generation. If the marginal generation were must-run and non-dispatchable (e.g., nuclear or run-of-river hydro), wind generation might not have a detectable price effect because the marginal supply bid and the resulting market-clearing price would have been close to zero. • ERCOT's 15-min zonal loads are price-insensitive and therefore can be used as exogenous variables to delineate market price movements due to fluctuating demands (ERCOT, 2004). This feature leads us to suggest that a detected price effect of wind generation could not have been biased by the possible price response of zonal loads. As will be shown, the ERCOT data base enables us to confirm that while rising wind generation tends to reduce the level of spot prices, it also tends to enlarge the spot-price variance. The key policy implication is that increasing effort in price risk management should accompany expanded deployment of wind generation.

Using the large ERCOT data base, we estimate four zonal price regressions to confirm that while increases in wind generation tend to reduce the level of electricity spot prices they also tend to enlarge the spot-price variance. Thus, as more wind-generation capacity is installed in an electrical system and utilities increasingly rely on wind generation, that increasing reliance would have serious implications for both expected electricity spot prices and their variances. Policy makers and market agents, as well as consumers, will welcome the prospect of lower prices, and many environmentalists will likely support the increasing reliance on this price-reducing source of renewable energy. These benefits, however, are accompanied by an additional challenge for policy makers and utility managers: notably, dealing with the increased price risk implied by the increased price variance that is inseparable from increased reliance on what is an inherently intermittent source of generation. To meet that challenge, the principal actors will need to expend increased effort in risk management and become increasingly familiar, in particular, with the financial instruments that have proved their worth in the financial sector. The expectation, in this context at least, is that familiarity will breed increasing comfort with using those instruments to the ultimate benefit of consumers.