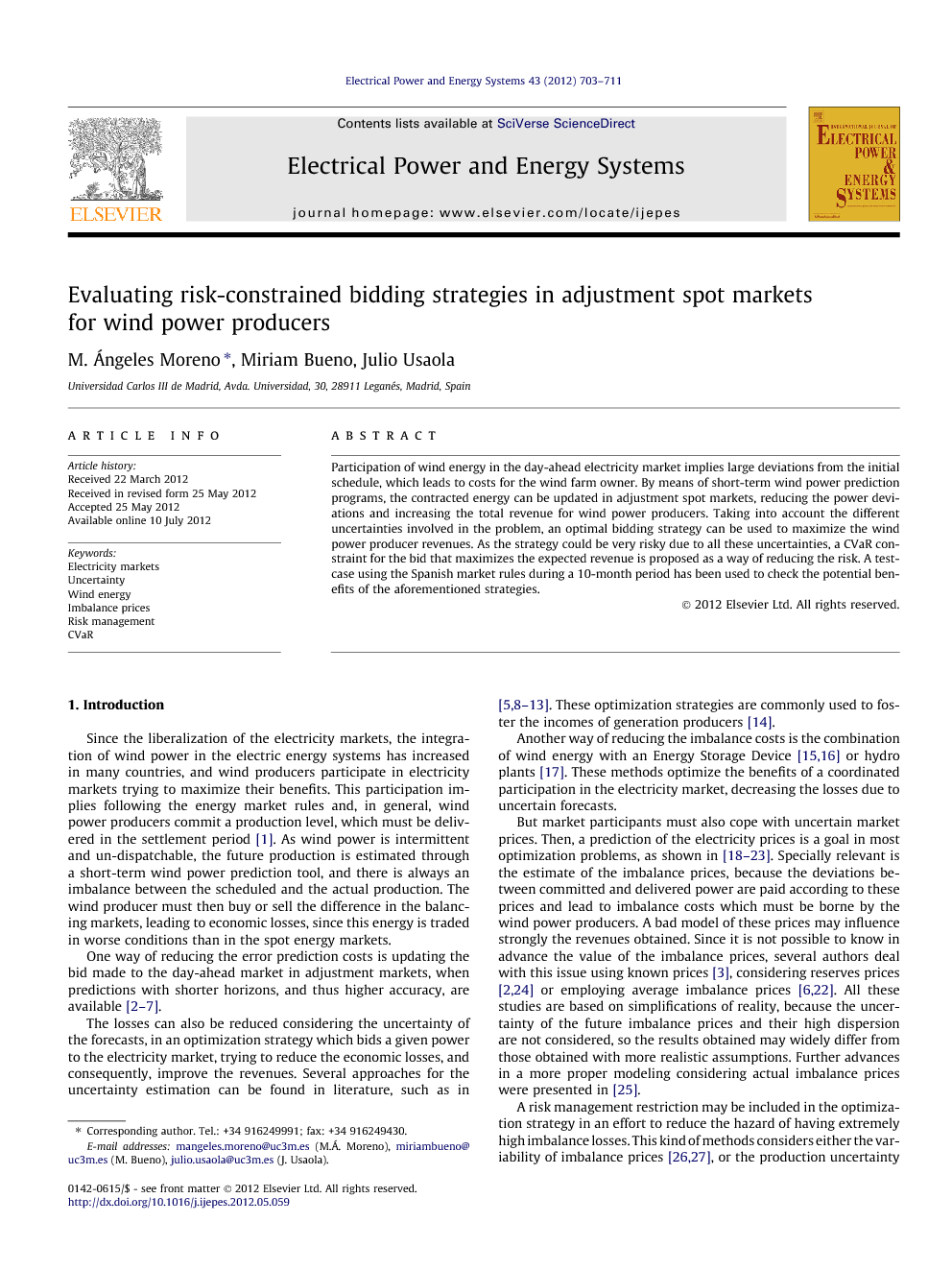 Participation of wind energy in the day-ahead electricity market implies large deviations from the initial schedule, which leads to costs for the wind farm owner. By means of short-term wind power prediction programs, the contracted energy can be updated in adjustment spot markets, reducing the power deviations and increasing the total revenue for wind power producers. Taking into account the different uncertainties involved in the problem, an optimal bidding strategy can be used to maximize the wind power producer revenues. As the strategy could be very risky due to all these uncertainties, a CVaR constraint for the bid that maximizes the expected revenue is proposed as a way of reducing the risk. A test-case using the Spanish market rules during a 10-month period has been used to check the potential benefits of the aforementioned strategies.

From the simulations run, and under the assumed hypothesis, the following conclusions may be drawn: •Strategic bidding in the intra-day market can be used to improve even more the revenues of the wind power producer. The optimal strategy described in this paper includes deterministic intra-day price forecasting as well as probabilistic power forecasting and probabilistic imbalance prices forecasting from historical data. The strategy tends to sell more energy in the intra-day market than forecasted, improving the incomes in that market although the imbalances between contracted and actual production increase. Power imbalance decrease is not encouraged, suggesting an inadequate regulation of the imbalance prices in the case of the Spanish Market. •When applying a risk management strategy, the less severe the restriction is, the higher incomes are obtained, but an upper limit for the revenue can be established, which tallies with the optimal strategy revenue. Again, it is shown that a decrease in the imbalance costs does not imply an increase in the revenues. The risk-constrained strategy seems to benefit neither the wind power producer, nor the electric power system, because the higher losses of the optimal strategy are not avoided and power errors are greater. As the higher losses have been due to extreme unforeseen imbalance prices, further research in the modeling of their uncertainty could lead to higher benefits of the prepared risk-constrained strategy.