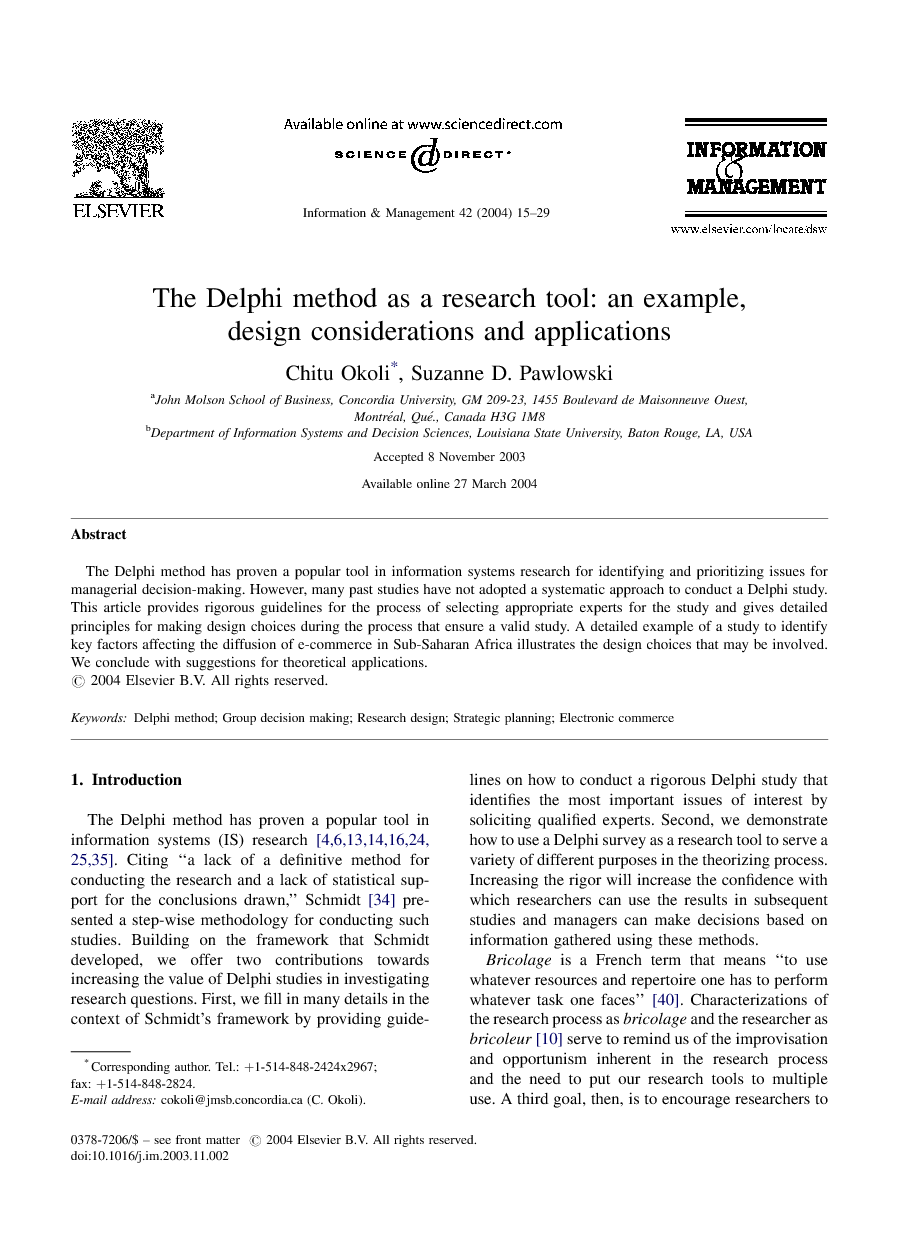 The Delphi method has proven a popular tool in information systems research for identifying and prioritizing issues for managerial decision-making. However, many past studies have not adopted a systematic approach to conduct a Delphi study. This article provides rigorous guidelines for the process of selecting appropriate experts for the study and gives detailed principles for making design choices during the process that ensure a valid study. A detailed example of a study to identify key factors affecting the diffusion of e-commerce in Sub-Saharan Africa illustrates the design choices that may be involved. We conclude with suggestions for theoretical applications.

The Delphi method has proven a popular tool in information systems (IS) research [4], [6], [13], [14], [16], [24], [25] and [35]. Citing “a lack of a definitive method for conducting the research and a lack of statistical support for the conclusions drawn,” Schmidt [34] presented a step-wise methodology for conducting such studies. Building on the framework that Schmidt developed, we offer two contributions towards increasing the value of Delphi studies in investigating research questions. First, we fill in many details in the context of Schmidt’s framework by providing guidelines on how to conduct a rigorous Delphi study that identifies the most important issues of interest by soliciting qualified experts. Second, we demonstrate how to use a Delphi survey as a research tool to serve a variety of different purposes in the theorizing process. Increasing the rigor will increase the confidence with which researchers can use the results in subsequent studies and managers can make decisions based on information gathered using these methods. Bricolage is a French term that means “to use whatever resources and repertoire one has to perform whatever task one faces” [40]. Characterizations of the research process as bricolage and the researcher as bricoleur[10] serve to remind us of the improvisation and opportunism inherent in the research process and the need to put our research tools to multiple use. A third goal, then, is to encourage researchers to incorporate the Delphi method into their research repertoire and to suggest some of the various ways they could apply the method in the theorizing process.

The Delphi method is a versatile research tool that researchers can employ at various points in their research. Use of the Delphi method for forecasting and issue identification/prioritization can be valuable in the early stages, particularly in selecting the topic and defining the research question(s). A major contribution of the MISRC/SIM studies of key managerial IS concerns, published in MIS Quarterly, [5], for example, was to provide IS researchers with an understanding of the most critical issues in IS management as seen by practicing IS executives, thus contributing to the relevance of IS research to practitioners. The ranked issues in these studies represented broad topic areas (e.g., “Building a responsive IT infrastructure”) for future research. In Delphi studies where the questions posed to experts are narrower and more specific in terms of subject, the resulting ranked lists can guide the framing of specific questions. For example, the top ranked software project risk factor identified in the study by Schmidt et al.—“Lack of top management commitment”—could stimulate the formation of specific research questions related to this particular issue. Another risk factor identified in the Schmidt et al. study, “Conflict between user departments,” points to the body of theoretical work related to situations of conflict that arise when groups seek to preserve their vested interests (e.g. [26] and [31]) as a useful lens for investigation of this issue. Table 4 summarizes some applications of the Delphi method in the research process. Researchers can use the Delphi method in a number of ways related directly to theory building. First, the ranking of a Delphi study can be of value in the initial stages of theory development—helping researchers to identify the variables of interest and generate propositions. For example, the study described in the previous section would not only identify what factors experts perceive are important for e-commerce in Africa, but which ones are viewed as more important than others. In any study, researchers must select a parsimonious list of relevant variables. The experts’ rankings prioritize the perceived effects of factors, and help the researchers to select the factors with the strongest effects. Second, additional advantages are possible up to the extent of generalizability of resulting theory. Because a Delphi study solicits information from experts who have a wide range of experience, by inquiring about their experiences and opinions researchers significantly extend the empirical observations upon which their initial theory is based—thus strengthening the grounding of the theory and increasing the likelihood that the resulting theory will hold across multiple contexts and settings. A third benefit to theory building derives from asking experts to justify their reasoning. This is an optional feature of Delphi studies; the very first Delphi study conducted by Dalkey used it. Although not many recent Delphi studies have taken advantage of this option, asking respondents to justify their responses can be valuable aid to understanding the causal relationships between factors, an understanding that is necessary to build theory. Fourth, a Delphi study can contribute to construct validity. Construct validity relies on a clear definition of the construct. Delphi study designs, such as the example study, that ask participants to validate their initial responses to make sure that that the researchers understand the meanings of the list items submitted could contribute towards this goal. In addition, the framing of construct definitions in alignment with definitions in common use by practitioners also contributes towards consistency in the understandings of the construct by participants in future studies as well as understandability by practitioners of the resulting theory. One of the contributions of the Delphi study by Holsapple and Joshi, for example, is that it provides a common language for discourse about knowledge management. Although theory-building has not been the main focus of much of the Delphi research, a carefully designed study can not only be valuable for developing theory, but it can produce relevant theoretical research. Delphi studies, then, can contribute directly and immediately to both theory and practice. They build theory by the design and rigor of the study, whereas practitioners will immediately have available to them lists of prioritized critical factors, generated by experts, which they could apply to their individual situations. The discussion in this section highlights the versatility of the Delphi method as a research tool—a tool particularly well suited to new research areas and exploratory studies. Through this discussion and detailed example of a Delphi study design, we hope to heighten awareness of the utility of the method for different purposes the theory-building process. In conclusion, we encourage researchers to consider incorporating this tool in their personal repertoire of research methods so that it is available to them to use as needed to accomplish their research objectives.