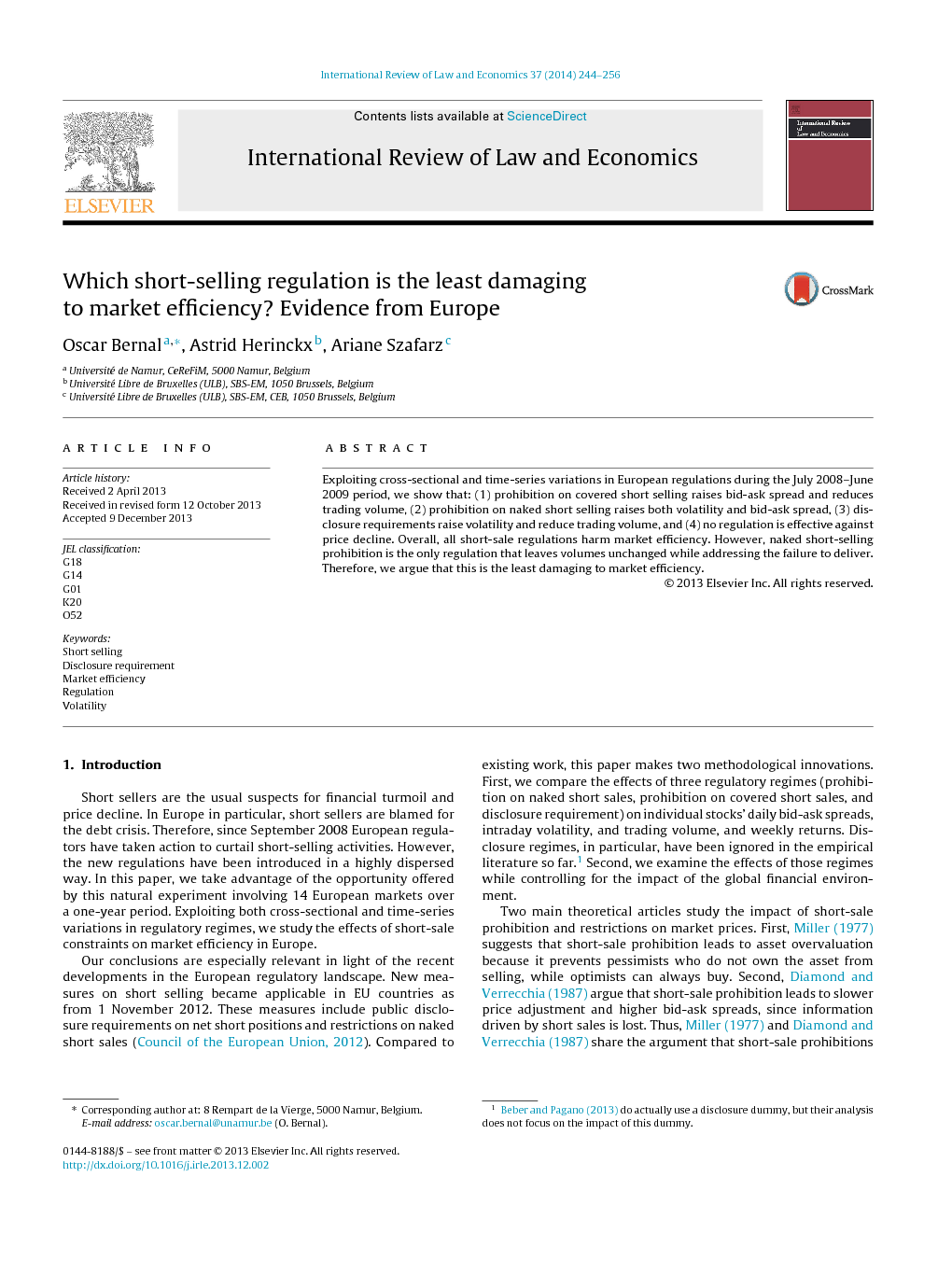 Exploiting cross-sectional and time-series variations in European regulations during the July 2008–June 2009 period, we show that: (1) prohibition on covered short selling raises bid-ask spread and reduces trading volume, (2) prohibition on naked short selling raises both volatility and bid-ask spread, (3) disclosure requirements raise volatility and reduce trading volume, and (4) no regulation is effective against price decline. Overall, all short-sale regulations harm market efficiency. However, naked short-selling prohibition is the only regulation that leaves volumes unchanged while addressing the failure to deliver. Therefore, we argue that this is the least damaging to market efficiency.

Short sellers are the usual suspects for financial turmoil and price decline. In Europe in particular, short sellers are blamed for the debt crisis. Therefore, since September 2008 European regulators have taken action to curtail short-selling activities. However, the new regulations have been introduced in a highly dispersed way. In this paper, we take advantage of the opportunity offered by this natural experiment involving 14 European markets over a one-year period. Exploiting both cross-sectional and time-series variations in regulatory regimes, we study the effects of short-sale constraints on market efficiency in Europe. Our conclusions are especially relevant in light of the recent developments in the European regulatory landscape. New measures on short selling became applicable in EU countries as from 1 November 2012. These measures include public disclosure requirements on net short positions and restrictions on naked short sales (Council of the European Union, 2012). Compared to existing work, this paper makes two methodological innovations. First, we compare the effects of three regulatory regimes (prohibition on naked short sales, prohibition on covered short sales, and disclosure requirement) on individual stocks’ daily bid-ask spreads, intraday volatility, and trading volume, and weekly returns. Disclosure regimes, in particular, have been ignored in the empirical literature so far.1 Second, we examine the effects of those regimes while controlling for the impact of the global financial environment. Two main theoretical articles study the impact of short-sale prohibition and restrictions on market prices. First, Miller (1977) suggests that short-sale prohibition leads to asset overvaluation because it prevents pessimists who do not own the asset from selling, while optimists can always buy. Second, Diamond and Verrecchia (1987) argue that short-sale prohibition leads to slower price adjustment and higher bid-ask spreads, since information driven by short sales is lost. Thus, Miller (1977) and Diamond and Verrecchia (1987) share the argument that short-sale prohibitions stifle market efficiency, either by distorting prices or by slowing down price adjustments and widening bid-ask spreads. In line with theory, international evidence supports the view that short-sale regulations create market distortions. The empirical research on this issue starts with Bris et al. (2007) who exploit the cross-sectional differences between national regulations. They find that stocks traded in countries where short sales are practiced incorporate information faster, and have lower asymmetric response to bad-versus-good news. Chen and Rhee (2010) test Diamond and Verrecchia's hypothesis on the Hong Kong market, which has a list of shortable stocks updated every three months. They confirm that the prices of shortable stocks adjust faster to new information. The regulations on short sales put in place following the outburst of the 2008 financial crisis can be broken into three categories2: (1) prohibition of covered (and also naked) short selling (PCSS), (2) prohibition of naked short selling (PNSS), and (3) regulatory disclosure for short selling (RDSS), i.e., requirement to disclose short positions to the market's regulator. Table 1 summarises the results obtained in the literature on the impacts of PCSS, PNSS, and RDSS on bid-ask spreads, stock intraday volatility, trading volume, and the level of weekly returns, respectively. Table 1 shows that the impacts of the three types of regulations have not been fully disentangled so far. Such disentanglement is precisely the aim of this paper, which concentrates on the European stock market.

This article assesses the impact on stock returns of prohibitions on short selling and disclosure requirements of short selling positions implemented in Europe since September 2008. A panel analysis of stocks from 14 European countries shows that intraday volatility decreases under no regulatory regime. Neither do the regulations counter negative stock returns. Moreover, all prohibitions on short sales are associated with wider spreads. Traded volumes decrease under the prohibition on covered short sales and disclosure regimes, but exhibit no significant changes under the prohibition on naked short selling. Theory-wise, this paper reveals that disclosure requirements increase bid-ask spreads, as predicted by Diamond and Verrecchia (1987). Overall, our results also show that all short-selling regulations introduced in Europe since 2008 have been detrimental to market efficiency, but along different dimensions. Therefore, answering the question “Which short-selling regulation is the least damaging to market efficiency?” inevitably requires an assessment of the relative importance of these dimensions. From the perspective of financial theory, fair valuation is the essence of efficient markets. It should therefore come first. Volumes are likely the second in line, because low trading activity hampers price adjustments. Higher bid-ask spreads relate to transaction costs, but do not per se distort prices, especially if volumes remain constant. Volatilities refer to price instability, which is stricto sensu not directly linked to market efficiency ( Adam and Szafarz, 1993). According to our results, PNSS is the only regulation that keeps both returns and volumes unaffected. 17 It also has the merit of reducing the risk of failure to deliver, a benefit not estimated in our study. Therefore, we argue that the moderate restriction on naked short selling is the least damaging to market efficiency.