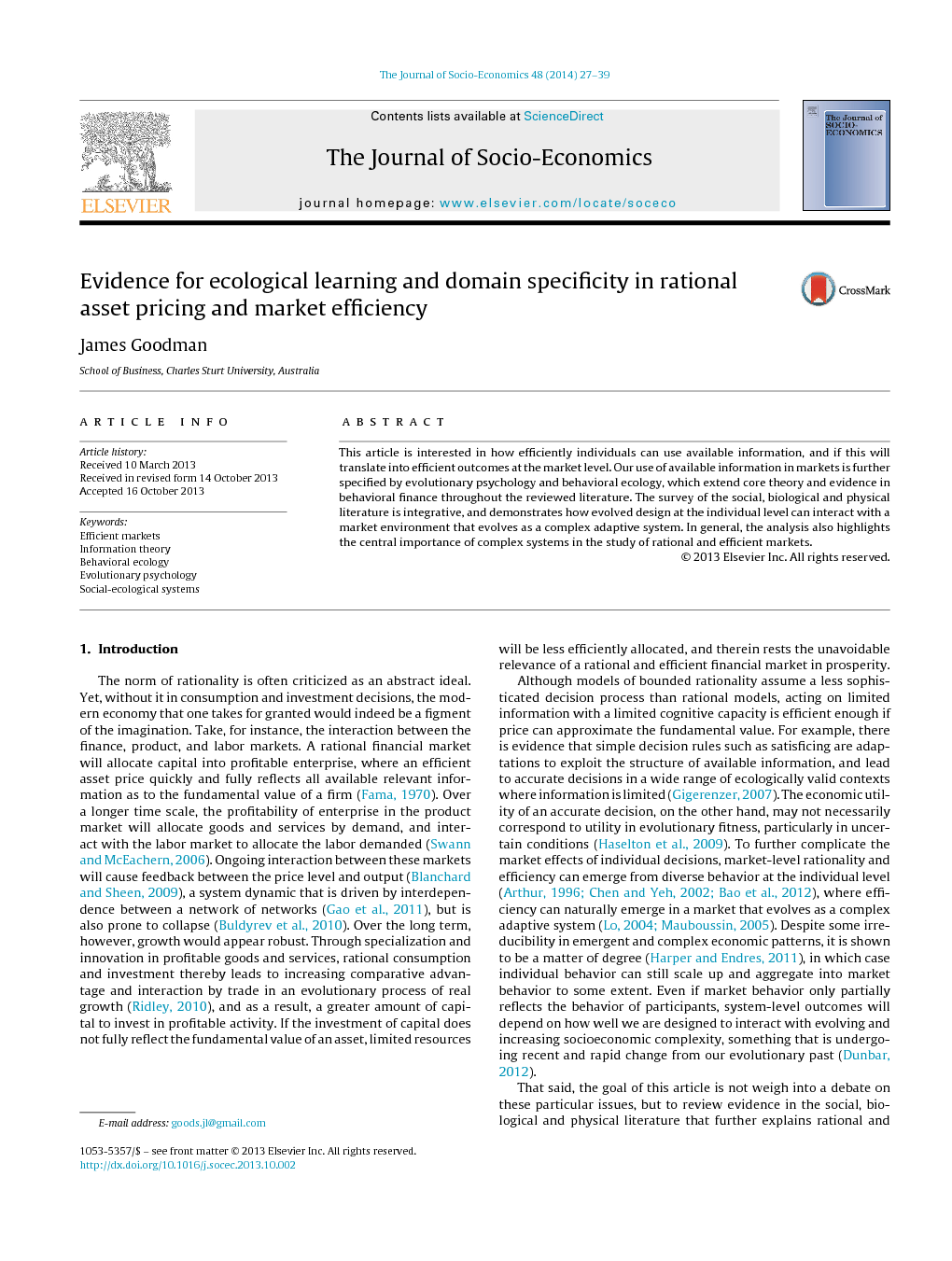 This article is interested in how efficiently individuals can use available information, and if this will translate into efficient outcomes at the market level. Our use of available information in markets is further specified by evolutionary psychology and behavioral ecology, which extend core theory and evidence in behavioral finance throughout the reviewed literature. The survey of the social, biological and physical literature is integrative, and demonstrates how evolved design at the individual level can interact with a market environment that evolves as a complex adaptive system. In general, the analysis also highlights the central importance of complex systems in the study of rational and efficient markets.

Behavioral ecology and evolutionary psychology both extend behavioral finance in the reviewed literature. However, the discussion has not attempted to reconcile the theoretical contradictions between learning strategies for dual-inheritance and domain-specific adaptation. Learning to alternate the use of complex reasoning and simple rules may be adaptive when interacting with complex systems. Personal information will likely have more ecological validity in high entropy market conditions, and social information will likely have more ecological validity in low entropy market conditions. Coding effort and ambiguity in referential systems specify the trade-off between attention and information availability. Dual-phase evolution implies that model uncertainty will increase if a market or economy is in a perturbation phase, and decrease in a growth phase. Dual-phase evolution and evolutionary games in scale-free interaction networks also lend weight to core theory in evolutionary psychology, as they describe the evolutionary-recurrent organization of status and wealth dynamics. Despite theoretical differences, behavioral ecology and evolutionary psychology lend insight into the interaction between individuals, financial markets, and economic evolution. The emergent properties of this dynamic may both impede and enhance rational and efficient market outcomes, where the main relevance of a financial market is the efficient allocation of investment capital in economic growth. Several issues warrant attention in applying evolutionary theory to behavioral finance, and invariably relate to the statistical mechanics of complex systems. First and foremost are our cognitive limits when interacting with a very large system that evolves of its own accord. Secondly, the intransparence of a complex system will make investment risk uncertain, so a representation of certain risk in an experiment may not have ecological validity, or reflect the actual outcomes of financial decisions. Most importantly, what is conspicuous throughout this discussion is the pervasiveness of core theory in behavioral finance, such as the availability heuristic, the endowment effect, and the certainty effect. While an assumption of economic irrationality in ambiguity may not necessarily be supported, evolutionary theory does extend their relevance in the finance and economics literature. As demonstrated at length, it is important to note that this does not just involve evolutionary theory alone. In any case, this article hopes to have encouraged more interdisciplinary effort and interest in the positive nature of behavioral finance, as classical theory is rife with normative prescriptions that may not necessarily reflect the actual dynamics and socioeconomic outcomes in the real world. That said, the observations made in this discussion can be readily inferred simply by comparing the surveyed literature, and a more intensive enquiry of the reviewed works should be the rational conclusion. In general, however, one observation is quite prominent, and that is the policy implications of research by Barber and Odean (2011). Even if rational and efficient pricing can naturally emerge in markets, this discussion has not ruled out the likelihood that participation by less-informed traders will aggregate in the inefficient allocation of investment capital over different time scales. In light of such concern, regulators should seriously consider an educational effort that is marketed toward retail traders, and entertain the possibility of private licensing programs to filter such participation. A number of perhaps ambitious directions for future research can therefore be suggested. At an artificial level, computer simulations may want to examine the cumulative effect of socioeconomic evolution on available information, and the demands this may place on information-processing and performance in artificial agents. The ecological validity of bias in sentiment may be empirically tested with people, by structuring less-informed and more-informed participants in experimental markets designed to simulate evolution and change in the fundamental state. In particular, it would be interesting to see the related effects on adaptive learning such as reinforcement learning and adaptive expectations (Abbink et al., 2001, Evans and Honkapohja, 2003, March, 1996 and Denrell and March, 2001), and how this can impact on variation in intuitive expertise and operative intelligence between participants. To conclude, real growth should be the primary motivation behind research in rational and efficient markets, even though complexity in comparative advantage and the availability of resources may have increasing ecological novelty with time. Resource accumulation has the effect of lowering fertility rates as an adaptive response (Hill and Reeve, 2005), and innovation in the evolutionary process of real growth leads to a more efficient output from available inputs (Ridley, 2010). Economic growth is therefore something that cuts both ways: it may be more unwieldy with time, but it can also reduce population growth and our impact on the planet. The role of financial markets is crucial in this process. As rational and efficient pricing will reflect neither an over-investment or under-investment of limited capital in profitable activity, we should be very interested in understanding how evolved design can affect rational performance in financial decisions, and impact on market outcomes.