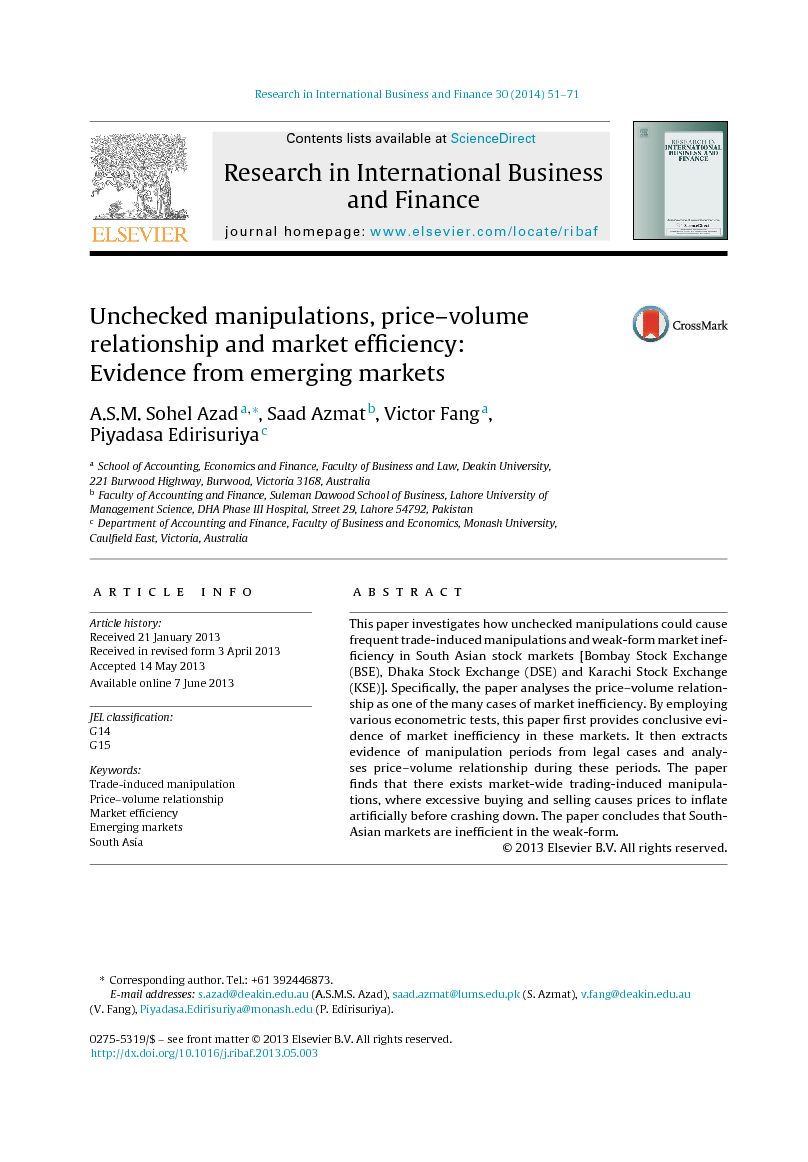 This paper investigates how unchecked manipulations could cause frequent trade-induced manipulations and weak-form market inefficiency in South Asian stock markets [Bombay Stock Exchange (BSE), Dhaka Stock Exchange (DSE) and Karachi Stock Exchange (KSE)]. Specifically, the paper analyses the price–volume relationship as one of the many cases of market inefficiency. By employing various econometric tests, this paper first provides conclusive evidence of market inefficiency in these markets. It then extracts evidence of manipulation periods from legal cases and analyses price–volume relationship during these periods. The paper finds that there exists market-wide trading-induced manipulations, where excessive buying and selling causes prices to inflate artificially before crashing down. The paper concludes that South-Asian markets are inefficient in the weak-form.

Anecdotal evidence has always existed regarding manipulative practices taking place in the South-Asian stock markets of Bangladesh, India and Pakistan. Recent studies also have found empirical evidence of such manipulations, ranging from insider information to “pump and dump” and excessive speculation in these markets (see Khwaja and Mian, 2005 and Khanna and Sunder, 1999). This paper analyses price volume relationship to investigate whether trading-induced or volume-driven manipulation exists in the South Asian stock markets. A trading-induced or volume-driven manipulation as identified by Allen and Gale (1992) is analogous to “pump and dump” of Khwaja and Mian (2005). It involves manipulators buying excessive stocks in order to artificially inflate prices, thus giving the uninformed trader the impression of higher future prices, then selling the stocks, causing the price to fall sharply. Theoretical studies, including those of Allen and Gale (1992) and Jarrow (1992) have argued that it is not possible to have profitable volume-driven manipulations in the presence of market efficiency. The presence of market manipulations therefore suggests that South-Asian markets are inefficient. To corroborate this, the first part of the paper employs empirical testing. It uses three different tests, namely the Ng–Perron unit root test (which is argued to have better power than Dickey Fuller or augmented DF unit root tests), variance-ratio tests (both traditional and rank and sign based tests), and the modified GPH (Geweke and Porter-Hudak, 1983) test proposed by Andrews and Guggenberger (2003). Since prior literature provided the results based on the unit root tests (but not the NG–Perron test) and Lo and McKinlay's variance ration tests, in this paper, we only report the results based on Wright's (2000) variance ratio test and the modified GPH test of Andrews and Guggenberger.1 This not only helps us to conserve the space but also removes a misconception that unit root tests can be used to evaluate the random walk. In effect, the unit root tests are designed only to determine whether a series is difference stationary or trend stationary. Since the errors are allowed to be an arbitrary zero-mean stationary process under both the unit root null and alternative hypothesis, the focus of the unit root test is not on the predictability of stock prices, as it is under the random walk hypothesis. Unit root tests are therefore not designed to detect predictability, but are insensitive to it by construction. If the price sequence follows a random walk, however, it must not only contain a unit root, but the increments must be unpredictable (uncorrelated). A test of the random walk is therefore concerned with predictability of the increments and not simply whether the process is a unit root. Hence, this paper does not report the unit root test results.2 Nonetheless, our results from all variants of tests provide conclusive evidence of weak-form market inefficiency in the South Asian stock markets. The second part of the paper attempts to understand the nature of price–volume relationships as a case of market inefficiency and trade-induced manipulations. To facilitate this, the study uses evidences from legal cases to identify manipulation periods. Here, it is to be noted that this study focuses on the cases where the manipulations were big enough to cause the entire price index to move.3 The paper then analyses the contemporaneous volume–price relationship during these manipulative periods, in order to show that there is a strong positive relationship between prices and volume during the “pumping” period, and a strong negative relationship between them during the “dumping” period. It is also found that the volume was significantly higher during the manipulation period than in the pre- and post-manipulation periods. These results corroborate the case evidence that manipulative bubbles were caused by excessive buying, and later burst by the selling of stocks. The paper concludes that South-Asian markets are inefficient, and hence are a breeding ground for market manipulations. The remainder of the paper is organized as follows. Section 2 provides the background and literature review. Section 3 discusses the market background and the presence of manipulative practices in South-Asian markets. Section 4 describes the data. The methodology for testing for market efficiency is analyzed in Section 5, and its empirical results are presented in Section 6. Section 7 provides the methodology and empirical evidence for volume-driven relationships during the manipulation periods. Finally, Section 8 summarizes and concludes the paper.

Market manipulation practices have been a challenge to regulators and market practitioners for many years. This paper sheds light on the manipulative practices that have recently affected the efficiency of South-Asian stock markets. Our empirical analysis which applies a battery of market efficiency tests to daily stock price and volume data from 1990 to 2010 provided conclusive evidence, quite contrary to many prior studies, that South-Asian markets are inefficient. Findings of our study not only removes the confusion that some previous studies had created by suggesting that South-Asian markets are efficient but also prove that these markets are truly inefficient. Moreover, by analyzing different manipulative periods, this study provides evidence of trading-induced manipulation. We investigated how unchecked manipulations could cause recurrent trade-induced manipulations (for example, “pump and dump”), continuity of market inefficiency and backwardness of capital market development. The paper finds a common pattern in the different manipulation episodes in South-Asian markets. The start of the manipulation period coincides with excessive stock trade which gives deceptive signal to the market by an upward price trend. In the hope of making gains from the price increase the uninformed trader enters the market and reinforces the trend. This gives the manipulator the opportunity to gradually sell her/his stocks and exit the market. When there is not enough momentum left, the manipulator crashes the market by selling excessively. This causes fear and rumours among the investors to sell and salvage from whatever they can. As a consequence, a plummeting price gives the manipulator the option to buy back her/his stocks and keep the original ownership undiluted. The whole exercise allows the informed trader having market power to make super normal profits without losing ownership of their stock portfolios. Given the small size of the South-Asian markets, these illicit practices are means to generate considerable gains by both big local and foreign market participants. This study draws the regulators’ attention to the need for appropriate reforms in order to prevent market manipulation in these markets. Such manipulations harm public confidence in capital markets and prevent their growth and development. Furthermore, the unchecked manipulations are found to encourage subsequent pumping and dumping of the markets, which discourage both domestic and foreign investments as well as encourage corruptions that could do more long-term harms to these emerging markets. These practices are extremely unethical as they result in unfair wealth redistribution from the uninformed trader to the informed manipulator. Exemplary punishments against the manipulators need to be implemented to protect small and weak players in the market. In the absence of these practices, the South-Asian markets would operate in an environment of fair exchange and experience higher efficiency.