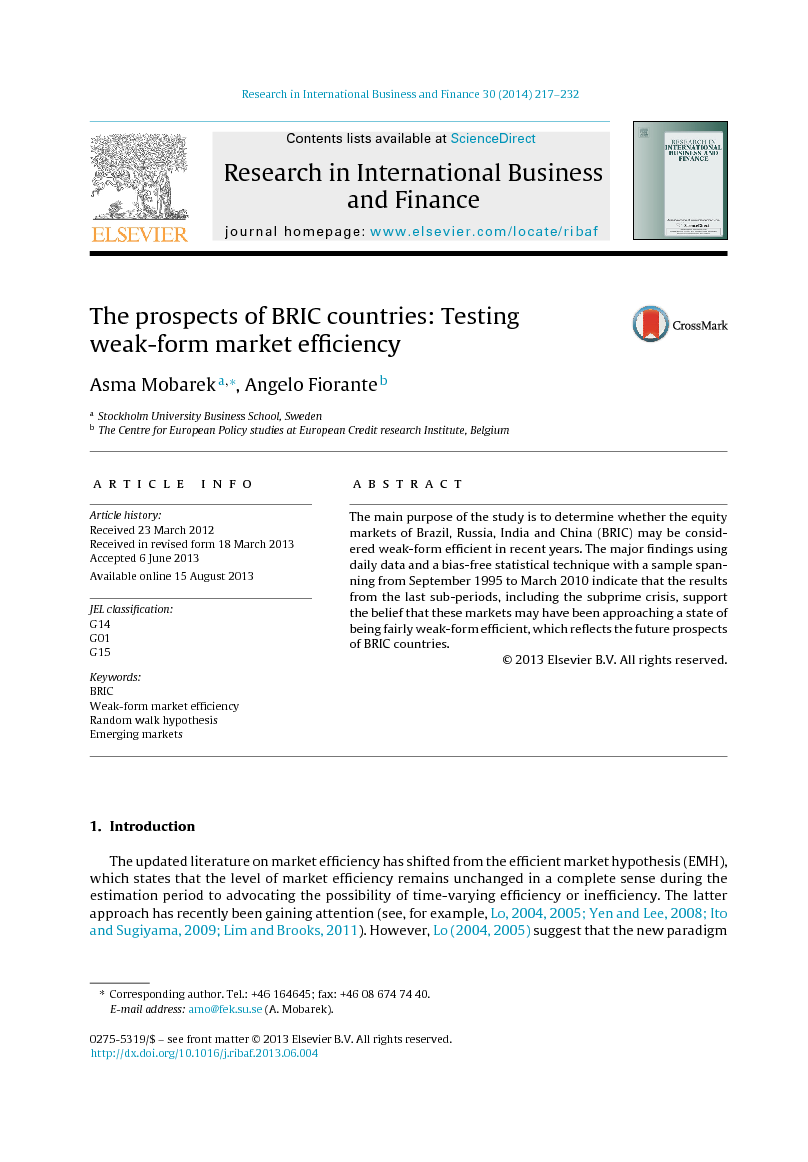 The main purpose of the study is to determine whether the equity markets of Brazil, Russia, India and China (BRIC) may be considered weak-form efficient in recent years. The major findings using daily data and a bias-free statistical technique with a sample spanning from September 1995 to March 2010 indicate that the results from the last sub-periods, including the subprime crisis, support the belief that these markets may have been approaching a state of being fairly weak-form efficient, which reflects the future prospects of BRIC countries.

The updated literature on market efficiency has shifted from the efficient market hypothesis (EMH), which states that the level of market efficiency remains unchanged in a complete sense during the estimation period to advocating the possibility of time-varying efficiency or inefficiency. The latter approach has recently been gaining attention (see, for example, Lo, 2004, Lo, 2005, Yen and Lee, 2008, Ito and Sugiyama, 2009 and Lim and Brooks, 2011). However, Lo, 2004 and Lo, 2005 suggest that the new paradigm of adaptive markets hypothesis (AMH), according to which the EMH may persist together with behavioral finance in a logically consistent way. According to this new hypothesis, market efficiency is not an unconditionally fixed phenomenon but is a characteristic that varies continuously over time and across markets (Lim and Brooks, 2011). The issues of whether the equity markets of the BRIC may be considered weak-form efficient remain still highly debatable with no general agreement, given mixed evidence. The intention of this paper is to present a more clear and homogeneous picture of these four significant markets using updated data including the recent ongoing period of turmoil in the financial world as well as a robust time-varying efficiency test methodology that facilitates statistical triangulation (Hung et al., 2009, Chianga et al., 2010, Charles and Darńe, 2009, Ito and Sugiyama, 2009 and Al-Saleh and Al-Ajmi, 2012). This paper contributes to the existing literature in two ways. First, there is no contemporaneous study on market efficiency and anomalies in the quickly growing economies and transition markets of Brazil, Russia, India and China, also known as the BRIC countries. Second, this study includes the current subprime financial crisis, which represents a developmental stage in the BRIC transition during chaos in the developed market. However, due to major changes in the BRIC economies in the past thirty years, the data have been divided into three sub-periods to observe whether these markets exhibit a trend toward increased weak-form market efficiency. The major findings reveal that the BRIC stock markets appear to exhibit a trend toward increased weak-form efficiency and the disappearance of the day of the week effect, which may lead to the realization of the BRICs’ dream in 2050 (Goldman Sachs Global Economics Group, 2007), although maintaining a well-functioning capital market is always a challenge. The rest of the paper is organized in the following way: Section 2 presents the literature review; Section 3 presents the selected data and the adopted methodology used for the study; Section 4 presents and analyses the empirical findings in detailed; and Section 5 summarizes and concludes the study.

The results provide evidence and a more comprehensive picture regarding the market efficiency of the BRIC countries. The empirical findings differ to some extent depending on the statistical tests used, with variance ratio and run test provide better results than the serial correlation, considering the bias in the data distribution. Nevertheless, the overall representation of the findings and contributions of this study emphasizes that the equity markets of the BRICs appear to be evolving in the right direction, especially during the last five to ten years. However, during the earlier sub-periods, these markets experienced significant positive autocorrelation (persistence) in returns. Another notable finding concerns how these emerging markets have been affected by the impact of the current financial crisis, which has paralyzed many developed economies and left great devastation. The last sub-period results for the BRICs clearly provide support that these markets may have been approaching a state of being fairly weak-form efficient. The important implication of this study is that it highlights the relative increase in efficiency, which is an important ingredient for these four transition markets if they wish to foster their growth and welfare. If the several long- and medium-term forecasts and predictions of these four markets are ever realized within a reasonable time frame, each of the BRICs faces significant and individual challenges to keep their development on track. Future research on the BRIC countries remains an important topic because these markets may have a significant influence on our world economy in the near future. In addition to the approach used in our study, other data types may be used, such as individual stocks or other significant indices, and different data frequencies may be relevant for testing market efficiency. Because these markets are facing many challenges and problems, which may be traced to political issues, infrastructure, market microstructures, the causes of efficiency and inefficiency, co-movement with other markets and environmental issues, there is considerable room for other types of economic or political studies that explore these factors.