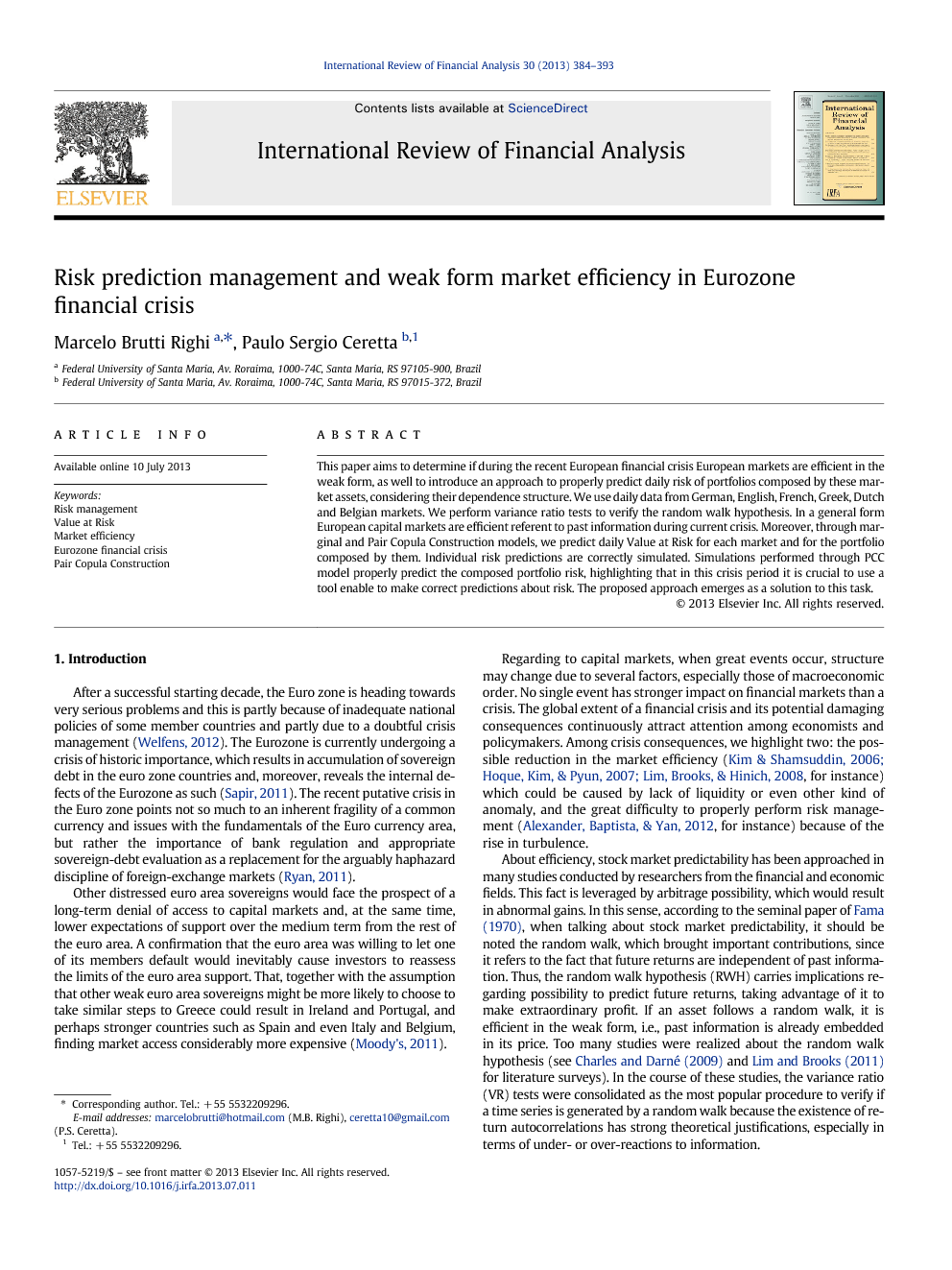 This paper aims to determine if during the recent European financial crisis European markets are efficient in the weak form, as well to introduce an approach to properly predict daily risk of portfolios composed by these market assets, considering their dependence structure. We use daily data from German, English, French, Greek, Dutch and Belgian markets. We perform variance ratio tests to verify the random walk hypothesis. In a general form European capital markets are efficient referent to past information during current crisis. Moreover, through marginal and Pair Copula Construction models, we predict daily Value at Risk for each market and for the portfolio composed by them. Individual risk predictions are correctly simulated. Simulations performed through PCC model properly predict the composed portfolio risk, highlighting that in this crisis period it is crucial to use a tool enable to make correct predictions about risk. The proposed approach emerges as a solution to this task.

For each market, we perform VR tests to verify the RWH. In a general form, European capital markets are efficient to past information during the current crisis. The no rejection of the RWH is linked with the equilibrium in the forces of supply and demand, due to the great liquidity of these markets. For operators, this result elucidates that they cannot make any profit with no risk based on past information. More specifically, prediction tools based on past information, such as technical (or graphical) analysis, have no utility, once this information is already incorporated on assets' price. Further, this result also contributes for maturity of the analyzed markets, once they are efficient on weak form during this turbulent period. Moreover, through marginal and PCC models, we predict daily one-day VaR for each market and the portfolio composed by them. Marginal ARMA–GARCH models elucidate some vestiges of the current financial crisis, as turbulence clusters at sample initial and last periods. Individual VaR predictions are correctly simulated. With marginal models filtered residuals we estimate a PCC. Results indicate a relative student's t copula predominance. BB7, BB1, Gumbel and Frank families also fit some associations. These copulas assign more importance to tails than the Gaussian one. Tail dependences are very similar to the absolute one in practically all cases. Dependences in lower and upper tails are similar in general way. Simulations performed through the PCC model properly predict the composed portfolio daily VaRs, highlighting that in this crisis period it is crucial to use a tool that enables to make correct predictions about the risk of European market assets. Hence, the proposed approach, which combines ARMA–GARCH and PCC models, emerges as a solution to this task. In a practical point of view, market operators could use PCC approach to correctly predict risk measures for its positions. With these predictions, they can properly restrict risk in portfolio construction on studied markets, considering the dependence structure. Moreover, with precise risk prediction, operators can change their positions if some volatility cluster is accused. Finally, this proper risk prediction can contribute for operators in other kind of market strategies, such as hedging, derivative leverage and short selling, since practically all movements in financial markets are associated with risk dynamics.