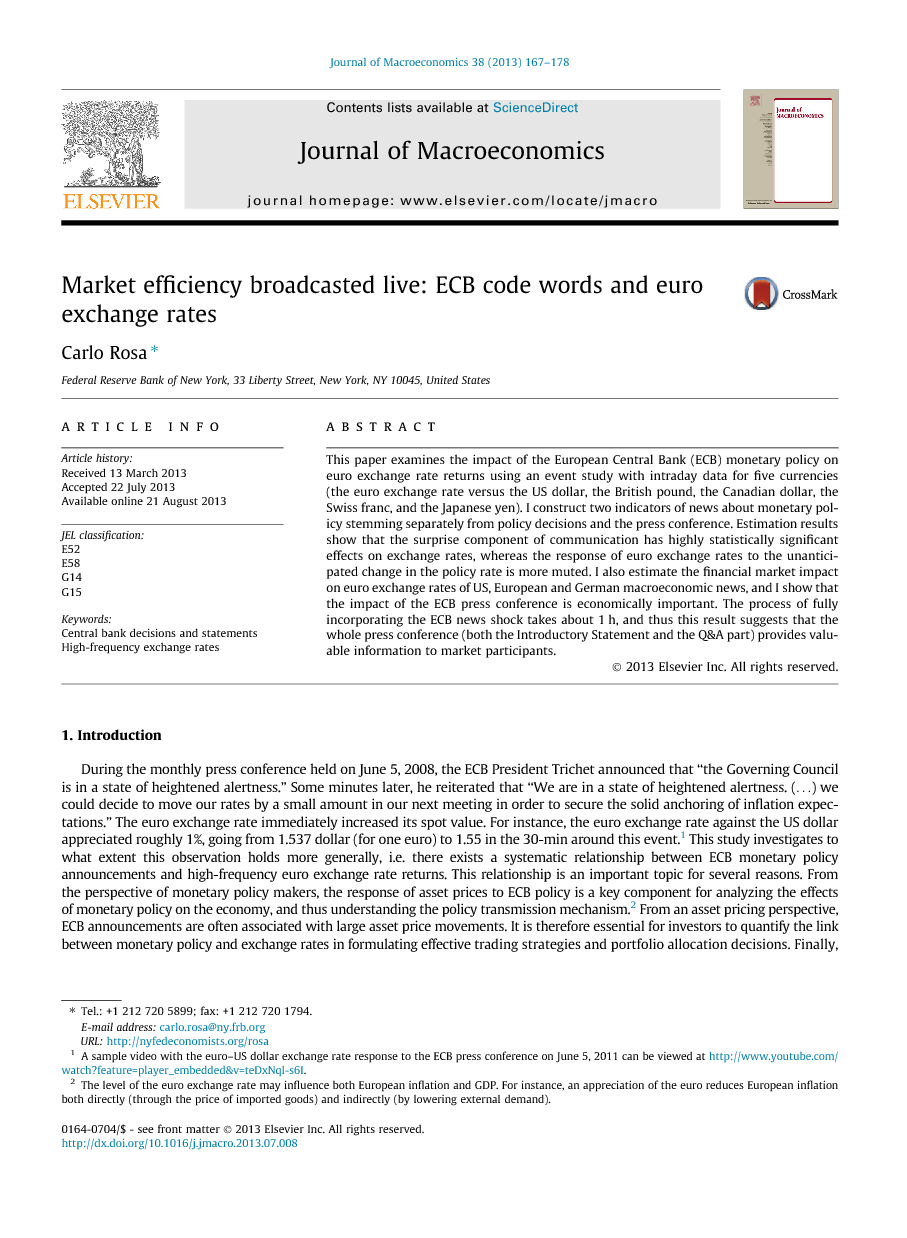 This paper examines the impact of the European Central Bank (ECB) monetary policy on euro exchange rate returns using an event study with intraday data for five currencies (the euro exchange rate versus the US dollar, the British pound, the Canadian dollar, the Swiss franc, and the Japanese yen). I construct two indicators of news about monetary policy stemming separately from policy decisions and the press conference. Estimation results show that the surprise component of communication has highly statistically significant effects on exchange rates, whereas the response of euro exchange rates to the unanticipated change in the policy rate is more muted. I also estimate the financial market impact on euro exchange rates of US, European and German macroeconomic news, and I show that the impact of the ECB press conference is economically important. The process of fully incorporating the ECB news shock takes about 1 h, and thus this result suggests that the whole press conference (both the Introductory Statement and the Q&A part) provides valuable information to market participants.

Over the last decade, central bankers around the world have accompanied the policy rate decision with a statement that provides forward-looking guidance on the future path of overnight interest rates (Woodford, 2005). This paper considers the case of the ECB, and analyses to what extent the surprise component of ECB statements (about their future monetary policy stance), as opposed to policy decisions, can drive the euro exchange rate. Estimation results show that both the unanticipated change in the policy rate and especially the surprise component of communication have highly significant effects on exchange rates. An important policy insight of this work consists in precisely quantifying the effects of ECB monetary news on euro exchange rates, and thus this paper sheds further light on the link between monetary policy and asset prices, and ultimately on the policy transmission mechanism. Several important issues are not considered in this paper and deserve further study. For instance, it would be interesting to investigate to what extent the arrival of ECB monetary news affect euro exchange rates via its impact on order flows (see Evans and Lyons, 2008, for the case of the Deutsche mark/dollar exchange rate). Another key direction for future research would be to investigate the implications of the findings of this paper for the validity of the uncovered interest rate parity condition.