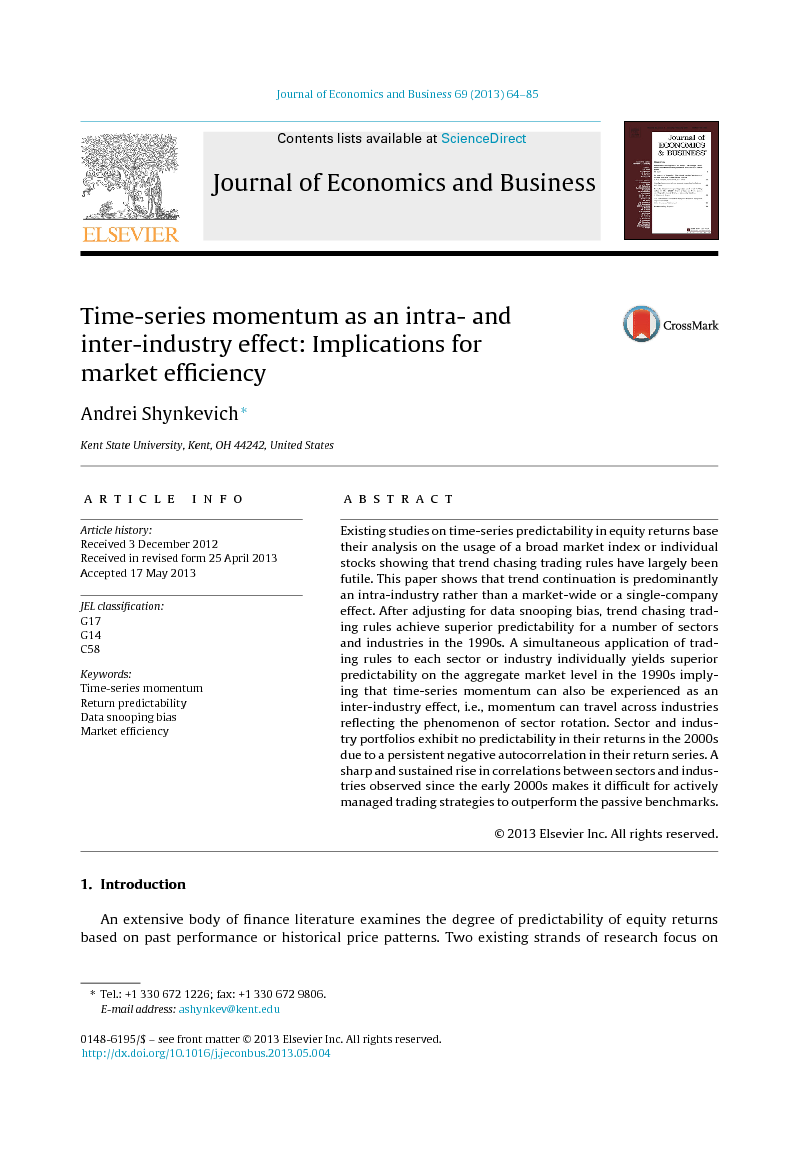 Existing studies on time-series predictability in equity returns base their analysis on the usage of a broad market index or individual stocks showing that trend chasing trading rules have largely been futile. This paper shows that trend continuation is predominantly an intra-industry rather than a market-wide or a single-company effect. After adjusting for data snooping bias, trend chasing trading rules achieve superior predictability for a number of sectors and industries in the 1990s. A simultaneous application of trading rules to each sector or industry individually yields superior predictability on the aggregate market level in the 1990s implying that time-series momentum can also be experienced as an inter-industry effect, i.e., momentum can travel across industries reflecting the phenomenon of sector rotation. Sector and industry portfolios exhibit no predictability in their returns in the 2000s due to a persistent negative autocorrelation in their return series. A sharp and sustained rise in correlations between sectors and industries observed since the early 2000s makes it difficult for actively managed trading strategies to outperform the passive benchmarks.

Previous literature finds that at conventional levels of significance there is little evidence that the application of trend chasing trading rules to the aggregate market portfolio or to individual stocks was of any value during the 1990s. Up to this point, however, the question of whether equity returns can be predictable when the market portfolio is split into related segments such as sectors or industries has not been answered. If trend continuation is an industry-specific rather than a market-wide or single-stock phenomenon, returns on sectors and industries can be predictable even when returns on the aggregate market portfolio and individual stocks are not. This paper is the first to examine the predictability of returns on sector and industry equity portfolios via the application of mechanical trading rules, providing several new implications concerning the usefulness of technical analysis. To overcome the problem of comparing multiple forecasts to a given benchmark, we employ two tests that adjust the statistical significance of the tested hypothesis of predictability in return series for a possible data snooping bias. There is evidence that technical trading rules are capable of producing superior performance for a number of sector and industry portfolios in the 1990s. The fact that trading strategies are more successful when applied to sectors and industries rather than to the aggregate market portfolio demonstrates that time-series momentum is predominantly an intra-sector and an intra-industry effect. More interestingly, in contrast to the existing literature that rejects the existence of predictive power of mechanical trading rules in the aggregate market after the mid-1980s, significant predictability of returns on the aggregate market level is found when trading rules are applied individually to each sector or industry portfolio instead of the aggregate market composed of all sectors or industries. Thus, merely rejecting the predictive power of trend chasing trading rules on the aggregate level does not necessarily rule out the existence of their superior performance when the market is split into sectors or industries. The latter finding also suggests that time-series momentum can also be an inter-sector or inter-industry effect that is a likely reflection of the phenomenon of sector rotation. The existence of time-series momentum is found to largely be a consequence of the persistent positive autocorrelation in the returns. Contrary to the evidence of positive autocorrelation in sector and industry returns during the 1990s, returns during the 2000s are characterized by negative autocorrelation. Subsequently, there is no evidence that technical trading rules consistently outperform the passive benchmark in the 2000s, after accounting for data snooping bias. Such results also imply that more recently, after the introduction of the exchange-traded funds that intend to replicate the performance of popular sector indexes, the markets have become more efficient, as the combination of inexpensive yet substantially expanded computational powers, lower transaction costs and improved liquidity must have helped to significantly reduce the short-term predictability of equity returns based on the usage of historical price patterns. The proliferation of high-frequency trading and the wide acceptance of ETFs must also have contributed to a sharp and sustained rise in correlations between sectors and industries since the early 2000s, making it difficult for actively managed trading strategies to outperform the passive buy-and-hold approach.