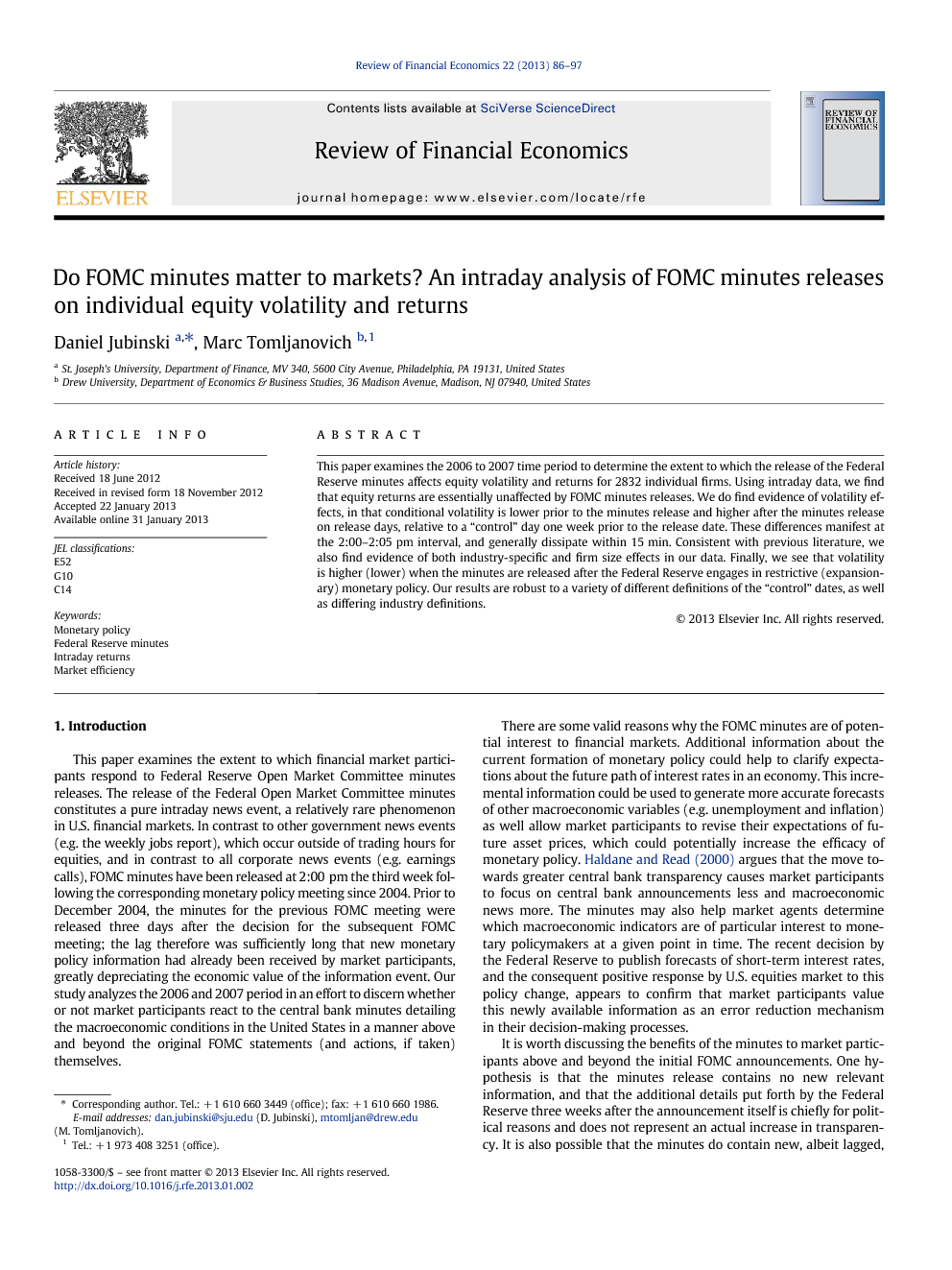 This paper examines the 2006 to 2007 time period to determine the extent to which the release of the Federal Reserve minutes affects equity volatility and returns for 2832 individual firms. Using intraday data, we find that equity returns are essentially unaffected by FOMC minutes releases. We do find evidence of volatility effects, in that conditional volatility is lower prior to the minutes release and higher after the minutes release on release days, relative to a “control” day one week prior to the release date. These differences manifest at the 2:00–2:05 pm interval, and generally dissipate within 15 min. Consistent with previous literature, we also find evidence of both industry-specific and firm size effects in our data. Finally, we see that volatility is higher (lower) when the minutes are released after the Federal Reserve engages in restrictive (expansionary) monetary policy. Our results are robust to a variety of different definitions of the “control” dates, as well as differing industry definitions.

This paper examines the extent to which financial market participants respond to Federal Reserve Open Market Committee minutes releases. The release of the Federal Open Market Committee minutes constitutes a pure intraday news event, a relatively rare phenomenon in U.S. financial markets. In contrast to other government news events (e.g. the weekly jobs report), which occur outside of trading hours for equities, and in contrast to all corporate news events (e.g. earnings calls), FOMC minutes have been released at 2:00 pm the third week following the corresponding monetary policy meeting since 2004. Prior to December 2004, the minutes for the previous FOMC meeting were released three days after the decision for the subsequent FOMC meeting; the lag therefore was sufficiently long that new monetary policy information had already been received by market participants, greatly depreciating the economic value of the information event. Our study analyzes the 2006 and 2007 period in an effort to discern whether or not market participants react to the central bank minutes detailing the macroeconomic conditions in the United States in a manner above and beyond the original FOMC statements (and actions, if taken) themselves. There are some valid reasons why the FOMC minutes are of potential interest to financial markets. Additional information about the current formation of monetary policy could help to clarify expectations about the future path of interest rates in an economy. This incremental information could be used to generate more accurate forecasts of other macroeconomic variables (e.g. unemployment and inflation) as well allow market participants to revise their expectations of future asset prices, which could potentially increase the efficacy of monetary policy. Haldane and Read (2000) argues that the move towards greater central bank transparency causes market participants to focus on central bank announcements less and macroeconomic news more. The minutes may also help market agents determine which macroeconomic indicators are of particular interest to monetary policymakers at a given point in time. The recent decision by the Federal Reserve to publish forecasts of short-term interest rates, and the consequent positive response by U.S. equities market to this policy change, appears to confirm that market participants value this newly available information as an error reduction mechanism in their decision-making processes. It is worth discussing the benefits of the minutes to market participants above and beyond the initial FOMC announcements. One hypothesis is that the minutes release contains no new relevant information, and that the additional details put forth by the Federal Reserve three weeks after the announcement itself is chiefly for political reasons and does not represent an actual increase in transparency. It is also possible that the minutes do contain new, albeit lagged, information about the discussions and data that helped bring about the FOMC decision. If this latter explanation has merit and the minutes do contain incremental information, then the FOMC minutes release has the potential to aid traders with the forecasting of future monetary policy decisions2. For example, consider one such set of news releases in early 2012. The FOMC announcement on Tuesday, January 25 was a one-page report totaling 450 words. In contrast, the subsequent minutes release on Wednesday, February 15 was a 16-page document totaling 11,202 words3. While more information does not always make for more efficient trading outcomes due to the dissemination issues involving large amounts of data, it is certainly conceivable that the minutes release does represent a non-trivial information set4. Our paper contributes to the extant literature in the following ways. First, we analyze the effects of the FOMC minutes releases, as opposed to decisions, on the returns and volatility series (absolute returns) of individual equity securities (Fig. 1). While there is a substantial body of literature devoted to examining the effect of Federal Reserve monetary policy actions on financial markets, significantly less effort has been devoted to examining the effects of FOMC minutes releases on the same markets. Also, the number of studies that have examined the interaction of the Federal Reserve and financial markets at the individual security level is practically nonexistent. Our analysis is also significantly more comprehensive than most other studies, as we analyze the returns and volatility series for over 2800 individual equities. Finally, we explicitly test whether monetary policy has heterogeneous effects across individual equities, based on firm size and industry type.

This paper examines the returns and volatility series for over 2800 individual equity securities over the 2006 and 2007 time period. Using intraday data, we find that returns are essentially unaffected by the FOMC minutes releases, while we find weak evidence of decreased volatility in the 10 minute span prior to the minutes release and pronounced increased volatility in the 15 minute span after the release time. When we stratify our data based on firm size, we find that larger firms are more responsive to the minutes release than small firms. We also find evidence of industry effects within our data; industries that are more capital intensive and consumer focused have larger percentages of firms respond to the minutes releases, relative to less capital intensive and less consumer focused industry groups. Finally, we find evidence of an asymmetric response to Federal Reserve policy decisions. Specifically, we find that volatility is substantially less for a substantial minority (approximately 30 to 40%) of our sample in the 30 minutes prior to the minutes release when rates have increased. We also see that the increase in volatility is attenuated conditional upon the Federal Reserve increasing rates relative to the unconditional specification. We leave a further investigation of the asymmetric volatility response to rate increases and decreases as well as a deeper investigation into the differential effects across industries to further research. It would also be useful to compare our results to those in the crisis and post-crisis era. Another fruitful endeavor would be to compare the magnitudes of announcement date market responses to those of minutes date market responses, as a way to determine how much relative weight traders place on each piece of monetary policy news. A third potentially insightful study involves considering the disparate impacts of FOMC minutes based on firm size or industry using a methodological approach similar to Bernanke and Kuttner (2005). This methodology would allow us to decompose returns and volatility effects based on expected dividend growth, the risk-free rate and the risk premium, but as it employs a VAR framework and different data frequency, we leave it to future research.