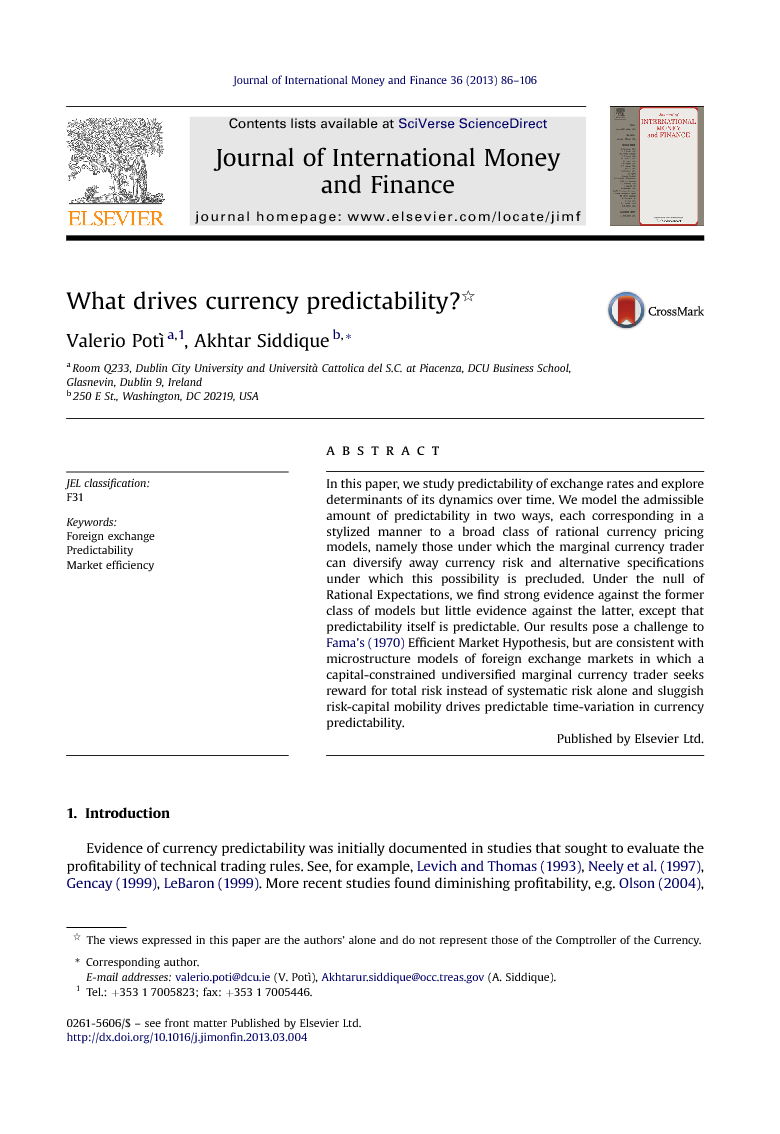 In this paper, we study predictability of exchange rates and explore determinants of its dynamics over time. We model the admissible amount of predictability in two ways, each corresponding in a stylized manner to a broad class of rational currency pricing models, namely those under which the marginal currency trader can diversify away currency risk and alternative specifications under which this possibility is precluded. Under the null of Rational Expectations, we find strong evidence against the former class of models but little evidence against the latter, except that predictability itself is predictable. Our results pose a challenge to Fama's (1970) Efficient Market Hypothesis, but are consistent with microstructure models of foreign exchange markets in which a capital-constrained undiversified marginal currency trader seeks reward for total risk instead of systematic risk alone and sluggish risk-capital mobility drives predictable time-variation in currency predictability.

Evidence of currency predictability was initially documented in studies that sought to evaluate the profitability of technical trading rules. See, for example, Levich and Thomas (1993), Neely et al. (1997), Gencay (1999), LeBaron (1999). More recent studies found diminishing profitability, e.g. Olson (2004), Pukthuanthong-Le et al. (2006) and Neely et al. (2009), though the latter authors also found that newer and relatively more sophisticated rules were still profitable. Recent studies have also shown that rules that exploited the “forward premium puzzle”, most notably the carry trade, generated for over a decade returns that were large and relatively uncorrelated with known risk factors. See, among others, Burnside et al. (2007), Brunnermeir et al. (2008), Jylha et al. (2008) and Jylha and Suominen (2011). Overall, these studies suggest the presence of predictability, possibly itself of a predictably time-varying nature, in foreign exchange markets. Direct or indirect attempts to explain such predictability include the work of Brennan and Xia (2006), Burnside et al. (2007), Lustig et al. (2008), Hochradl and Wagner (2009), Neely et al. (2009), Jylha and Suominen (2011). Such attempts, however, have either focused on the predictability exploited by specific trading rules, most prominently the carry trade except in the paper of Neely et al. (2009) who consider momentum and filter rules, or they have not emphasized the possibly time-varying nature of predictability, with the notable exceptions of Neely et al. (2009) and Jylha and Suominen (2011). Our paper draws insight from this literature and especially from the paper of Jylha and Suominen (2011), to offer a comprehensive assessment of the evolution through time of currency predictability and, more importantly, explore its determinants. That is, a key concern in our study is predictability of predictability and what drives it. We rely on the recent literature on limits to speculation, especially Jylha and Suominen (2011), Adrian and Shin (2010) and Garleanu and Pedersen (2011), and capital mobility, i.e. Duffie (2010) and Duffie and Strulovici (2011). On one hand, we find that the level of estimated currency predictability can be largely explained as the by-product of plausible temporal variation of expected returns demanded by a marginal currency trader who seeks reward for total risk, whereas it is difficult to account for it if we posit that it is systematic risk only that matters. Because of the close link between predictability and excess-volatility, this is in contrast with classical formulations of Fama's (1970) Efficient Market Hypothesis (EMH) but is consistent with rational expectations, and hence rational currency pricing, in the presence of “limits to speculation” as in models à la Lyons' (2001) and “speculative efficiency” à la Wagner (2009). On the other hand, we find that predictability varies over time in a manner that depends on the availability of risk capital. This predictability of predictability cannot be easily reconciled with these models unless we posit limited risk-capital mobility as in Duffie (2010) and Duffie and Strulovici (2011) or some other mechanism that may result in time-varying “limits to speculation”. The rest of the paper is structured as follows. In the next section, we characterize rational currency pricing and predictability under two stylized models corresponding to two broad classes of rational asset pricing models, which essentially differ with respect to whether the marginal currency trader can hold a diversified market portfolio or otherwise. In Section 3, we describe our dataset. In Section 4, we provide an empirical characterization of currency predictability by checking whether it can be rationalized in a model that allows for diversification of the marginal currency trader or otherwise. In Sections 5, 6 and 7, we study the evolution of predictability over time and the drivers of its variation, showing that short-term deviations from the level that can be rationalized by postulating an undiversified marginal currency trader are themselves predicted by the availability of risk capital. In the final Section, we summarize our main findings and offer conclusions.

In this paper, we assess the statistical and economic significance of predictability in currency returns over the period 1971–2010. Our findings imply violation of the RE/EMH under a broad class of asset rational pricing models, represented in a stylized manner by the DMTM. The case against the RE/EMH rests, however, on relatively large alphas but not on unduly large SRs. Taken together, these findings pose a challenge to the EMH but they are compatible “limits to speculation” models in which a capital-constrained marginal trader, as in the UMTM, holds undiversified portfolios of currency strategies. This circumstance implies the emergence of the Sharpe ratio as the relevant risk-reward measure. Excess-predictability, however, is time-varying and predicted by risk-capital availability, consistently with recent theories on limited mobility of risk capital put forth by Duffie (2010) and Duffie and Strulovici (2011). A concurrent effect might be learning, as in Lo's (2004) Adaptive Market Hypothesis (AMH), possibly coupled with un-modeled microstructure effects or outright investors' error. Attempts to discriminate between these possibilities would be a valuable extension of this work. This would require a more detailed structural model of exchange rate determination, characterized, at a minimum, by the presence of capital-constrained marginal traders and a plausible learning scheme.