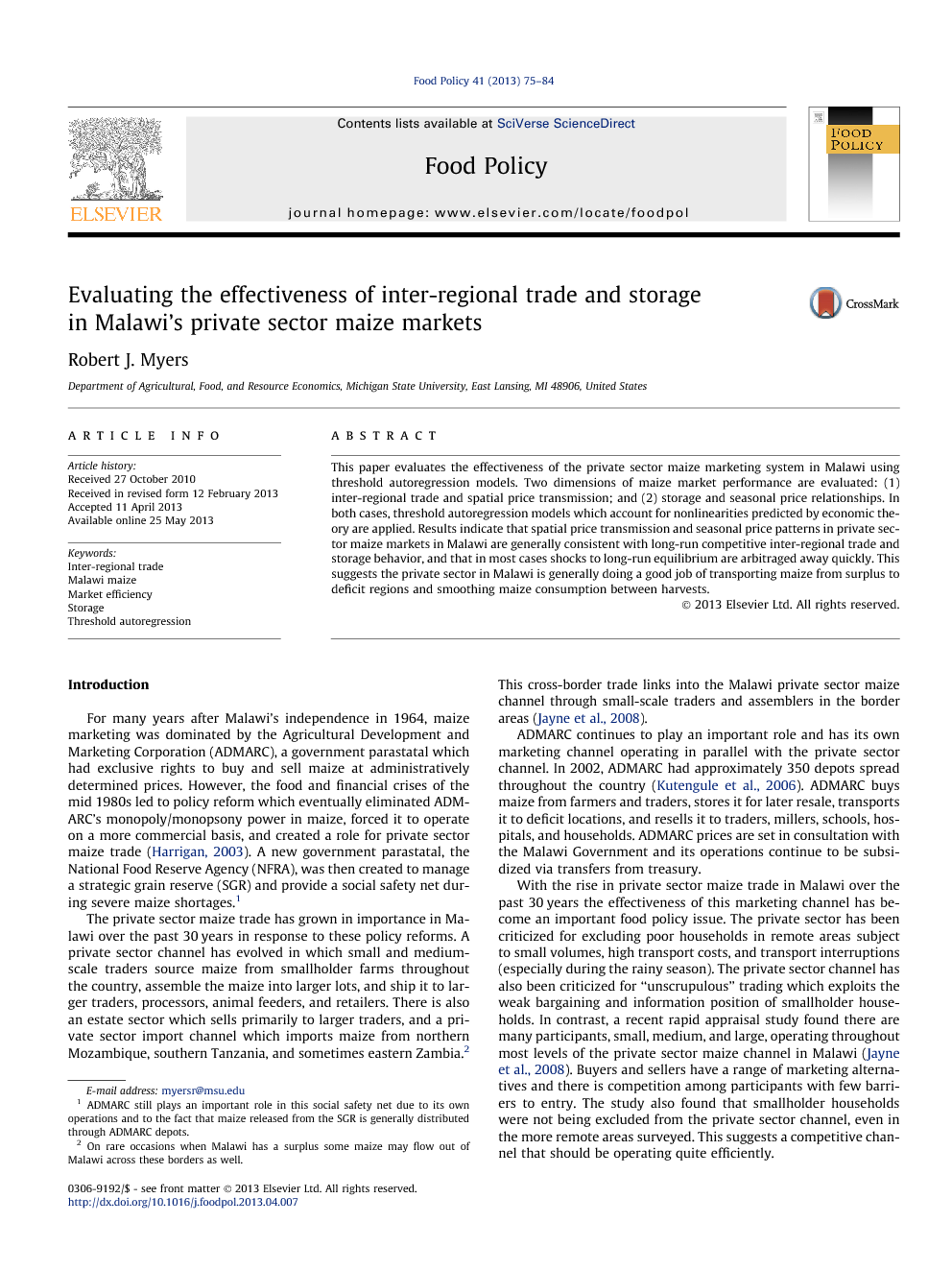 This paper evaluates the effectiveness of the private sector maize marketing system in Malawi using threshold autoregression models. Two dimensions of maize market performance are evaluated: (1) inter-regional trade and spatial price transmission; and (2) storage and seasonal price relationships. In both cases, threshold autoregression models which account for nonlinearities predicted by economic theory are applied. Results indicate that spatial price transmission and seasonal price patterns in private sector maize markets in Malawi are generally consistent with long-run competitive inter-regional trade and storage behavior, and that in most cases shocks to long-run equilibrium are arbitraged away quickly. This suggests the private sector in Malawi is generally doing a good job of transporting maize from surplus to deficit regions and smoothing maize consumption between harvests.

This study uses TAR analysis to investigate whether spatial and temporal price patterns observed in Malawi retail maize markets are consistent with conditions required for effective inter-regional trade and storage. Spatial efficiency conditions were found to hold in the long run for all trade routes investigated, and short-run deviations from these conditions dissipate quickly (half-life of 0.6–2.2 weeks). These adjustment speeds compare favorably to maize and rice markets in other parts of Africa, and even to maize markets in the US. So the overall conclusion is that private sector maize markets in Malawi have worked quite well in allocating maize across space. Storage efficiency conditions were found to hold in the long run in 8 out of 10 markets, and in those eight markets short-run deviations from these conditions dissipate quickly (half-life of 0.5–2.9 weeks). For the remaining two markets (Mzuzu and Nchalo) estimation result suggest oscillatory explosive behavior, which is inconsistent with the existence of long-run storage equilibrium in these markets. There is no obvious distinguishing common characteristic of these two markets which would explain this result. In particular, no evidence was found that more central and urban markets perform differently than more remote and rural markets. The TAR results reported here are generally consistent with the related Jayne et al. (2008) analysis which used a rapid appraisal survey to evaluate the structure, conduct, and performance of the maize marketing system in Malawi. Their surveys found there are many participants in the supply chain operating in a competitive environment with few barriers to entry. Under these conditions we would expect spatial and temporal price patterns to reflect characteristic conditions required for spatial trade and storage efficiency, which with a few exceptions they seem to do. Results also suggest maize stockouts may occur in Malawi, even given well-functioning and efficient private sector storage, in response to unusually poor harvests. A social safety net for dealing with these problems might have two main dimensions—a SGR making additional public stocks available when a private sector stockout occurs during times of severe shortage; and/or contingent contracts for imports that can be exercised when prices rise to a specified trigger level. The advantage of having contingent import contracts in place (along with transparent rules for drawing down and replenishing the SGR) is that this should make the maize marketing policy environment more predictable for private sector participants, thereby encouraging additional participation and development. Both the SGR and contingent import contracts would require treasury or donor support, especially if imports are released domestically at subsidized prices.