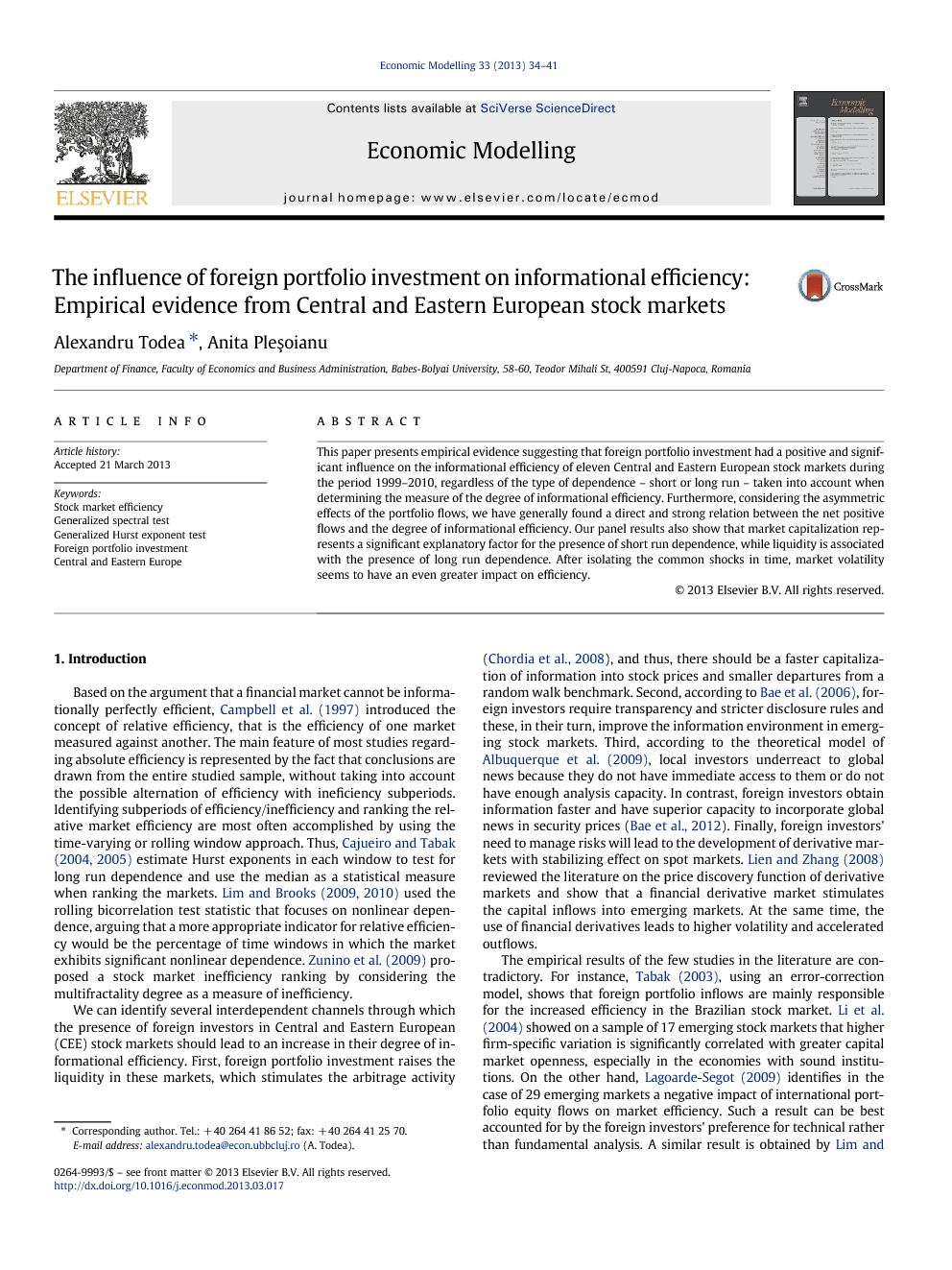 This paper presents empirical evidence suggesting that foreign portfolio investment had a positive and significant influence on the informational efficiency of eleven Central and Eastern European stock markets during the period 1999–2010, regardless of the type of dependence – short or long run – taken into account when determining the measure of the degree of informational efficiency. Furthermore, considering the asymmetric effects of the portfolio flows, we have generally found a direct and strong relation between the net positive flows and the degree of informational efficiency. Our panel results also show that market capitalization represents a significant explanatory factor for the presence of short run dependence, while liquidity is associated with the presence of long run dependence. After isolating the common shocks in time, market volatility seems to have an even greater impact on efficiency.

Based on the argument that a financial market cannot be informationally perfectly efficient, Campbell et al. (1997) introduced the concept of relative efficiency, that is the efficiency of one market measured against another. The main feature of most studies regarding absolute efficiency is represented by the fact that conclusions are drawn from the entire studied sample, without taking into account the possible alternation of efficiency with ineficiency subperiods. Identifying subperiods of efficiency/inefficiency and ranking the relative market efficiency are most often accomplished by using the time-varying or rolling window approach. Thus, Cajueiro and Tabak, 2004 and Cajueiro and Tabak, 2005 estimate Hurst exponents in each window to test for long run dependence and use the median as a statistical measure when ranking the markets. Lim and Brooks, 2009 and Lim and Brooks, 2010 used the rolling bicorrelation test statistic that focuses on nonlinear dependence, arguing that a more appropriate indicator for relative efficiency would be the percentage of time windows in which the market exhibits significant nonlinear dependence. Zunino et al. (2009) proposed a stock market inefficiency ranking by considering the multifractality degree as a measure of inefficiency. We can identify several interdependent channels through which the presence of foreign investors in Central and Eastern European (CEE) stock markets should lead to an increase in their degree of informational efficiency. First, foreign portfolio investment raises the liquidity in these markets, which stimulates the arbitrage activity (Chordia et al., 2008), and thus, there should be a faster capitalization of information into stock prices and smaller departures from a random walk benchmark. Second, according to Bae et al. (2006), foreign investors require transparency and stricter disclosure rules and these, in their turn, improve the information environment in emerging stock markets. Third, according to the theoretical model of Albuquerque et al. (2009), local investors underreact to global news because they do not have immediate access to them or do not have enough analysis capacity. In contrast, foreign investors obtain information faster and have superior capacity to incorporate global news in security prices (Bae et al., 2012). Finally, foreign investors' need to manage risks will lead to the development of derivative markets with stabilizing effect on spot markets. Lien and Zhang (2008) reviewed the literature on the price discovery function of derivative markets and show that a financial derivative market stimulates the capital inflows into emerging markets. At the same time, the use of financial derivatives leads to higher volatility and accelerated outflows. The empirical results of the few studies in the literature are contradictory. For instance, Tabak (2003), using an error-correction model, shows that foreign portfolio inflows are mainly responsible for the increased efficiency in the Brazilian stock market. Li et al. (2004) showed on a sample of 17 emerging stock markets that higher firm-specific variation is significantly correlated with greater capital market openness, especially in the economies with sound institutions. On the other hand, Lagoarde-Segot (2009) identifies in the case of 29 emerging markets a negative impact of international portfolio equity flows on market efficiency. Such a result can be best accounted for by the foreign investors' preference for technical rather than fundamental analysis. A similar result is obtained by Lim and Kim (2011) in a study of 23 emerging markets. A possible explanation is that on emerging markets positive autocorrelations of returns are generated by foreign invetors engaged in positive feedback trading strategies, according to the theoretical model developed by De Long et al. (1990). Bariviera (2011) fails to identify a significant relation between the presence of foreign investors and efficiency in the case of the Thai stock market. Recently, Bae et al. (2012) have shown on a sample of 4840 stocks in 21 countries that greater investibility reduces price delay to global market information leading to an increase of the degree of efficiency. The objective of this paper is to empirically investigate the relation between stock market efficiency and foreign portfolio investment in CEE. From the beginning, we must underline that a sensitive issue is how the informational efficiency of a stock market is measured. According to Lim and Kim (2011), in most studies, the deviation from random walk is perceived as a deviation from efficiency, deviation due to the presence of short and/or long run dependence. Unlike the vast majority of studies that focus on one type of dependence only, this paper brings a first important contribution by investigating both types of dependences through the Generalized Spectral (GS) test and the Generalized Hurst Exponent (GHE) test. Our second contribution consists in studying the relation between stock market efficiency and foreign portfolio investment by using different panel regressions in which we include a set of control variables that captures the features of the investigated markets and in which we allow for the effects of asymmetric portfolio flows. Finally, given the contradictory results in literature, this paper highlights the findings regarding the relation between efficiency and foreign portfolio investment in the case of CEE stock markets. The paper is organized as follows: Section 2 describes the two tests used to measure the efficiency. Section 3 presents the data and the methodology. Section 4 reports the empirical results. The final section summarizes the conclusions.

There are only a few studies in the literature that have investigated the relation between stock market efficiency and foreign portfolio investment and, even more, their results are contradictory. This paper presents cross-country evidence using data for eleven Central Eastern European stock markets over the period 1999–2010. Our panel regression results, supported by a series of robustness tests, show a direct and significant relation between foreign portfolio investment and efficiency, regardless of considering short or long run dependence. The quantification of foreign portfolio investment through de facto measures, namely net equity inflows, and cross-border portfolio investment holdings leads us to conclude that the involvement of foreign investors in these markets is a positive factor of the degree of efficiency. The fact that de jure stock market openness measures are not significant factors of efficiency shows that taking measures to open these markets to portfolio flows is not enough. In addition, as expected, market capitalization and turnover ratio are two other determinants of efficiency in these markets. At the same time, market volatility is a significant influence factor especially when the common effects in time on efficiency are isolated. Further investigation will have to identify other explanatory factors of deviation from efficiency in CEE stock markets, maybe such as economic freedom, protection of investors or transaction costs. The results of such studies are useful for the regulatory authorities of CEE stock markets and also for foreign investors who diversify their portfolios internationally.