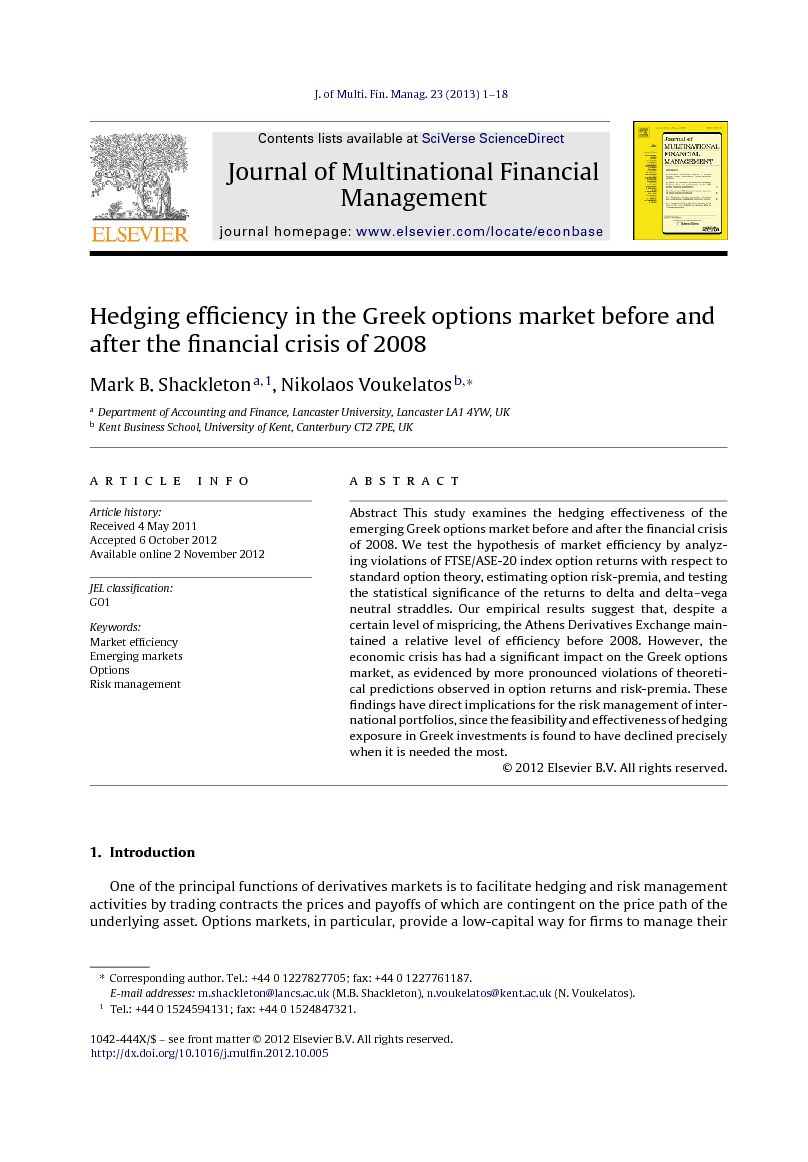 This study examines the hedging effectiveness of the emerging Greek options market before and after the financial crisis of 2008. We test the hypothesis of market efficiency by analyzing violations of FTSE/ASE-20 index option returns with respect to standard option theory, estimating option risk-premia, and testing the statistical significance of the returns to delta and delta–vega neutral straddles. Our empirical results suggest that, despite a certain level of mispricing, the Athens Derivatives Exchange maintained a relative level of efficiency before 2008. However, the economic crisis has had a significant impact on the Greek options market, as evidenced by more pronounced violations of theoretical predictions observed in option returns and risk-premia. These findings have direct implications for the risk management of international portfolios, since the feasibility and effectiveness of hedging exposure in Greek investments is found to have declined precisely when it is needed the most.

The market efficiency hypothesis [1] and [2] states that asset prices adjust to fully reflect all available information and so show martingale behaviour. Although the formulation of this hypothesis refers to a rapid and unbiased price adjustment process, in practice, prices tend not to adjust to new information instantly but after a certain amount of time. During this time investors take actions to exploit temporary profit opportunities arising from new information, ultimately pushing prices towards efficiency. The time the market takes to adjust prices to market efficiency is an important dimension of the market efficiency hypothesis [3], with notable practical implications for trading and risk management. The adjustment of asset prices to information has been widely studied at the theoretical and empirical level. Theoretical models have been developed by Grossman [4], Grossman and Stiglitz [5] and Cornell and Roll [6], in which the incorporation of stock price information depends on the cost of information production. For a rational expectation framework, Brown and Jennings [7] and Grundy and McNichols [8] show how prices adjust in a sequence of trades to fully reveal all relevant information. For a model populated by Bayesian traders, Chakrabarti and Roll [9] found, in a simulation study, that the market usually converged more rapidly to an equilibrium price when arbitrageurs reacted to one another. Behavioural finance models have been developed by Barberis et al. [10], Daniel et al. [11] and Hong and Lee [12] to provide explanations for empirically documented under- and over-reactions of stock prices to news. Empirically, several studies have examined market efficiency in terms of the speed with which prices react to new information arising from any specific event e.g., [13] or in a more general setting with no specific event identified e.g., [14]. Early tests of weak-form market efficiency employed the linear autocorrelation test and the Lo and Mackinlay variance ratio test [15] for daily, weekly and monthly stock returns. However, those tests assume linearity e.g., [16], [17] and [12], so they only check for serial uncorrelatedness rather than for the martingale property of asset returns. There is no reason to suppose that stock prices are intrinsically linear. Human error in reasoning or information processing (e.g., information bias or overconfidence) may explain information imperfections in financial markets [18] that may give rise to price nonlinearity. Nonlinearity may also arise from price fads, rational speculative bubbles [17] or the assumption that prices are the result of complex interactions between informed and uninformed traders in the market place. Nonlinearity in stock returns is crucial for forecasting see, e.g., [19] and [20] and for determining the speed of convergence to market efficiency since zero autocorrelation does not imply the martingale property of asset returns. Statistical tests developed by Hurst [21], Brock et al. [22] and Peng et al. [23] are considered superior to the linear autocorrelation tests as they are able to detect the presence of short- and long-term dependence. Based on those tests, we propose a different approach to the problem of measuring the adjustment time of security prices towards weak-form market efficiency. This approach is based on employing detrended fluctuation analysis (DFA) [23] for different intraday time scales in order to identify the time horizon necessary for prices to adjust to a fractional Brownian motion (fBm) with a Hurst exponent of 0.5. The chief advantages of the DFA methodology compared with traditional methods (e.g., Hurst analysis, rescaled range statistic, root mean square, time-varying long-range dependence) are that (a) it allows self-similarity to be detected in nonstationary time series and so allows, in turn, log price to be analysed, and (b) it avoids the spurious detection of apparent long-range correlation by excluding the intrinsic trend of the financial time series. DFA has been used for dynamic analysis, among others, of heart rate variability [24], human electroencephalographic fluctuations [25] and economic and financial series [26], [27], [28], [29], [30], [31] and [32]. In particular, DFA has been recently employed to study market efficiency [33], [34], [35], [36] and [37], even though all the existing empirical studies using DFA have analysed the efficiency at specific time scales without analysing the time the market takes to achieve weak-form efficiency. This is the focus of our study. The remainder of the article is organized as follows. Section 2 provides a brief theoretical review and describes the DFA methodology for estimating the Hurst parameter to quantify the speed of adjustment of prices to a random walk; Section 3 describes our data; Section 4 reports our empirical results; and, finally, Section 5 concludes the article.