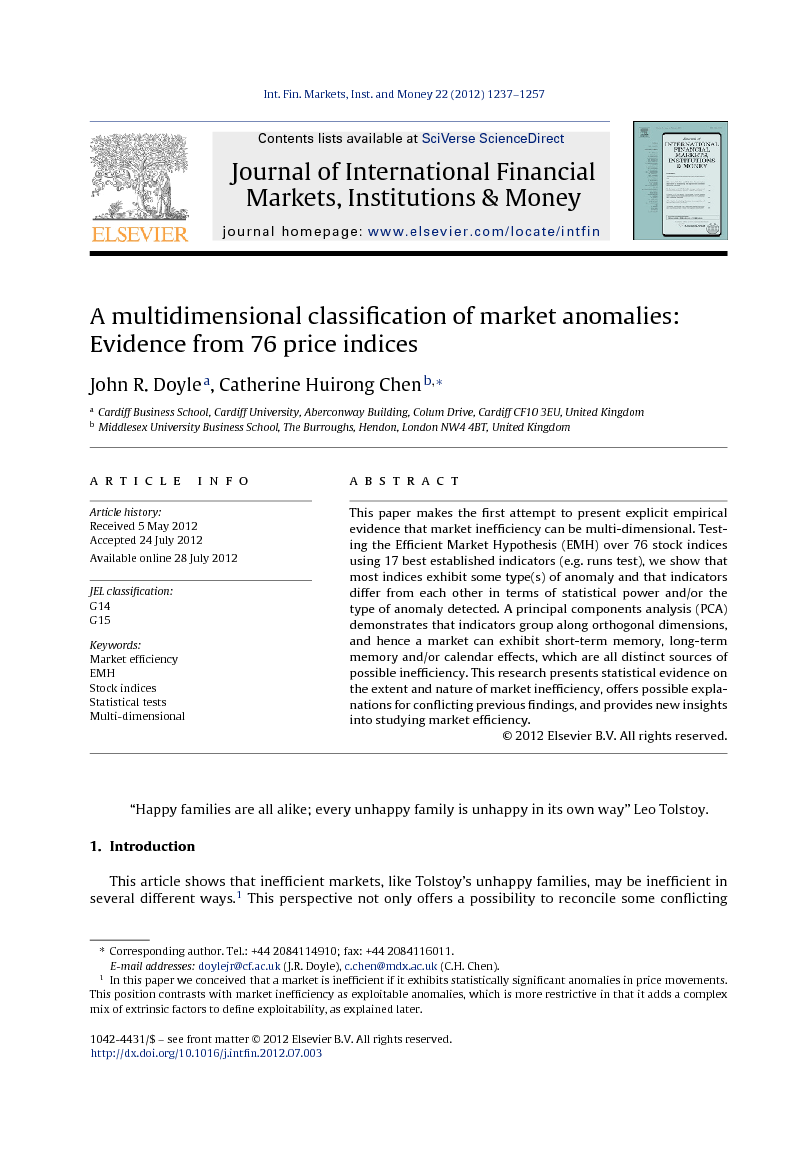 This paper makes the first attempt to present explicit empirical evidence that market inefficiency can be multi-dimensional. Testing the Efficient Market Hypothesis (EMH) over 76 stock indices using 17 best established indicators (e.g. runs test), we show that most indices exhibit some type(s) of anomaly and that indicators differ from each other in terms of statistical power and/or the type of anomaly detected. A principal components analysis (PCA) demonstrates that indicators group along orthogonal dimensions, and hence a market can exhibit short-term memory, long-term memory and/or calendar effects, which are all distinct sources of possible inefficiency. This research presents statistical evidence on the extent and nature of market inefficiency, offers possible explanations for conflicting previous findings, and provides new insights into studying market efficiency.

The first step of this paper was to explore whether markets were efficient or not, roughly defined as whether nor or not they exhibit statistical anomalies. Our results show that generally, most of the markets are statistically inefficient, exhibiting one type or the other of anomalies. However, we have to point out that our results should be cautiously interpreted. Finding statistical anomalies or regularities does not immediately reject EMH. Richard Roll, among others, points out that a market is only inefficient when investors can properly exploit it in a systematic way (Malkiel, 2000). To address this, transaction costs and other factors need to be taken into consideration, which is too ambitious and is beyond the scope of this paper.13 We leave this for future studies, which might be possible if narrowing down the indicators and markets. However, even with this limitation, investors or researchers can use our findings as a starting point to explore opportunities. For example, some markets are more efficient than the others. Investors can start with those markets that show strongly significant statistical anomalies and examine whether a certain market is exploitable or not with their knowledge of current transaction costs, etc. Also, the paper makes clear that inefficiency is as much in the index as in the market – the FTSE100, for instance, being among the most efficiently traded indices, but the FTSE SmallCap being amongst the least efficiently traded. The finding has important implications for market participants and policy makers, such as in building investment portfolios and setting market regulations across the markets. The more innovative and valuable findings of the paper relate to our second and third objectives. The second objective was to benchmark indicators. We have found a remarkable disparity in the power of different indicators to detect anomalies among even the same market. Therefore, whether a market is observed to be inefficient depends to a large extent on the indicator used. The third objective was to explore whether market inefficiency is a multi-dimensional concept. We found that various anomalies load on several dimensions; i.e. market inefficiency, if a market is inefficient, can be multi-dimensional. Therefore, whether a market is observed to be inefficient depends on whether it is inefficient along a particular dimension, and whether the indicator is tuned to detect inefficiency along that dimension. Thus, to better understand market efficiency, both conditions need to be present. This paper provides a more sophisticated understanding of market inefficiency and the indicators. It offers possible explanations for why researchers often come to opposite conclusions, even when examining the same data. For instance, Lean and Smyth (2007) used tests that are not only likely to be less statistically powerful than those used by Worthington and Higgs (2006), as argued in Section 4.3; but also tap into different kinds of anomalies. Moreover, this paper provides important insights for future research. Methodologically, the paper shows that samples and indicators are important when testing for EMH. Theoretically, the paper suggests a multi-dimensional view of market inefficiency. The existence of multiple dimensions suggests that, while markets are to some degree globally integrated, there is plenty of local variety in need of explanation. Future studies that investigate the origins of the different inefficiencies should eventually help build up a more complete picture of how markets operate, the nature of inefficiency, where and when it emerges, and what causes it to disappear or evolve. Hints have been provided in the literature to look at different trading behaviours, e.g. individual vs. institutional investors, or foreign vs. domestic traders (Venezia and Shapira, 2007, Barber et al., 2008 and Chen et al., 2009). Being the first empirical study explicitly devoted to multi-dimensionality, we have focused only on the best-established indicators and methods of synthesis that are applicable using index-level data. But every new indicator has the potential to reveal a new dimension, or to re-evaluate the importance of an old one. Future research could extend the coverage of data, methods of synthesis, and indicators. Prima facie, those most likely to unearth novel inefficiencies are ones that exploit aspects of the price index process we have not explored, for instance the contingency of volatility or extreme daily returns ( Bali et al., 2008); or that use external, non-index data, such as weather at the stock exchange ( Hirscheifer and Shumway, 2003). Unfortunately, whereas historical data always includes the closing price index at an exchange, other useful price-related data may not always be available (e.g. in Datastream only 36 of our 76 prices indices had a full set of daily high and low for the index). Even when external data is available, as presumably it is for daily weather in any of the world's cities, it may be difficult to interpret in a local context – what counts as fine weather in Singapore versus Toronto? These difficulties may limit the kinds of indicators that could supplement the PCA, as presented in this paper, to ones that process the price index itself. To conclude, the paper is the first to grasp the nettle of the multi-dimensionality of market inefficiency, i.e. efficient markets are all alike; however, for those inefficient markets, they can be inefficient in their own way. Although the multi-dimensional perspective makes life more difficult, it also makes it more realistic and more interesting. Researchers could use this paper, e.g. the index × indicator scores matrix, as a starting point for their own analyses. In this way, even if we cannot directly alleviate the “family unhappiness” of inefficient markets, we may at least augment the family therapist's stock of knowledge.