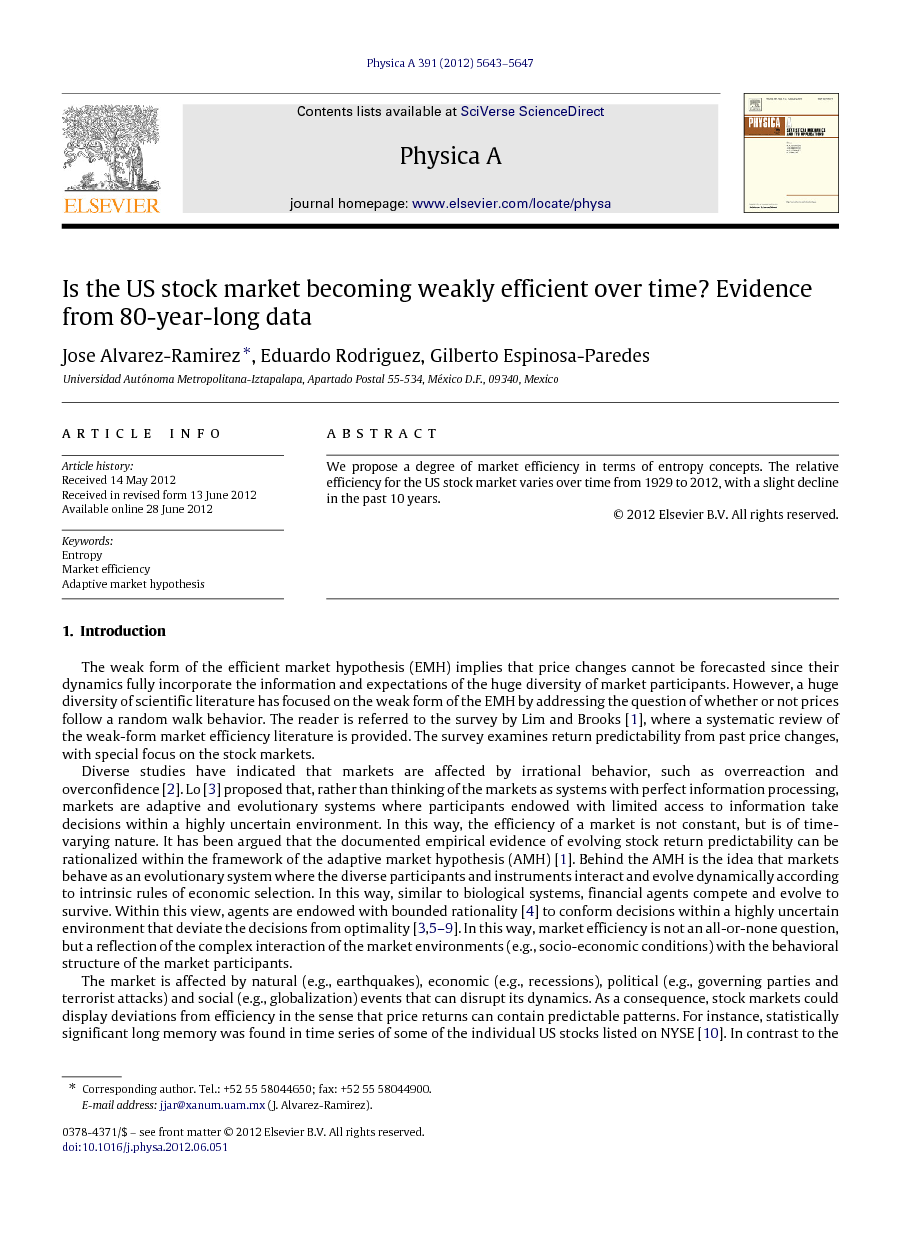 We propose a degree of market efficiency in terms of entropy concepts. The relative efficiency for the US stock market varies over time from 1929 to 2012, with a slight decline in the past 10 years.

The weak form of the efficient market hypothesis (EMH) implies that price changes cannot be forecasted since their dynamics fully incorporate the information and expectations of the huge diversity of market participants. However, a huge diversity of scientific literature has focused on the weak form of the EMH by addressing the question of whether or not prices follow a random walk behavior. The reader is referred to the survey by Lim and Brooks [1], where a systematic review of the weak-form market efficiency literature is provided. The survey examines return predictability from past price changes, with special focus on the stock markets. Diverse studies have indicated that markets are affected by irrational behavior, such as overreaction and overconfidence [2]. Lo [3] proposed that, rather than thinking of the markets as systems with perfect information processing, markets are adaptive and evolutionary systems where participants endowed with limited access to information take decisions within a highly uncertain environment. In this way, the efficiency of a market is not constant, but is of time-varying nature. It has been argued that the documented empirical evidence of evolving stock return predictability can be rationalized within the framework of the adaptive market hypothesis (AMH) [1]. Behind the AMH is the idea that markets behave as an evolutionary system where the diverse participants and instruments interact and evolve dynamically according to intrinsic rules of economic selection. In this way, similar to biological systems, financial agents compete and evolve to survive. Within this view, agents are endowed with bounded rationality [4] to conform decisions within a highly uncertain environment that deviate the decisions from optimality [3], [5], [6], [7], [8] and [9]. In this way, market efficiency is not an all-or-none question, but a reflection of the complex interaction of the market environments (e.g., socio-economic conditions) with the behavioral structure of the market participants. The market is affected by natural (e.g., earthquakes), economic (e.g., recessions), political (e.g., governing parties and terrorist attacks) and social (e.g., globalization) events that can disrupt its dynamics. As a consequence, stock markets could display deviations from efficiency in the sense that price returns can contain predictable patterns. For instance, statistically significant long memory was found in time series of some of the individual US stocks listed on NYSE [10]. In contrast to the predominant behavior of financial time series of developed markets where either very short or no serial auto-correlations exist in data, financial time series of emerging markets exhibit a different behavior [11]. A significantly long memory was found for weekly returns of a large number of Greek stocks [12] and for daily index returns recorded for ten transition economies in east and central Europe [13]. It has been also suggested that Hong Kong is the most efficient market followed by Chinese A type shares and Singapore and finally by Chinese B type shares [14], which suggests that liquidity and capital restrictions may play a role in explaining results of market efficiency tests. One interesting question is how the market efficiency has changed through time in response to, e.g., market operation changes and globalization. Departures from “full efficiency” are allowed as the market dynamics adapts to, e.g., changing conditions and external shocks. It has been argued that, under the AMH, convergence to equilibrium (which is central to the EMH) is neither guaranteed nor likely to occur at any time [3]. Systematic studies have shown that stock markets can exhibit temporal deviations from the weak form of the EMH. The work by Cajueiro, Tabak and coworkers [14], [15], [16], [17], [18], [19] and [20] has been motivating as it showed that methods from statistical mechanics can be used for quantifying the time-varying deviations from the weak-form of the EMH. Entropy is a conceptual framework that can be used for testing market efficiency since the analysis is based on the identification of patterns that are more likely to be found in price change sequences. Applications of entropy concepts for economics include results on detection of nonlinearities [21], predictability of price changes [22], classification of foreign exchange markets [23], crash forecasting [24] and analysis of the ’87 financial crash [25]. This work uses entropy concepts for characterizing market efficiency within the AMH framework. A market efficiency index is introduced in terms of the price change entropy relative to the entropy for uncorrelated Gaussian random sequences. Evidence from 80-year-long US data indicates that the relative market efficiency has changed over time, showing modest levels of local predictability only during limited time periods.