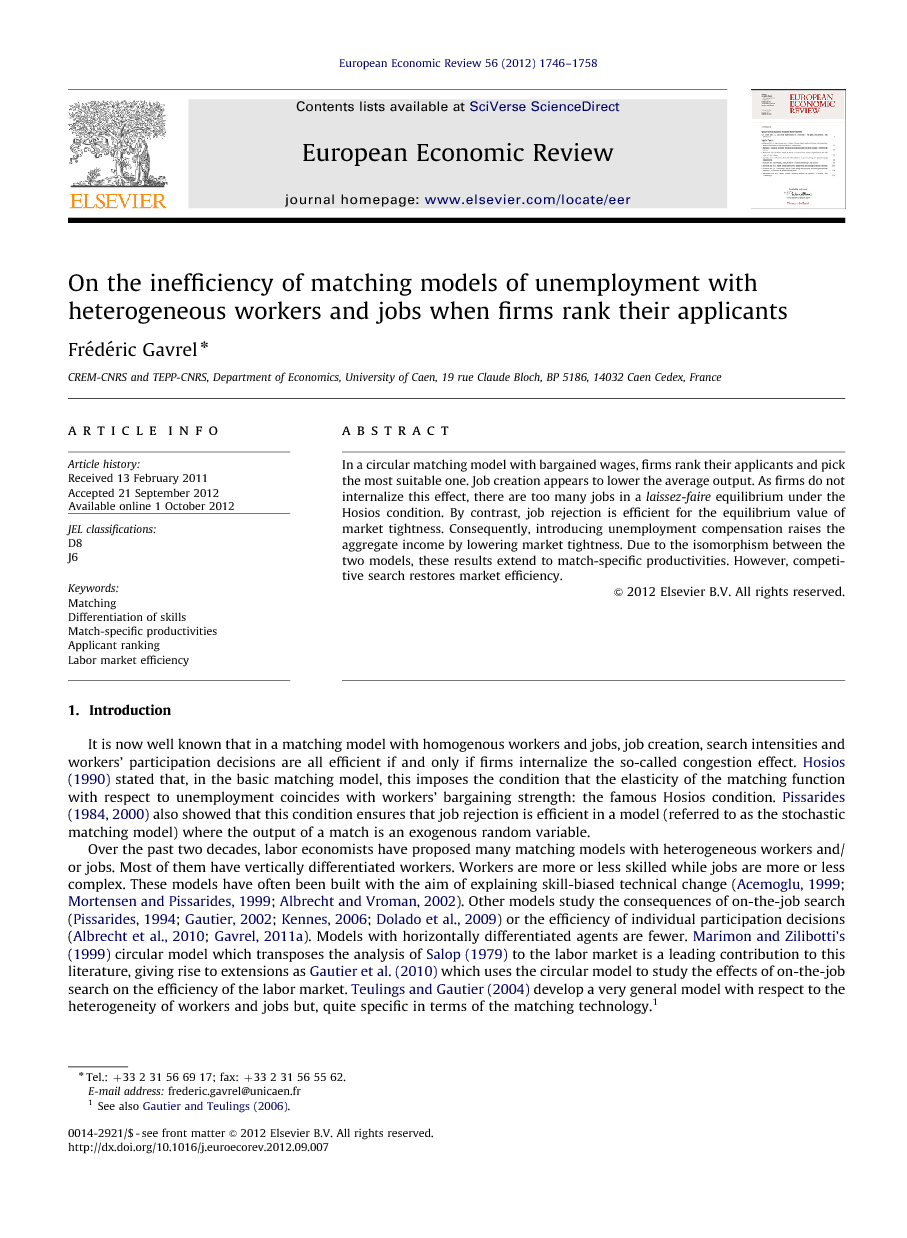 In a circular matching model with bargained wages, firms rank their applicants and pick the most suitable one. Job creation appears to lower the average output. As firms do not internalize this effect, there are too many jobs in a laissez-faire equilibrium under the Hosios condition. By contrast, job rejection is efficient for the equilibrium value of market tightness. Consequently, introducing unemployment compensation raises the aggregate income by lowering market tightness. Due to the isomorphism between the two models, these results extend to match-specific productivities. However, competitive search restores market efficiency.

It is now well known that in a matching model with homogenous workers and jobs, job creation, search intensities and workers' participation decisions are all efficient if and only if firms internalize the so-called congestion effect. Hosios (1990) stated that, in the basic matching model, this imposes the condition that the elasticity of the matching function with respect to unemployment coincides with workers' bargaining strength: the famous Hosios condition. Pissarides, 1984 and Pissarides, 2000 also showed that this condition ensures that job rejection is efficient in a model (referred to as the stochastic matching model) where the output of a match is an exogenous random variable. Over the past two decades, labor economists have proposed many matching models with heterogeneous workers and/or jobs. Most of them have vertically differentiated workers. Workers are more or less skilled while jobs are more or less complex. These models have often been built with the aim of explaining skill-biased technical change (Acemoglu, 1999, Mortensen and Pissarides, 1999 and Albrecht and Vroman, 2002). Other models study the consequences of on-the-job search (Pissarides, 1994, Gautier, 2002, Kennes, 2006 and Dolado et al., 2009) or the efficiency of individual participation decisions (Albrecht et al., 2010 and Gavrel, 2011a). Models with horizontally differentiated agents are fewer. Marimon and Zilibotti's (1999) circular model which transposes the analysis of Salop (1979) to the labor market is a leading contribution to this literature, giving rise to extensions as Gautier et al. (2010) which uses the circular model to study the effects of on-the-job search on the efficiency of the labor market. Teulings and Gautier (2004) develop a very general model with respect to the heterogeneity of workers and jobs but, quite specific in terms of the matching technology.1 All these papers assume that firms' recruitment is random. Firms randomly pick one worker from the pool of their applicants. Except for the (unrealistic) case in which the labor market is divided into as many sub-markets as worker types (as in Mortensen and Pissarides, 1999), this is a major assumption, and all the more heroic given that firms are usually assumed to have perfect knowledge of their applicants' productivities. This paper studies an economy where workers and jobs are differentiated in the same (circular) way as in Marimon and Zilibotti (1999). Contrary to the assumptions made in this paper and other related ones, firms do not draw one candidate at random; they rank their applicants and select the most suitable one. In order to account for this recruitment behavior, the technology of contacts is described by an extension of the urn-ball model. We show that, in the presence of applicant ranking, increasing the number of vacancies degrades the assignment of workers to jobs, consequently lowering average output. As firms do not internalize this effect, job creation is too high even when the Hosios condition is satisfied. We first present a simple static model. This static model helps us clearly explain how the ranking of applicants creates an additional externality for job creation. We then extend the analysis to a continuous-time dynamic setting with endogenous job rejection. Due to the same external effect, firms create too many vacancies. By contrast, job rejection is efficient for the laissez-faire value of market tightness. Consequently, introducing unemployment compensation raises the aggregate income of the economy by reducing job creation. Finally, we show that competitive search ( Moen, 1997) restores market efficiency. This alternative wage-setting mechanism provides a deeper understanding of the inefficiency of job creation with bargaining. Because the two models appear to be isomorphic, the analysis generalizes to match-specific productivities. As already mentioned, matching models usually assume that firms' recruitment is random. Two exceptions are Moen (1999) and Gavrel (2009); but in these papers workers are vertically differentiated while firms are identical. Moen (1999) shows that applicant ranking tends to create an over-education effect. Gavrel (2009) states that in the presence of applicant ranking, technical bias can be viewed as a response by firms to a general rise in unemployment. The second section presents the static model and exposes our main argument. We then show that the inefficiency result holds true in the stochastic matching model but that posted wages à la Moen (1997) ensures the efficiency of the labor market by making firms internalize all the consequences of job creation (Section 3). In Section 4, we present a dynamic setting in which some matches are not viable. Section 5 studies the welfare properties of a laissez-faire stationary equilibrium and states that introducing unemployment benefits raises the average output (as in Marimon and Zilibotti, 1999) and improves market efficiency.