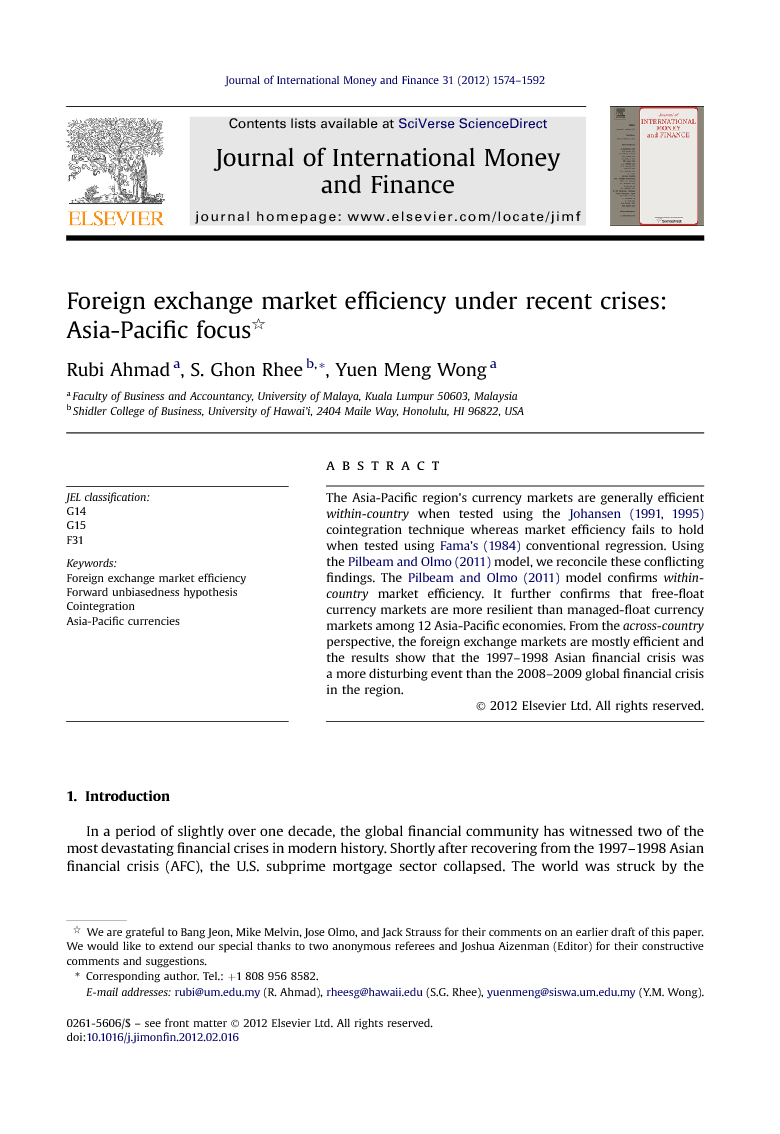 The Asia-Pacific region’s currency markets are generally efficient within-country when tested using the Johansen, 1991 and Johansen, 1995 cointegration technique whereas market efficiency fails to hold when tested using Fama’s (1984) conventional regression. Using the Pilbeam and Olmo (2011) model, we reconcile these conflicting findings. The Pilbeam and Olmo (2011) model confirms within-country market efficiency. It further confirms that free-float currency markets are more resilient than managed-float currency markets among 12 Asia-Pacific economies. From the across-country perspective, the foreign exchange markets are mostly efficient and the results show that the 1997–1998 Asian financial crisis was a more disturbing event than the 2008–2009 global financial crisis in the region.

In a period of slightly over one decade, the global financial community has witnessed two of the most devastating financial crises in modern history. Shortly after recovering from the 1997–1998 Asian financial crisis (AFC), the U.S. subprime mortgage sector collapsed. The world was struck by the unprecedented losses disclosed by the U.S. banking sector in 2008 and 2009 and, as a result, numerous U.S. and European financial institutions were adversely impacted by the 2008–2009 global financial crisis (GFC). We investigate the Asia-Pacific foreign currency markets because they were greatly impacted by the AFC and the volatility of these currencies increased tremendously during the GFC. Melvin and Taylor (2009) provide detailed accounts of GFC to illustrate its unforeseen impact on volatility and liquidity in the global currency market. The Asia-Pacific currencies are generally perceived to be more susceptible to financial crisis and speculative attacks. The main objective of this paper is to examine market efficiency of these currencies during the periods surrounding the crises, with the focus on both AFC and GFC as the key events. A few studies have examined market efficiency of Asian currencies (Jeon and Seo, 2003 and Kan and Andreosso-O’Callaghan, 2007). However, these studies focus on the impact of AFC (not GFC) in the region’s currency markets given their study periods. Our overall conclusion is that the AFC was a more disturbing event than the GFC in the Asia-Pacific region as stronger evidence of inefficiency is observed during the AFC than the GFC. To draw this conclusion, we have examined foreign currency market efficiency from within- and across-country perspectives. The Asia-Pacific foreign currency markets are generally efficient within-country when tested using the Johansen, 1991 and Johansen, 1995 cointegration technique whereas market efficiency fails to hold when tested using Fama’s (1984) conventional regression built on the forward unbiasedness hypothesis. The presence of the forward premium puzzle is not unique to the Asia-Pacific region under this conventional approach. Rather, global currency markets (both developed and developing) show that the forward premium is not only biased but also wrong ( Bilson, 1981, Fama, 1984, Froot and Thaler, 1990, Baillie and Bollerslev, 1989, Baillie and Bollerslev, 2000, Bansal and Dahlquist, 2000, Sarno, 2005, Gilmore and Hayashi, 2008 and Frankel and Poonawala, 2010). The failure of Fama’s regression results in supporting market efficiency is not unexpected in view of a number of more recent alternative explanations for the inadequacy of forward unbiasedness in assessing market efficiency [the adverse selection problem by traders ( Burnside et al., 2009); improper treatment of different volatilities between forward and spot rates ( Pilbeam and Olmo, 2011); perpetual learning by agents ( Chakraborty and Evans, 2008); the different orders of integration of the variables in Fama’s regressions ( Baillie and Bollerslev, 2000); volatility regimes ( Clarida et al., 2009); more easily identifiable trends of depreciation of emerging market currencies ( Frankel and Poonawala, 2010)]. While various alternative explanations have merits in understanding the forward premium puzzle, our study is limited in scope to using the Pilbeam and Olmo (2011) model when we reconcile the conflicting findings for within-country market efficiency under the two different approaches. Pilbeam and Olmo (2011) conclude that the forward discount puzzle is a statistical phenomenon after they examine four major currencies (Swiss franc; Japanese yen; Euro; and Pound sterling) in their model framework. 1 The availability of Asia-Pacific currency data allows us to apply the Pilbeam and Olmo model to the Asia-Pacific currency markets to generalize their findings. Our study is the first which confirms Pilbeam and Olmo’s (2011) findings in the Asia-Pacific currency markets. We find that Asia-Pacific currency markets are consistent with within-country market efficiency when re-examined using the Pilbeam and Olmo model. We further confirm that free-float currency markets are more resilient than the managed-float currency markets among 12 Asia-Pacific countries. The availability of Asia-Pacific currency data allows us to make an additional major contribution to the literature. In an insightful study, Bansal and Dahlquist (2000) observe that the forward premium puzzle characterized by the negative correlation between expected exchange rates and interest-rate differentials is not a pervasive phenomenon. It is rather confined to high GNP per capita economies. They report that country attributes, such as income level, inflation rates, and inflation uncertainty, are important in explaining the cross-sectional dispersion in the risk premium. In this study, we introduce another important attribute which measures the degree of foreign exchange market regulation. This attribute is proxied by the existence of offshore non-deliverable currency forwards (NDFs). The NDF markets were developed after the AFC outside the jurisdiction of countries with varying degrees of foreign exchange convertibility restrictions because the access to onshore forward markets was limited to non-resident investors (Tsuyuguchi and Wooldridge, 2008). Asian monetary authorities regard the NDF markets with suspicion because of their concern about cross-border spillovers and speculative activities even though NDFs are useful for hedging currency risk exposure (Ma et al., 2004). Naturally, the presence of NDF markets implies a less-liberalized regulatory regime whereas its absence indicates a liberalized regime. We find that the degree of market liberalization is another important attribute in explaining the existence of forward bias puzzle. This finding is informative because our study period goes beyond Bansal and Dahlquist’s (2000) study period of 1976–1998 and covers additional Asia-Pacific currencies. From the across-country perspective, the foreign exchange markets are generally efficient when tested using the bivariate cointegration methods for the whole period with the exception of crisis subperiods. Comparing the crisis periods, the bivariate cointegration test results show that there are more currency pairs that display the sign of inefficiency during the AFC more than GFC. In the AFC subperiod, most of the cointegrated currency pairs are Thai baht crosses.

We conclude this paper by discussing the implications of our results to the academic, policy makers and market practitioners. From the academic perspective, we have shown that the EMH is generally valid in the long run and only report some evidence of inefficiency during certain subsample periods. Our results lend credence to the arguments in support of market efficiency and forward unbiasedness hypothesis put forth by Fama, 1998 and Baillie and Bollerslev, 2000 and Lothian and Wu (2011). From the policy making perspective, our results indicate that the free-float foreign exchange regime to be more resilient than the managed-float counterpart as the currencies under the former regime tend to display a more consistent pattern of efficiency. If the concern of the monetary authority is the market efficiency, they should adopt a free-float regime. However, more often than not, the main concern of the monetary authority is the general welfare of the state of economy instead of market efficiency. Finally, there are reports showing the forward bias puzzle is exploited by market participants and traded for profits [e.g. Burnside et al., 2007, Galati et al., 2007, Clarida et al., 2009 and Hochradl and Wagner, 2010]. Our results show that this trading strategy may not be a wise one as the forward bias puzzle is only a temporary phenomenon waiting for market correction. We witness the reversal of fortune for carry trade when the estimated Fama beta turns from negative to positive which happened throughout our sample period. Therefore we do not think that the recommendation from Hochradl and Wagner (2010) regarding the superiority of carry trade as a trading strategy is a sound one. Of course, our paper has the benefit of hindsight to include the GFC which Hochradl and Wagner (2010) does not. As a caveat, our comment related to carry trade is based on general observation from our results. A more in depth and specialised research is necessary to verify our hypothesis regarding the effectiveness of currency carry trade.