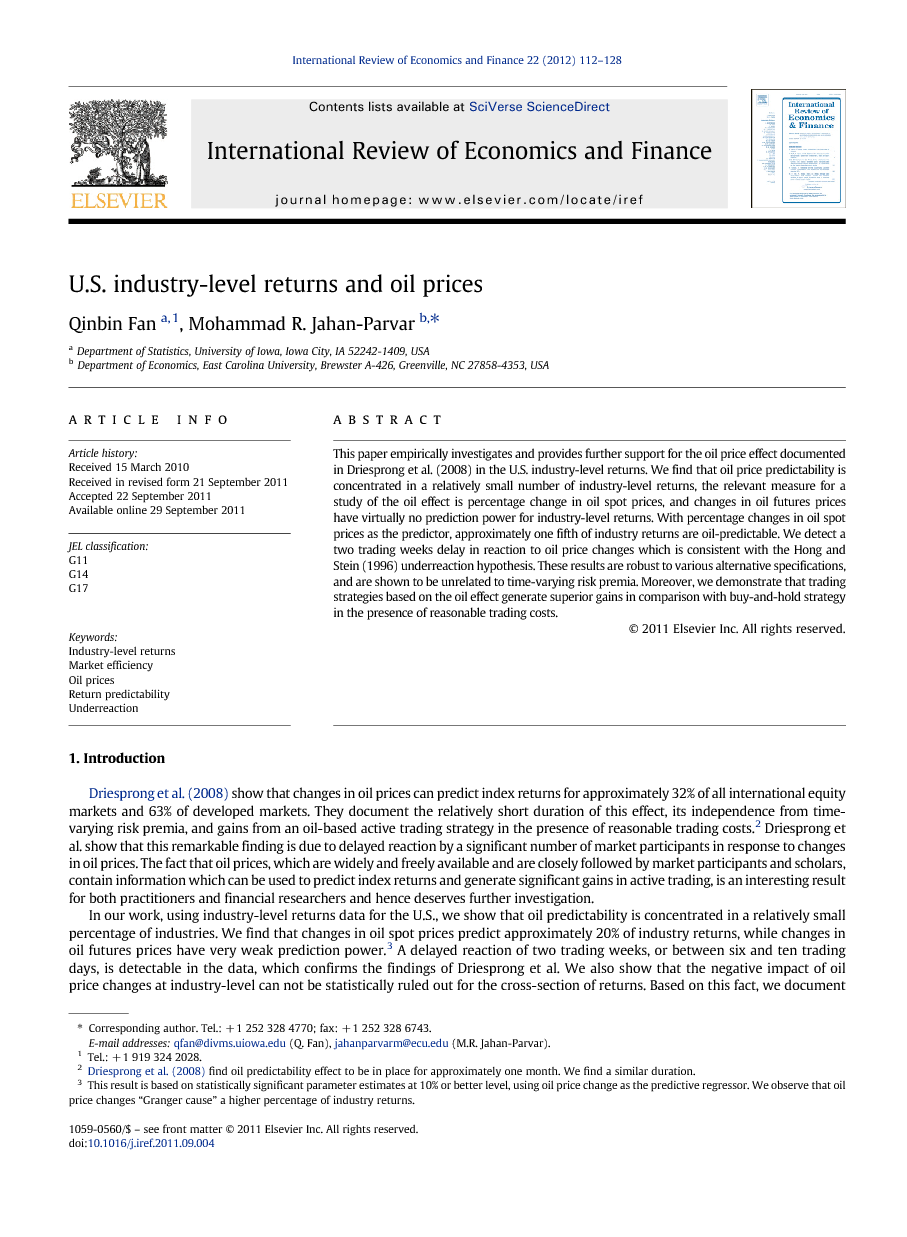 This paper empirically investigates and provides further support for the oil price effect documented in Driesprong et al. (2008) in the U.S. industry-level returns. We find that oil price predictability is concentrated in a relatively small number of industry-level returns, the relevant measure for a study of the oil effect is percentage change in oil spot prices, and changes in oil futures prices have virtually no prediction power for industry-level returns. With percentage changes in oil spot prices as the predictor, approximately one fifth of industry returns are oil-predictable. We detect a two trading weeks delay in reaction to oil price changes which is consistent with the Hong and Stein (1996) underreaction hypothesis. These results are robust to various alternative specifications, and are shown to be unrelated to time-varying risk premia. Moreover, we demonstrate that trading strategies based on the oil effect generate superior gains in comparison with buy-and-hold strategy in the presence of reasonable trading costs.

We use disaggregated data to take a closer look at the oil effect documented by Driesprong et al. (2008). Our findings provide important empirical support for Driesprong et al. study of statistically significant oil price predictability in equity returns. We use forty nine U.S. industry-level return series and changes in West Texas Intermediate spot and NYMEX light sweet crude futures prices to verify the source of predictability of stock returns. Moreover, we study the predictive sensitivity of industry-level returns to measures of net oil price increase or decrease. Our findings provide several important refinements to the original results of Driesprong et al., both for the oil effect and the underreaction hypothesis. We find that industry-level returns in slightly less than twenty percent of the forty nine U.S. industries studied in this paper can be predicted using logarithmic differences in West Texas Intermediate spot prices as predictor. Moreover, we find that this predictability almost disappears when we use logarithmic differences of NYMEX light sweet crude futures prices. These results imply that oil-price predictability is concentrated in relatively small number of industries. We also find that Granger-causality tests indicate that around 40% of industry-level returns show predictive sensitivity to oil spot price changes, but this may not directly translate to statistical significance of estimated parameters at conventional levels. Based on various robustness checks, we conclude that predictability is rather short lived, it is lost beyond a one-month lag. Less than 10% of industry-level returns demonstrate signs of contemporaneous correlation with oil returns. We find suggestive, but inconclusive, evidence of the presence of non-synchronous trading in a number of industry returns. Our results are robust to the use of excess returns, instead of raw returns, in the regression analysis. In addition, we find that the oil effect seems to be independent of time-varying risk premia. Our findings differ in an important dimension from Driesprong et al. We show that gains from trading based on an “oil strategy” are sensitive to the size of trading costs. Existence of the oil effect seems to be a feature of the U.S. financial markets. We find that our results are consistent with the delayed reaction hypothesis among investors. In particular, by carrying out regression analysis between industry-level returns and lagged changes in monthly oil prices, we find a two trading-week lagged response to new information about oil prices. We interpret this results as a six to ten trading day delay by a significant number of investors. This is consistent with the assertion that investors wake up to information at different points in time, as proposed by Hong and Stein (1996) and refined by Hong et al. (2007). Based on our findings, we believe that investors underestimate the indirect economic effects of oil price changes and take action with a non-negligible delay. We find that our results are more pronounced in non-oil related sectors such as construction and business services.