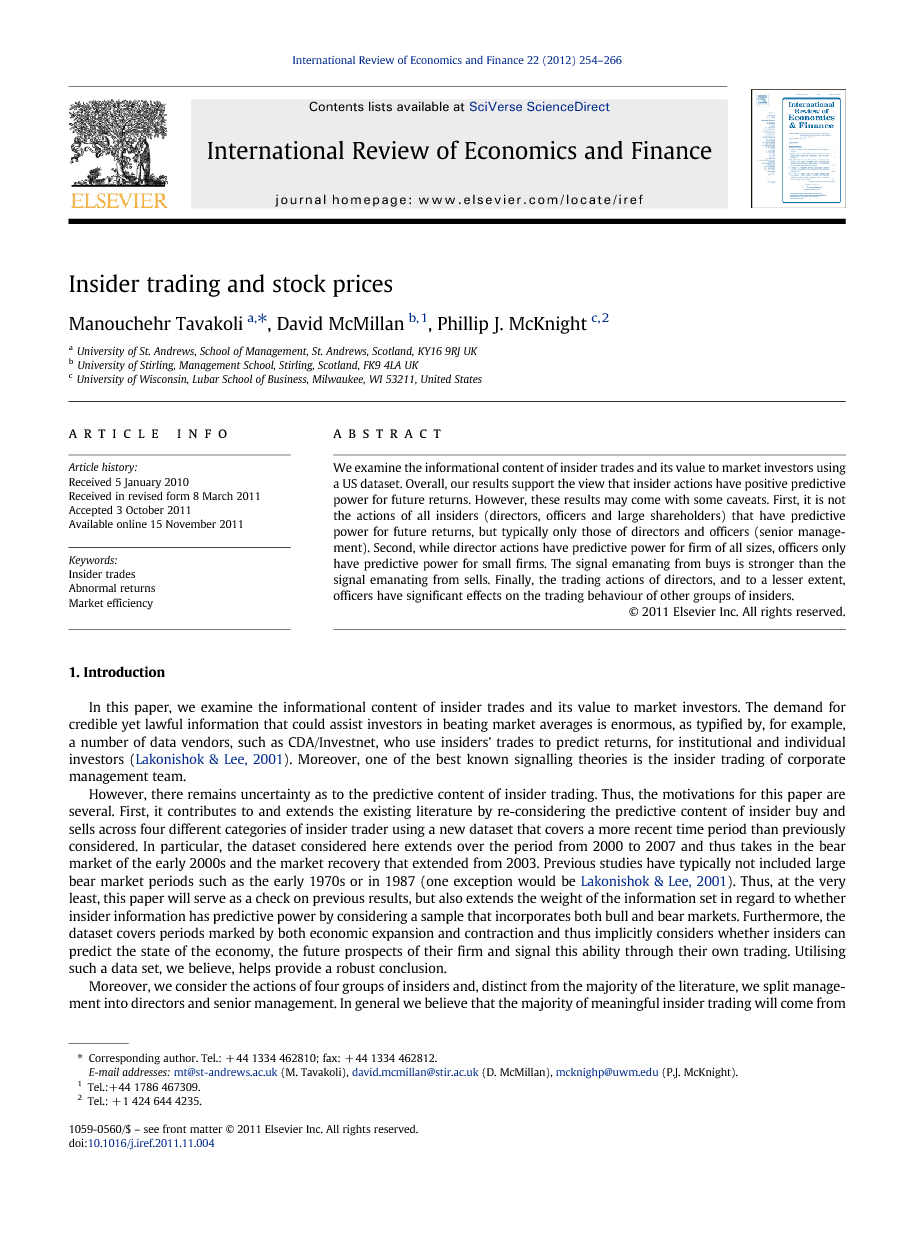 This paper seeks to analyse whether insiders have information that could lead to profitable trading. Using a new dataset of insider activities, we examine whether insider trading has information content for stock returns. In particular, we seek to contribute to the literature in four ways. First, we use an extended dataset covering both ball and bear markets and economic expansions and contractions. Second, we split the management team into directors and senior management to examine for a hierarchy of information and interaction. Third, we see whether the results differ by firm size. Fourth, we examine whether insiders' trading behaviours are affected by other insider groups or past returns. Our results suggest the following conclusions. First, looking across all firms and insider behaviour as determined by three alternate measures of insider activity (number of transactions, volume of transactions and the value of transactions), our estimated results are generally supportive of a positive relationship between insider activity and future returns. This is consistent with our intuitive belief, where net purchases are positive (negative), such that insiders believe that the future value of the firm will increase, then future returns are also positive (negative). Second, consistent with the hypothesis that those engaged in decision-making will have the greatest signalling effect, significant predictive power for future returns arises from the actions of directors and officers only. These results are robust to the inclusion of alternative, publicly available information, such as the dividend yield, price-earnings ratio and a variety of other relevant variables. Third, having established that directors and officers have significant explanatory power across firms and insider trades, we break down our analysis by firm size and buy/sell. Here the results suggest that for all firm sizes directors still have predictive power, while for officers the predictive effect of insider activity only occurs for small firms. This latter result is consistent with previously reported results, although the former is different and suggests that the actions of executives can act as a signal regardless of firm size. With regard to the influence of net buy and sell behaviour, our results demonstrate that both directors and officers have the correct sign and are statistically significant. That is, a positive coefficient indicating that net buys lead to increased future returns and net sell leads to decreased future returns. Although, the response of returns is great for a buy, suggesting the signal from buys is stronger than the signal from sells. This is consistent with the view that while sells may signal the insiders' expectations of future performance, sells may also occur for other reasons, such as liquidity. Fourth, we consider is what factors affect the decision of insiders to trade. To this end, we estimate a regression where the dependent variable is the number of transactions undertaken by an insider, with all remaining variables, including a lag of other insiders' number of transactions, as explanatory variables. These results suggest that insider tends to trade at the same time, with the actions of directors affecting the trading behaviour of other insider types, while both officers and large shareholders have an effect on some other groups of insider. In sum, our results support the view that director and officer actions do have positive predictive power for future returns, and that these insiders and any outsider who was able to mimic their behaviour, could make positive trading returns. In addition, while director actions have predictive power for firm of all sizes, officers only have predictive power for small firms. The signal emanating from buys is stronger than the signal emanating from sells. Finally, the trading actions of directors, and to a lesser extent, officers have significant effects on the trading behaviour of other groups of insiders.