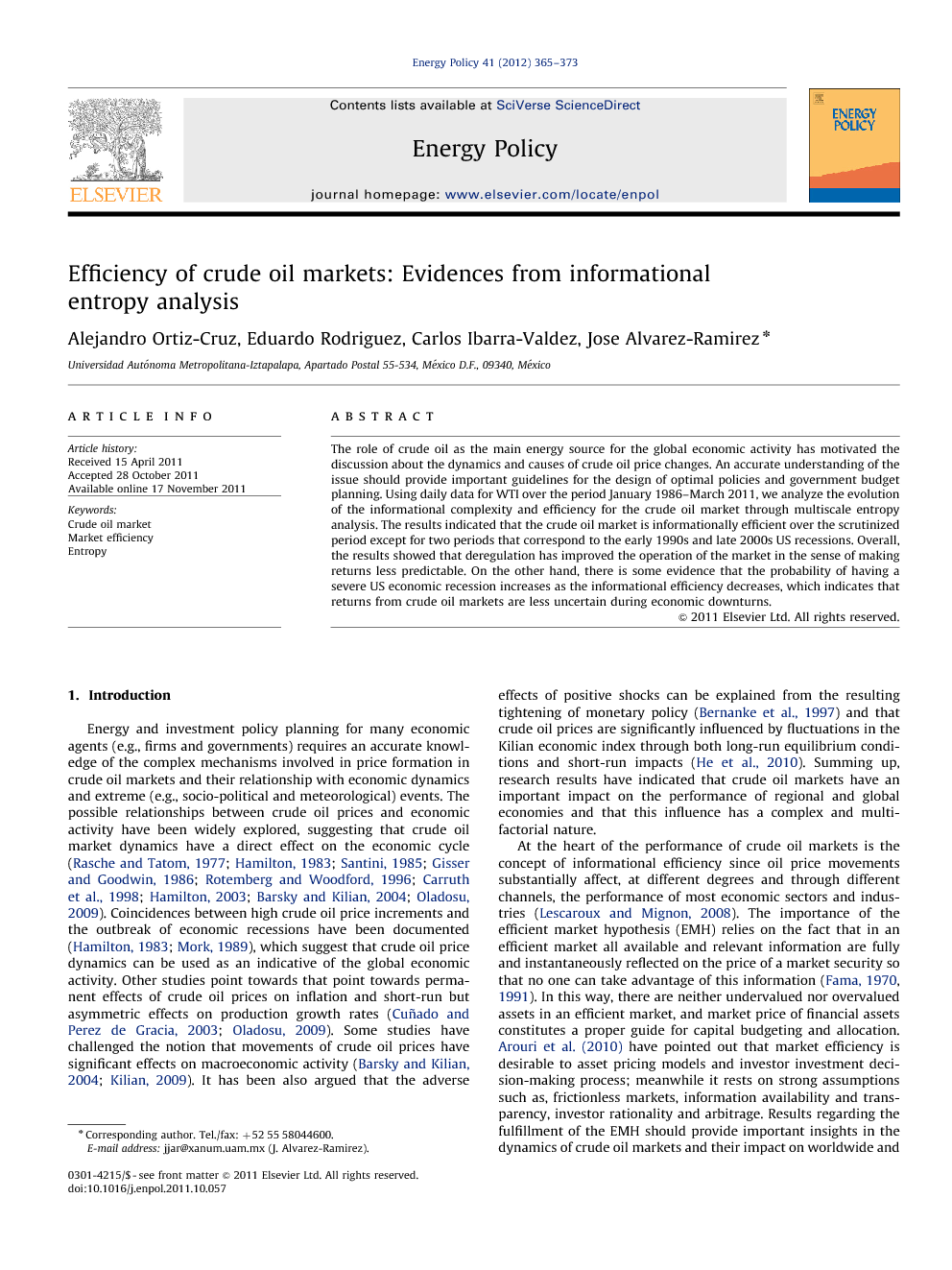 The role of crude oil as the main energy source for the global economic activity has motivated the discussion about the dynamics and causes of crude oil price changes. An accurate understanding of the issue should provide important guidelines for the design of optimal policies and government budget planning. Using daily data for WTI over the period January 1986–March 2011, we analyze the evolution of the informational complexity and efficiency for the crude oil market through multiscale entropy analysis. The results indicated that the crude oil market is informationally efficient over the scrutinized period except for two periods that correspond to the early 1990s and late 2000s US recessions. Overall, the results showed that deregulation has improved the operation of the market in the sense of making returns less predictable. On the other hand, there is some evidence that the probability of having a severe US economic recession increases as the informational efficiency decreases, which indicates that returns from crude oil markets are less uncertain during economic downturns.

Energy and investment policy planning for many economic agents (e.g., firms and governments) requires an accurate knowledge of the complex mechanisms involved in price formation in crude oil markets and their relationship with economic dynamics and extreme (e.g., socio-political and meteorological) events. The possible relationships between crude oil prices and economic activity have been widely explored, suggesting that crude oil market dynamics have a direct effect on the economic cycle (Rasche and Tatom, 1977, Hamilton, 1983, Santini, 1985, Gisser and Goodwin, 1986, Rotemberg and Woodford, 1996, Carruth et al., 1998, Hamilton, 2003, Barsky and Kilian, 2004 and Oladosu, 2009). Coincidences between high crude oil price increments and the outbreak of economic recessions have been documented (Hamilton, 1983 and Mork, 1989), which suggest that crude oil price dynamics can be used as an indicative of the global economic activity. Other studies point towards that point towards permanent effects of crude oil prices on inflation and short-run but asymmetric effects on production growth rates (Cuñado and Perez de Gracia, 2003 and Oladosu, 2009). Some studies have challenged the notion that movements of crude oil prices have significant effects on macroeconomic activity (Barsky and Kilian, 2004 and Kilian, 2009). It has been also argued that the adverse effects of positive shocks can be explained from the resulting tightening of monetary policy (Bernanke et al., 1997) and that crude oil prices are significantly influenced by fluctuations in the Kilian economic index through both long-run equilibrium conditions and short-run impacts (He et al., 2010). Summing up, research results have indicated that crude oil markets have an important impact on the performance of regional and global economies and that this influence has a complex and multifactorial nature. At the heart of the performance of crude oil markets is the concept of informational efficiency since oil price movements substantially affect, at different degrees and through different channels, the performance of most economic sectors and industries (Lescaroux and Mignon, 2008). The importance of the efficient market hypothesis (EMH) relies on the fact that in an efficient market all available and relevant information are fully and instantaneously reflected on the price of a market security so that no one can take advantage of this information (Fama, 1970 and Fama, 1991). In this way, there are neither undervalued nor overvalued assets in an efficient market, and market price of financial assets constitutes a proper guide for capital budgeting and allocation. Arouri et al. (2010) have pointed out that market efficiency is desirable to asset pricing models and investor investment decision-making process; meanwhile it rests on strong assumptions such as, frictionless markets, information availability and transparency, investor rationality and arbitrage. Results regarding the fulfillment of the EMH should provide important insights in the dynamics of crude oil markets and their impact on worldwide and regional economies. In the following section, a literature review of the some salient contributions to the empirical analysis of crude oil market informational efficiency is provided. Subsequently, the main contribution of our work relative to existing results is described. The remainder of the paper is organized as follows. Section 2 provides a review of the main results reported in the scientific literature. Section 3 describes the empirical entropy method used to characterize the dynamics of crude oil prices and to explore the possibility of sudden changes in market efficiency. Section 4 presents the data. Section 5 discusses the results obtained. Section 6 concludes the paper and suggests some policy implications arising from the results.

This work used multiscale entropy analysis to study the complexity and efficiency of crude oil markets in the recent 25 years. The idea behind the application of multiscale entropy methods is that the higher the entropy, the wider the diversity of price fluctuations patterns. In turn, this implies that a market with high entropy values is more complex than those with smaller entropy values. In this way, the entropy method implemented on a rolling window scheme indicated: (a) The results are in-line with previous findings (Alvarez-Ramirez et al., 2008, Elder and Serletis, 2008 and Arouri et al., 2010) in that we show evidence of time-varying market efficiency for daily crude oil returns over the deregulation period starting in 1986. (b) The multiscale entropy framework allowed the introduction of a scale-dependent index to quantify the degree of market efficiency. Except for two periods corresponding to the early 1990s and late 2000s US economic recessions, the efficiency index is 100% since the multiscale entropy pattern displays a behavior similar to that of uncorrelated noise. Given the scale-dependent complexity and efficiency of crude oil market, it would be in the interest of different market participants, from investors that search for profit opportunities within active investment strategies, to governments that should adjust public budget according to particular country conditions. For instance, in the aftermath of a recession triggering, the crude oil price becomes more predictable since firms will postpone long-term investment as they look for a certain directionality of the recession recovery (Bernanke, 1983). After a recession period, when economic activity is oriented to increase energy consumption, investors are prompted to look for long-term investment strategies. In turn, crude oil market complexity increases and price movements become more uncertain, which is reflected as increments of long-run entropy values. For global investors who allocate portions of their portfolios to crude oil products, the results imply that short- and mid-term benefits can be obtained from an active investment strategy during recessions and exogenous shocks when the market exhibits a high degree of predictability (low degree of price return patterns), while taking into account trading and transaction costs.