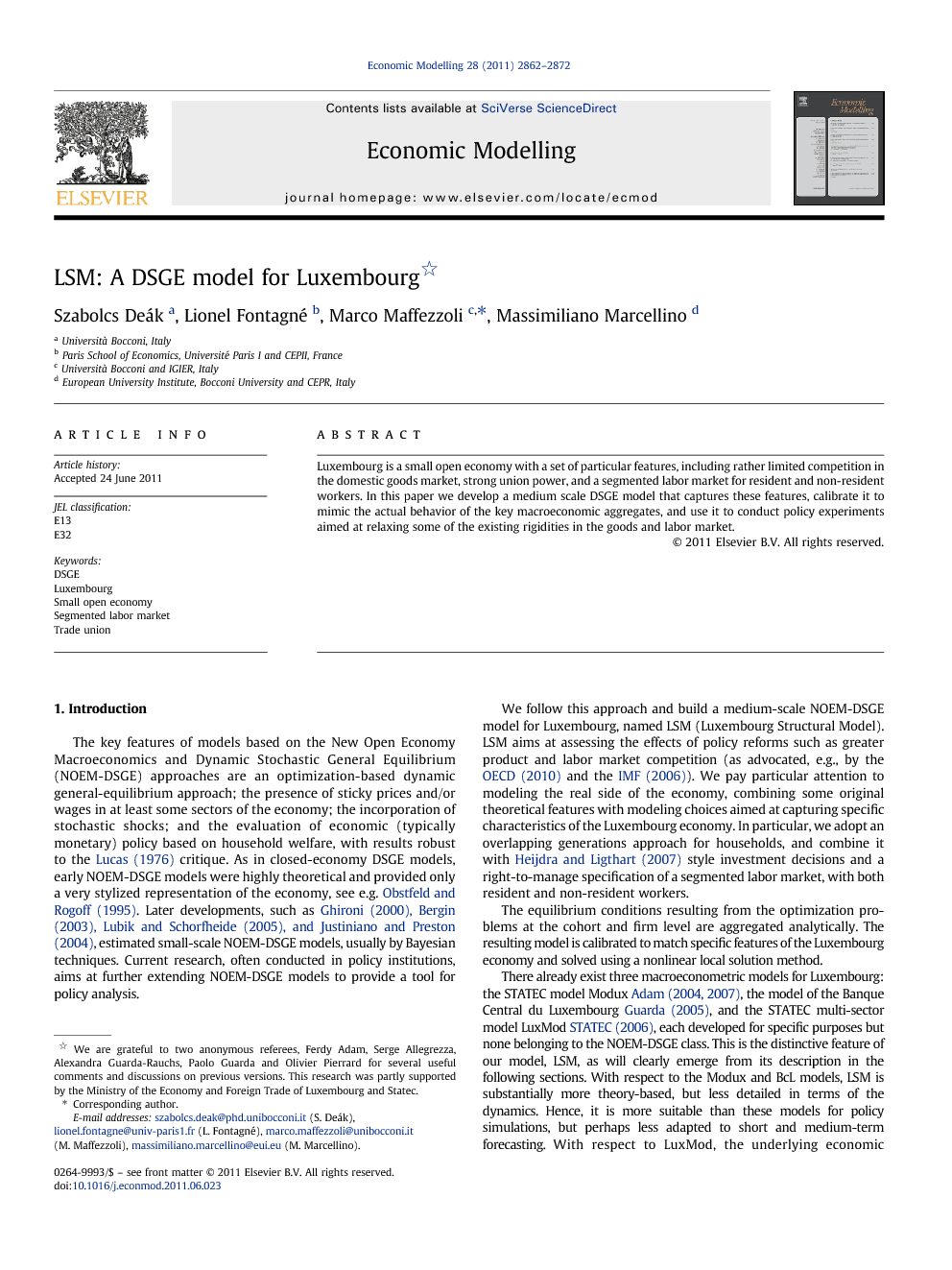 Luxembourg is a small open economy with a set of particular features, including rather limited competition in the domestic goods market, strong union power, and a segmented labor market for resident and non-resident workers. In this paper we develop a medium scale DSGE model that captures these features, calibrate it to mimic the actual behavior of the key macroeconomic aggregates, and use it to conduct policy experiments aimed at relaxing some of the existing rigidities in the goods and labor market.

The key features of models based on the New Open Economy Macroeconomics and Dynamic Stochastic General Equilibrium (NOEM-DSGE) approaches are an optimization-based dynamic general-equilibrium approach; the presence of sticky prices and/or wages in at least some sectors of the economy; the incorporation of stochastic shocks; and the evaluation of economic (typically monetary) policy based on household welfare, with results robust to the Lucas (1976) critique. As in closed-economy DSGE models, early NOEM-DSGE models were highly theoretical and provided only a very stylized representation of the economy, see e.g. Obstfeld and Rogoff (1995). Later developments, such as Ghironi, 2000, Bergin, 2003, Lubik and Schorfheide, 2005 and Justiniano and Preston, 2004, estimated small-scale NOEM-DSGE models, usually by Bayesian techniques. Current research, often conducted in policy institutions, aims at further extending NOEM-DSGE models to provide a tool for policy analysis. We follow this approach and build a medium-scale NOEM-DSGE model for Luxembourg, named LSM (Luxembourg Structural Model). LSM aims at assessing the effects of policy reforms such as greater product and labor market competition (as advocated, e.g., by the OECD (2010) and the IMF (2006)). We pay particular attention to modeling the real side of the economy, combining some original theoretical features with modeling choices aimed at capturing specific characteristics of the Luxembourg economy. In particular, we adopt an overlapping generations approach for households, and combine it with Heijdra and Ligthart (2007) style investment decisions and a right-to-manage specification of a segmented labor market, with both resident and non-resident workers. The equilibrium conditions resulting from the optimization problems at the cohort and firm level are aggregated analytically. The resulting model is calibrated to match specific features of the Luxembourg economy and solved using a nonlinear local solution method. There already exist three macroeconometric models for Luxembourg: the STATEC model Modux Adam, 2004 and Adam, 2007, the model of the Banque Central du Luxembourg Guarda (2005), and the STATEC multi-sector model LuxMod STATEC (2006), each developed for specific purposes but none belonging to the NOEM-DSGE class. This is the distinctive feature of our model, LSM, as will clearly emerge from its description in the following sections. With respect to the Modux and BcL models, LSM is substantially more theory-based, but less detailed in terms of the dynamics. Hence, it is more suitable than these models for policy simulations, but perhaps less adapted to short and medium-term forecasting. With respect to LuxMod, the underlying economic theory is also more developed and coherent, but there is no sectoral disaggregation. Hence, LSM should be more appropriate than any of the existing models to evaluate the aggregate effects of changes in economic policy. To conclude, while some features of LSM are tailored to the specificities of the Luxembourg economy, its overall structure could be easily adapted to assess economic policy in other small open economies. The paper is structured as follows. In Section 2 we describe the different sectors of LSM. In Section 3 we briefly discuss the equilibrium conditions, with full details provided in Appendix A. In Section 4 we discuss the calibration of LSM, with full details in Appendix B. In Section 5 we use LSM to analyze the effects of increasing competition in the Luxembourg product and labor markets. Finally, in Section 6 we summarize the main results and propose directions for further development.

In this paper we have developed a structural macroeconometric model for Luxembourg of the NOEM-DSGE type. The model, labeled LSM for Luxembourg Structural Model, is characterized by a careful theory-based specification of the economy, which is represented by households, government, firms and unions, which interact in the product, labor and financial markets. A properly calibrated version of LSM provides useful qualitative insights on the expected consequences of changes in economic policy, and can also be relevant to assess the effects and propagation of several types of economic shocks. While LSM includes a set of specific features of the Luxembourg economy, such as a segmented labor market combined with strong union power, its general structure can be of wider interest for modeling small open economies. To conclude, there is of course scope for additional research in this area, ranging from estimation of a simplified version of the model to the specification of an even more complex model to represent the financial sector more carefully.