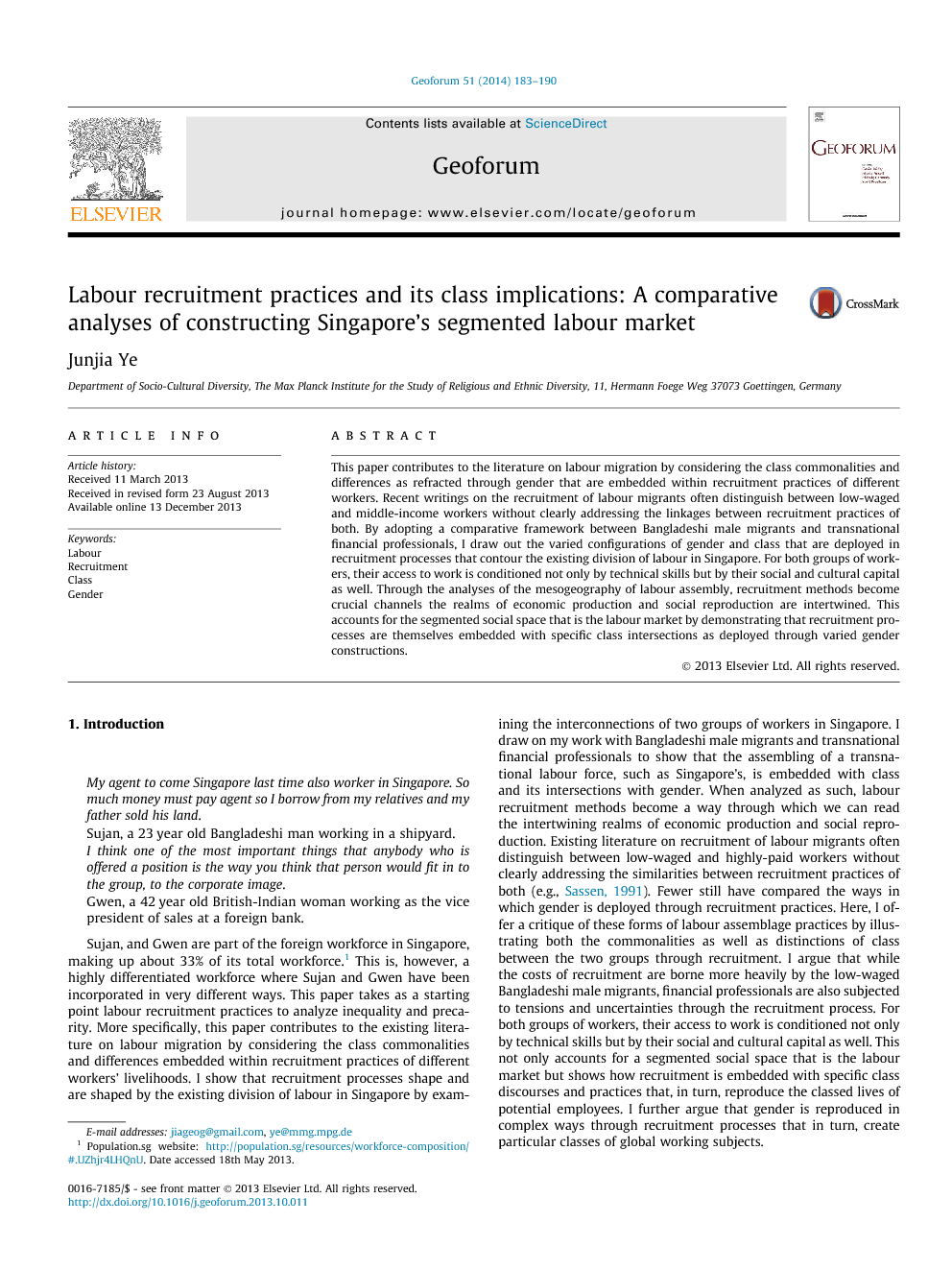 This paper contributes to the literature on labour migration by considering the class commonalities and differences as refracted through gender that are embedded within recruitment practices of different workers. Recent writings on the recruitment of labour migrants often distinguish between low-waged and middle-income workers without clearly addressing the linkages between recruitment practices of both. By adopting a comparative framework between Bangladeshi male migrants and transnational financial professionals, I draw out the varied configurations of gender and class that are deployed in recruitment processes that contour the existing division of labour in Singapore. For both groups of workers, their access to work is conditioned not only by technical skills but by their social and cultural capital as well. Through the analyses of the mesogeography of labour assembly, recruitment methods become crucial channels the realms of economic production and social reproduction are intertwined. This accounts for the segmented social space that is the labour market by demonstrating that recruitment processes are themselves embedded with specific class intersections as deployed through varied gender constructions.

An examination of the labour recruitment process highlights some of the main problems confronting many seeking employment and inclusion in the global economy. I demonstrated the interconnections between both groups of workers, characterized by similarities and distinctions between the groups. I reveal that in spite of their commonalities, the process of creating the global working subject is embedded with gender that is deployed in differing ways for both groups. Most straightforwardly, my comparative empirical analysis discusses the differentiated costs of entry into the global economy. My main argument is that access to work for both low-waged and middle-income migrants requires more than simply technical skills as demonstrated through Bourdieu’s notions of capital and their intersections with gender. I demonstrated that constituted by multi-level processes, recruitment practices do not only lead workers to different jobs but also require uneven configurations of capital from different workers. Through a discussion of state policies towards foreign labour, it becomes clear that the geography of recruitment for both groups of workers is structured through such institutionalized measures. While recruiters do not screen for social capital in Bangladeshi male migrants to the same extent as they do with financial professionals, the existing division of labour, the unregulated and highly localized methods of recruitment and the high agent fees nonetheless require the migrant to mobilize his social networks for a job in Singapore. Similar to the financial professional, however, lowwaged Bangladeshi men are also hired for perceived qualities tied to their masculinity that are beyond their technical capabilities. While it may be tempting to dismiss financial professionals as having a ‘‘better bargain’’, careful expressions of forms of cultural and symbolic capital emerge as a more pronounced indication of an individual’s value at work as seen through recruitment practices. In spite of the banks’ articulation of policies and values that emphasize ‘‘diversity’’ and ‘‘inclusion’’, there is a very specific type of individual that gains entry into the professional classes in financial work and after initial access, there are also specific task allocations for particular types of people within the sector. Indeed, the notion of ‘‘diversity’’ is used as a screening tool as well as a culmination of processes that select particular groups of people to be included in the social networks and knowledge-transfer – elements that contribute to work success. The performance of the ideal employee at the point of recruitment hence serves to produce and 8 This term refers to effeminate men. reproduce the power inequalities to the extent that there are specific displays of employees’ gendered selves that are constructed as ‘‘fitting’’ with the organization’s supposed cosmopolitan values and task allocation. It becomes reasonable to think that the on-going performance of a professional cosmopolitan identity is much more fragmented when we take these historical and social backgrounds of employees into consideration. The variability in recruitment practices of the two case studies presented here is significant in not just illustrating the differences in recruitment practices for different workers but also in articulating the different configurations of capital required of laboring bodies. At the same time, however, there are commonalities to be drawn from these practices as well. The comparative perspective presented here sheds light not only on the precarities faced by low-waged migrants but also by financial professionals where gender intersects with various forms of capital, reproducing class through recruitment. The workers in this study emerged as subjects through the nexus of structures and power relations that not only located certain groups of people in particular positions within the division of labour in Singapore but also produced certain ways of being. Class inequality exists beyond its theoretical representations: it is entirely central to the lives of the workers, consciously or pre-reflexively. Further, these are reproduced through recruitment practices at various levels, from the state, to the recruiters, to the firm, to the workers themselves. Within this form of economic organization, each group of workers is incorporated and valued differently and had differentiated access to resources. Class, in these terms, is structural – in that the division of labour organizes what economic opportunities are available to them. Class is also operated through a myriad of capital transformations – culturally, symbolically, economically – which are more available to some workers than others. Related to this, class is also dispositional, reproduced by one’s habitus. As I have demonstrated with two case studies in this paper, the deployment of gender within each group is not only about creating their lived experiences as men or as women but plays a crucial role in recreating them as global working subjects.