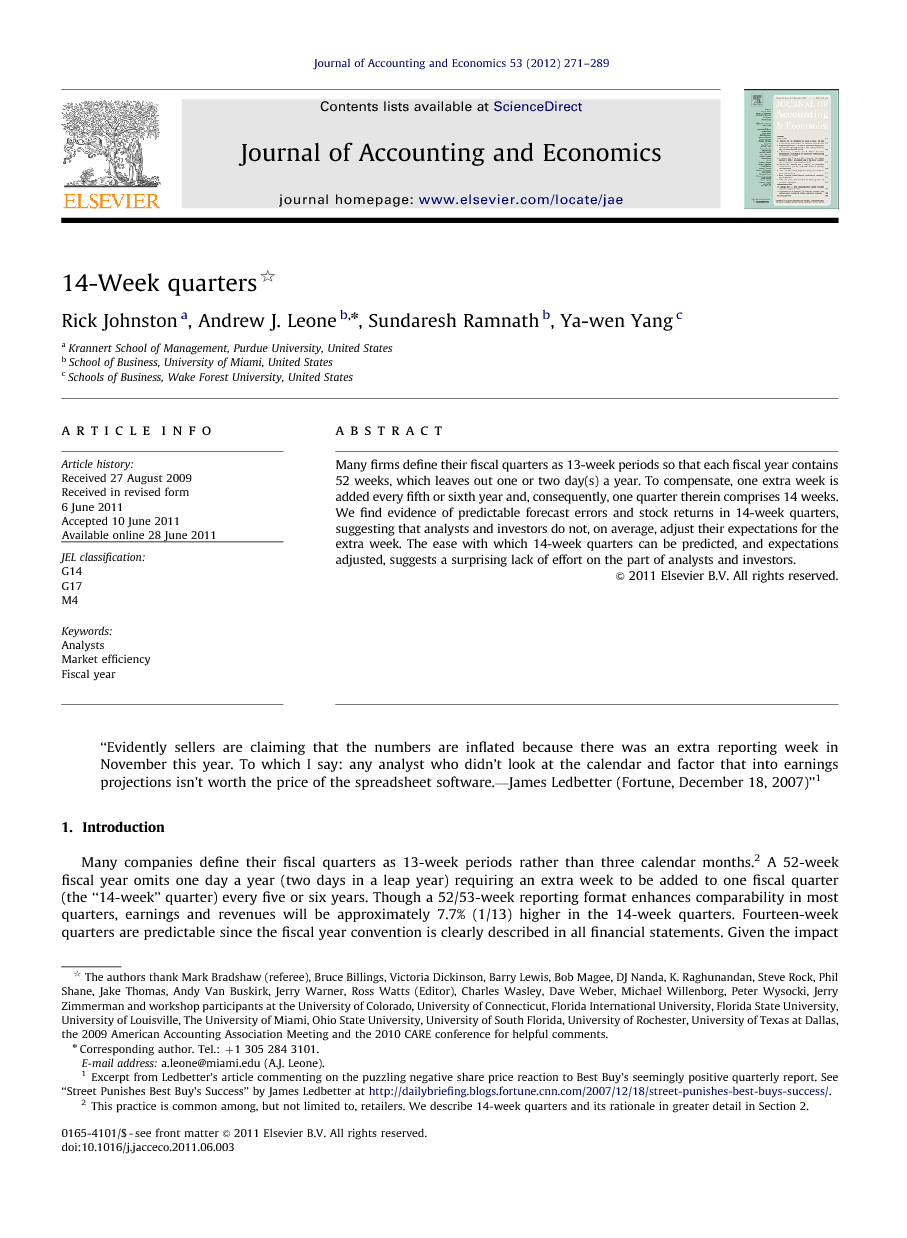 Many firms define their fiscal quarters as 13-week periods so that each fiscal year contains 52 weeks, which leaves out one or two day(s) a year. To compensate, one extra week is added every fifth or sixth year and, consequently, one quarter therein comprises 14 weeks. We find evidence of predictable forecast errors and stock returns in 14-week quarters, suggesting that analysts and investors do not, on average, adjust their expectations for the extra week. The ease with which 14-week quarters can be predicted, and expectations adjusted, suggests a surprising lack of effort on the part of analysts and investors.

In this study we identify an attractive setting to test whether investors and information intermediaries (analysts) fixate on past earnings when forecasting future earnings. In the case of 14-week quarters, we know that a seasonal random walk model is downward biased and we know the magnitude (roughly 1/13) of the bias. Further, the fact that the timing of 14-week quarters is pre-determined gives us confidence that our variable of interest is uncorrelated with other firm performance-based characteristics that might drive our results. Finally, because the forecast correction needed in 14-week quarters is relatively straightforward and predictable (we know when these quarters will occur) any observed fixation is likely due to a lack of effort on the part of the average analyst, or due to limited attention of the marginal investor, as opposed to a lack of ability. Our evidence is consistent with analysts, faced with limited attention and insufficient incentives, ignoring the extra week in 14-week quarters and systematically underestimating both revenues and earnings in those quarters. For the same quarter in the year following a 14-week quarter, analysts again appear to overestimate revenues and, to a lesser extent, earnings, as if they “forget” there was an extra week in the same fiscal quarter of the previous year. In more detailed tests, we find that analysts who disclose their awareness of the extra week in the quarter (approximately one out of four disclose) generally have smaller forecast errors than those who are not aware of the extra week. Stock return tests lead us to similar conclusions about the marginal investor. First, we find that a trading strategy of buying stocks two days after the prior earnings announcement and holding until one day after the earnings announcement for the 14-week quarter, earns abnormal returns of 3.15% per quarter (12.6% annualized). Results of a regression of returns on unexpected revenues and earnings suggest that investors seem to price the “unexpected” earnings related to the extra week, which one would not expect in an efficient market, since such innovations are predictable and will not persist. Our findings add to the discussion on market efficiency. Using methods similar to past research but in a unique research setting, we find evidence consistent with analysts and investors failing to incorporate available information about future revenues and earnings into forecasts and prices. These results are quite surprising in light of the ease with which this information can be obtained and incorporated into expectations. Our evidence suggests opportunities for future research on potential impediments to the rational pricing of past accounting information. For analysts, perhaps there are not sufficient incentives to provide accurate forecasts. For investors, perhaps there are other impediments to arbitrage than those that researchers typically point to (e.g., firm size and inability to short). What is peculiar about our setting is that the returns are in the long-position, which eliminates many of the traditional concerns about implementability, but perhaps other impediments exist.