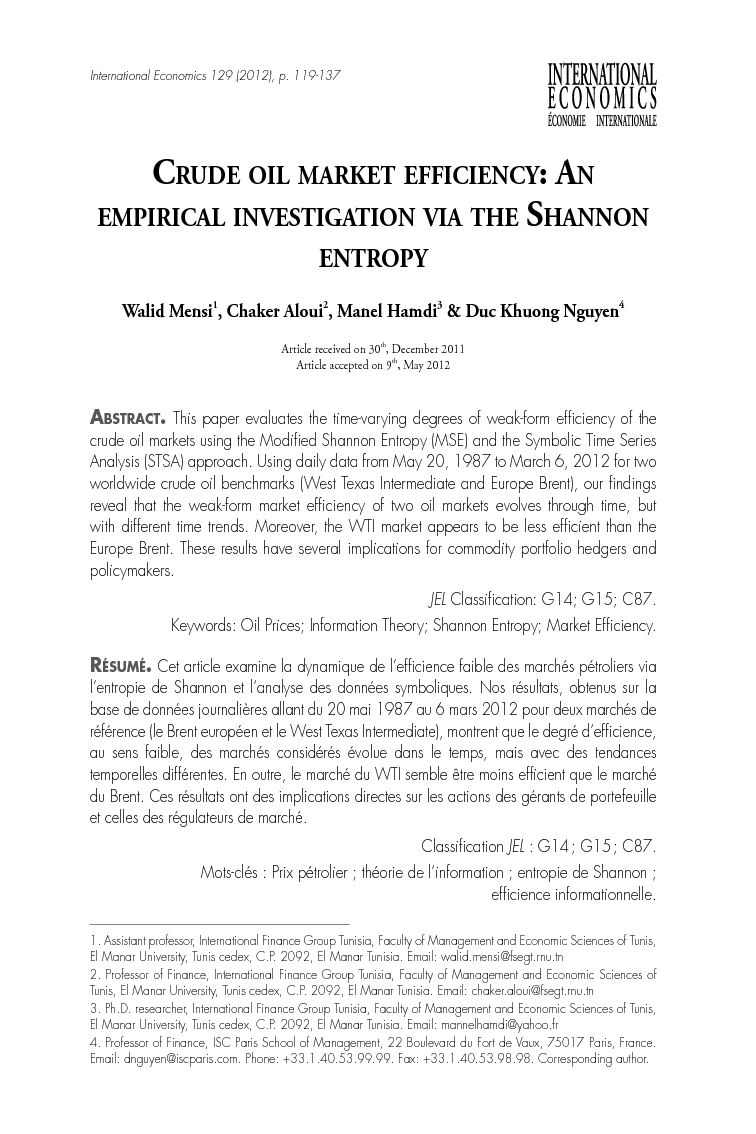 This paper evaluates the time-varying degrees of weak-form efficiency of the crude oil markets using the Modified Shannon Entropy (MSE) and the Symbolic Time Series Analysis (STSA) approach. Using daily data from May 20, 1987 to March 6, 2012 for two worldwide crude oil benchmarks (West Texas Intermediate and Europe Brent), our findings reveal that the weak-form market efficiency of two oil markets evolves through time, but with different time trends. Moreover, the WTI market appears to be less efficient than the Europe Brent. These results have several implications for commodity portfolio hedgers and policymakers.

Crude oil plays a fundamental role in the world economy as it is a decisive determinant of economic growth. According to the International Energy Agency (IEA) 2009 report, oil represents 36% of the world's total primary energy, 95% of all the energy used for transportation, from 1.5% to 2% of the world GDP, and from 6% to 8% of the world trade volume. It also serves as benchmark for the pricing of numerous financial instruments including futures contracts, options, and other oil-related products. Thus, understanding the price behavior in the crude oil markets, which are characterized by high volatility levels and strong upward drifts over the last decade, is essential to both investors and policymakers.5 This volatile pattern can be explained by a number of factors including, among others, the law of supply and demand (Hagen, 1994; Stevens, 1995), and irregulars past/present/future events related to weather, stock market conditions, economic growth, political aspects, and investors' psychological expectations (Yu et al., 2008). Other unforeseen events such as wars, embargoes and revolutions have also substantial influences on oil prices (Tabak and Cajueiro, 2007). The combined effect of these events, which can be either bad or good news or both, may lead crude oil prices to fluctuate without relation to its fundamental value. All in all, the degree of informational efficiency of crude oil markets may be affected and exhibit time-varying nature. In theory, a market is efficient if all available and relevant information is immediately reflected in the asset prices. This information is defined as anything that may affect asset prices so that they become unknowable in the present and random in the future. As a result, in a perfectly efficient market price forecasts are impossible since there are no accurate patterns to asset prices and the best is the random process. Also, no one can take advantage of the available information to generate abnormal profits. Given its important implications for market regulation issues, asset pricing, and portfolio allocation, the efficient market hypothesis (EMH hereafter) has been extensively examined by a large body of literature following the seminal works of Fama (1970, 1991), but the focus is mostly on stock, bond and foreign exchange markets. To date, the question of whether crude oil markets behave efficiently has been examined by only a few studies. Green and Mork (1991) firstly discuss the issue of crude oil market efficiency by testing whether the price of a futures contract on crude oil is an efficient predictor of the ex-post spot price at the time of merchandise delivery, given that all the relevant information was available at the time when the contract was set up. Using the generalized method of moments, they find evidence of predictability in oil prices for the whole sample period 1978–1985. 6 But, when sub-sample periods are used, the results indicate the improvements of market efficiency as the amount of predictability tends to reduce over time. In a more recent research, Maslyuk and Smyth (2008) examine the weak-form efficient market hypothesis (WFEMH) of crude oil markets based on Lagrange multiplier unit root tests with one and two endogenous structural breaks. Using weekly spot and futures prices of WTI (West Texas Intermediate) and Europe Brent crude oils over the period from January 1991 to December 2004, the authors find that each of the crude oil spot and futures price series can be characterized as a random walk process and thus are unpredictable from historical price data. These findings lead Maslyuk and Smyth (2008) to conclude in favor of a weakly efficient behavior of crude oil markets considered. Charles and Darné (2009) also investigate the weak-form efficiency of two crude oil markets (WTI and Brent) by testing the random walk hypothesis for these markets over the period from June 1982 to July 2008. Specifically, Charles and Darné (2009) employ a non-parametric variance ratio tests suggested by Wright (2000) as well as the wild-bootstrap variance tests developed by Kim (2006). Using daily closing spot prices for the crude oil markets under consideration, the authors show evidence that the Europe Brent crude oil market behaves in accordance with weak-form market efficiency, whereas the WTI crude oil market seems to be inefficient over the sub-period 1994–2008. Finally, Lee and Lee (2009) test the WFEMH using annual real data of total energy prices, and four other disaggregated energy prices (coal, oil, gas and electricity) for OCDE countries over the period 1978-2006. Based on panel data stationarity tests which allow for sudden shifts in both level and slope, they find evidence against the weak-form efficiency for all energy prices, including oil prices.

A vast literature has documented the importance of the efficiency market hypothesis with respect to the actions of both investors and policymakers. In this paper we shift our focus to the examination of the efficiency hypothesis in the crude oil markets by adopting a new approach which combines the Symbolic Time Series Analysis with the Shannon entropy. Using daily oil returns for WTI and Brent crude oil indices, we find that the efficiency degree of both crude oil markets varies through time, but the Brent market is more efficient than the WTI index according to Fama (1970, 1991)'s weak-form efficiency. Our trend analysis also shows evidence of market-specific evolution of weak-form efficiency over time. Our conclusions have several practical implications for commodity portfolio management, forecasting crude oil market volatility shocks, and hedging crude oil market risks. That is, over the periods with higher degree of market efficiency, the crude oil prices can be reasonably viewed as accurate signals for capital allocation and pricing of oil-related products and derivatives instruments. Individual and professional investors managing global portfolios with exposure to oil price risk may believe that their funds are directed to the most productive uses. Further, a strategy of randomly diversifying across securities and market sectors with little or no information cost would generate higher benefits than any other strategies relying on larger information set and execution costs. Inversely, the periods of lower market efficiencies, being found to be quite persistent in our study, give rise to exploitable opportunities and significant speculative activities in both spot and futures markets for oil. An investor can, for example, make excess returns by appropriately buying/selling crude oil when its price is below/above the fundamental value.