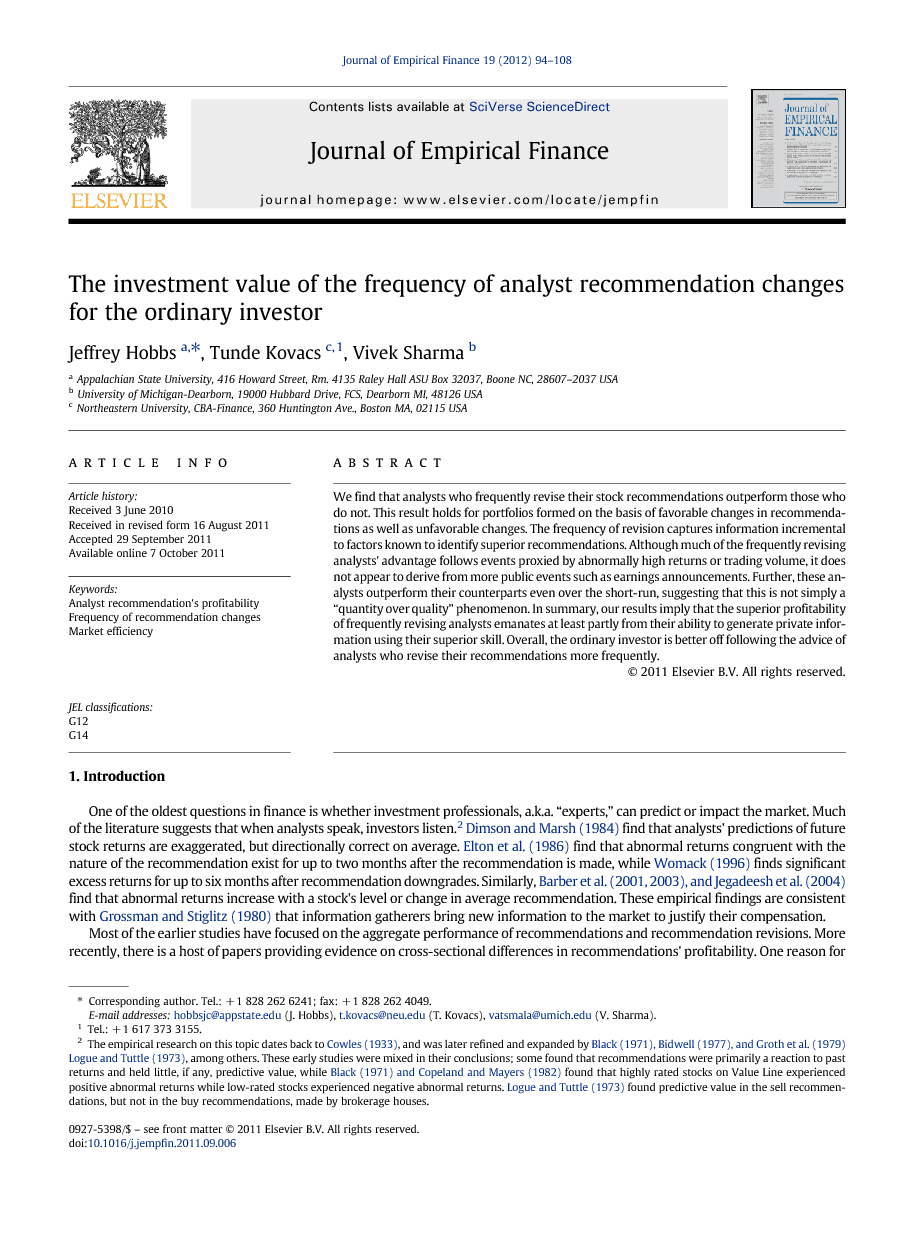 We find that analysts who frequently revise their stock recommendations outperform those who do not. This result holds for portfolios formed on the basis of favorable changes in recommendations as well as unfavorable changes. The frequency of revision captures information incremental to factors known to identify superior recommendations. Although much of the frequently revising analysts' advantage follows events proxied by abnormally high returns or trading volume, it does not appear to derive from more public events such as earnings announcements. Further, these analysts outperform their counterparts even over the short-run, suggesting that this is not simply a “quantity over quality” phenomenon. In summary, our results imply that the superior profitability of frequently revising analysts emanates at least partly from their ability to generate private information using their superior skill. Overall, the ordinary investor is better off following the advice of analysts who revise their recommendations more frequently.

Several studies document that the positive excess return subsequent to analyst recommendations (e.g. Womack, 1996, Logue and Tuttle, 1973 and Dimson and Marsh, 1984) is driven by analysts with certain characteristics. Consistent with the empirical literature, we find positive “alphas” subsequent to analyst recommendations, but we also find that the analysts who most frequently change their recommendations are the ones with the highest excess returns. We conduct several robustness tests and show that our results are not subsumed by characteristics that are known to predict performance, such as analyst independence, experience, star status, past profitability, the number of stocks covered, or whether a recommendation is accompanied by an earnings forecast. Thus it appears that analysts in our first quintile are simply able to identify mispriced stocks more often. These robustness results suggest that the frequency of recommendation revisions captures incremental information ignored by current factors known to help identify superior analyst recommendations. Additionally, we conduct further analysis to explore the source of frequently revising analysts' abnormal return advantage. We find that most, if not all, of this advantage is concentrated in recommendations that do not occur after earnings announcements. We then look to see whether frequently revising analysts respond more quickly to other types of information events proxied by large stock price changes and trading volume. We find that first-quintile analysts not only are significantly quicker to respond to this type of investor behavior, but that their profits relative to the fifth quintile are also much higher. Last, we shorten the holding period for all stocks in our portfolios to a maximum of two months and find that the results remain largely unchanged. Our results suggest that analysts who revise their recommendations more frequently are more responsive to the market and do not derive their advantage from firms' earnings reports. A significant part of their overall advantage lies in those revisions that follow unusual market activity. Additionally, their higher abnormal returns do not appear to be a result of simply having made more revisions. Our results are consistent with the hypothesis that at least part of the superior profitability of frequently revising analysts could be attributed to their superior skill in uncovering private information. We conclude that investors are better off, both in the short-run and in the long-run, following the advice of analysts who make revisions more frequently.