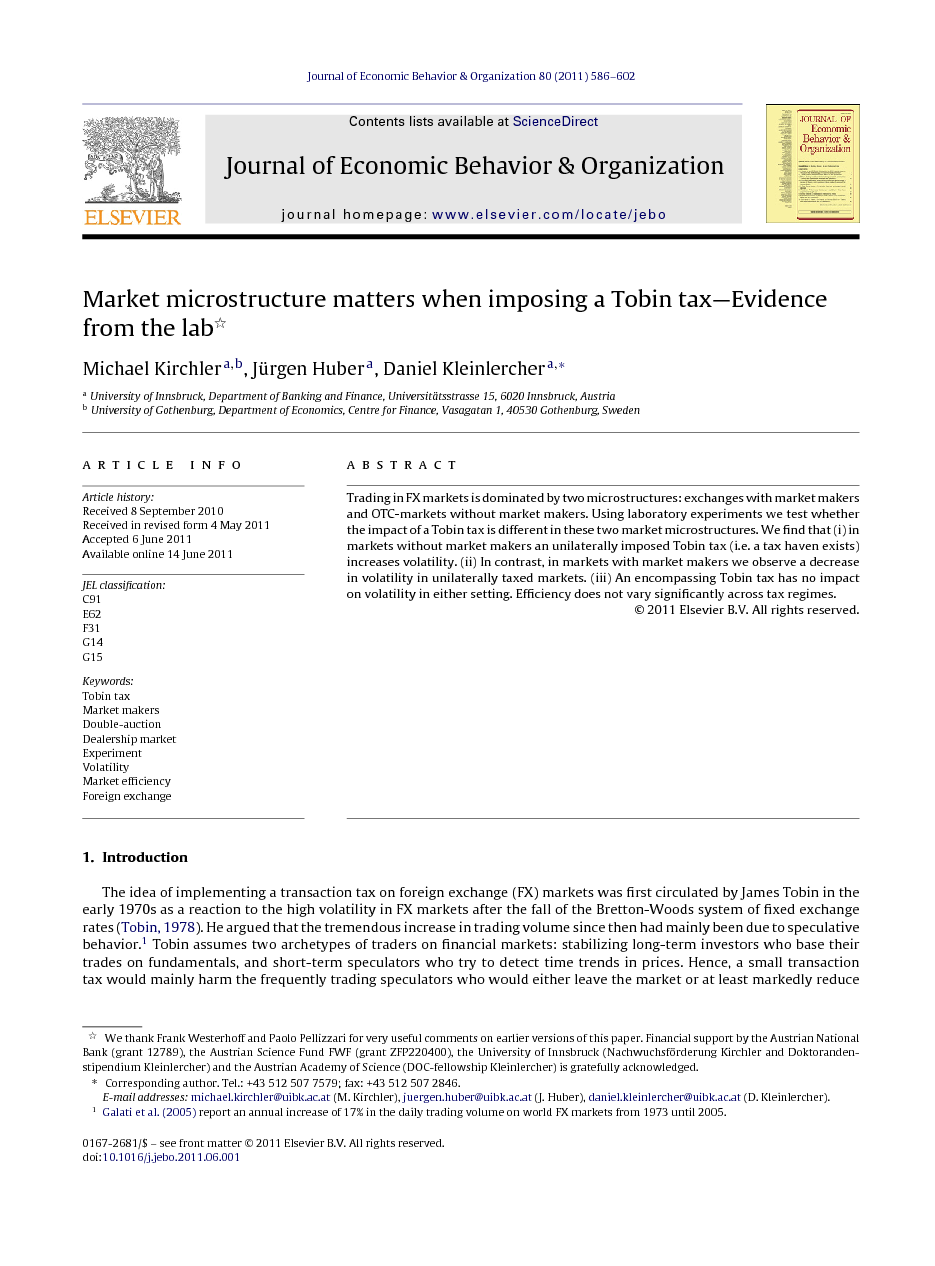 The idea of implementing a transaction tax on foreign exchange (FX) markets was first circulated by James Tobin in the early 1970s as a reaction to the high volatility in FX markets after the fall of the Bretton-Woods system of fixed exchange rates (Tobin, 1978). He argued that the tremendous increase in trading volume since then had mainly been due to speculative behavior.1 Tobin assumes two archetypes of traders on financial markets: stabilizing long-term investors who base their trades on fundamentals, and short-term speculators who try to detect time trends in prices. Hence, a small transaction tax would mainly harm the frequently trading speculators who would either leave the market or at least markedly reduce their trading volume. Consequently, this would lead to a decrease in volatility and to an increase in market efficiency, while potential tax revenues are a “side effect” for Tobin.2 The attitude on the last point has changed in the past few years, at least among politicians, as during the financial crisis 2007–2009 the idea of a Tobin tax has become very popular among them. The tax seems to target “evil speculators” and promises substantial tax revenues which do not have to be paid (directly) by the “normal” tax payer/voter. Scientific research on the impact of a Tobin tax has started mainly in the 1990s with studies on the more general issue of how transaction taxes affect financial markets.3 There is broad consensus in the literature on some “trivial” issues such as negative effects of a Tobin tax on trading volume and market shares of taxed markets (compared to untaxed markets, i.e. tax havens).4 While the direction of the volume effects seems to be clear, other issues, especially the impact of a Tobin tax on volatility and on market efficiency, are still hotly debated, with strong academic backers for both sides. Parts of the controversy regarding volatility are likely due to different methodological approaches and different model assumptions: the main body of literature supporting the hypothesis of Tobin relies on agent-based models,5 while studies opposing the hypothesis of Tobin are mainly empirical, but suffer from the problem that they can only infer the impact of transaction taxes indirectly, since a Tobin tax has not yet been implemented.6 One common feature of all the papers mentioned so far is that the market microstructure has been ignored. This paper is an attempt to close this research gap. Currently, global trading in foreign exchange is dominated by two market microstructures: part of global volume is handled by exchanges where market makers ensure permanent liquidity provision.7 An even larger share of global volume is traded OTC (over-the-counter) between individual parties without market makers.8 The only paper to directly address the important market microstructure issues with respect to a Tobin tax is by Pellizzari and Westerhoff (2009). They use an agent-based model with the chartist/fundamentalist approach and explore the effect of a Tobin tax in different market microstructures, namely dealership and double-auction markets. They report that liquidity decreases in reaction to the imposition of a Tobin tax in a double-auction market and thus a given market order has a stronger price impact. As a consequence the imposition of a Tobin tax does not decrease price volatility, since the stabilizing effect of a reduction in speculative orders and the destabilizing effect of an increased price impact of orders due to lowered liquidity offset each other. By implementing a dealership-market with artificial market makers providing constant liquidity provision, they find that the introduction of a Tobin tax reduces volatility in dealership markets as speculation is reduced. Thus, a Tobin tax has different effects, depending on the market microstructure.9 Our paper can be understood as a cross-test of agent-based models and laboratory experiments, as we base our research question on and compare our results to Pellizzari and Westerhoff (2009). We implement two important alterations to their setup by (i) conducting laboratory markets with real humans interacting, and by (ii) implementing trade on two markets (for the same currency pair) simultaneously, thereby allowing for tax havens. For the experiment we build on and extend the setup in Hanke et al. (2010). In particular, we compare the impact of a Tobin tax under different market microstructures in laboratory markets: in Treatment OTC no market makers are present and thus each human trader can post limit and market orders. Hence, liquidity evolves endogenously through the actions of the human traders. In Treatment MM computerized market makers constantly post limit orders irrespective of the tax regime and thus keep liquidity provision constant. We observe very strong and significant differences in the effects of a Tobin tax under different market microstructures: (i) in markets without market makers (Treatment OTC) an unilaterally imposed Tobin tax (i.e. a tax haven exists) increases volatility. (ii) In contrast, in markets with market makers (Treatment MM) an unilaterally imposed Tobin tax decreases volatility, while (iii) an encompassing Tobin tax has no impact on volatility in either setting. We do not find any significant differences in market efficiency across tax regimes, as all markets are fairly efficient. The paper is organized as follows: In Section 2 we present the market model and experimental design. Sections 3 and 4 report the econometric model and the results, respectively. Finally, Section 5 concludes the paper by relating our results to previous studies and by discussing the practical implications of our results.

We examined the effect the introduction of a Tobin tax had in laboratory markets which were set up either as OTC-markets or as dealership markets where computerized market makers (MM) provided limit orders and thus liquidity provision irrespective of the tax regime applied. The main findings of the paper are on the controversial issue of volatility: (i) in markets without market makers an unilaterally imposed Tobin tax increased volatility. (ii) In contrast, in markets with market makers an unilaterally imposed Tobin tax decreased volatility, while (iii) an encompassing Tobin tax had no impact on volatility in either setting. In particular, the mechanisms of the results were mainly due to different flows of liquidity in both treatments: in markets of Treatment OTC an unilaterally introduced Tobin tax decreased trading volume and the number of limit orders significantly, leading to lower orderbook liquidity, an increased price impact of market orders and thus higher volatility. By contrast, in unilaterally taxed markets in Treatment MM subjects traded less as well. In combination with the constant order flow provided by the computerized market makers, this lead to highly liquid orderbooks, a decrease in the price impact of market orders and thus lower volatility. At the same time volatility increased in the tax haven due to increased trading activity in combination with a constant level of liquidity provision. Trading volume decreased much less than in markets with an unilateral Tobin tax and hence tax revenues were substantial. Thus, from the perspective of volatility, Treatment OTC stands in contrast to the hypothesis of Tobin and supports most empirical studies on transaction taxes (e.g. Aliber et al., 2003, Habermeier and Kirilenko, 2003 and Hau, 2006). Instead, Treatment MM is in line with Tobin's conjectures and supports many agent-based studies on transaction taxes (e.g. Frankel, 1996, Westerhoff, 2003, Ehrenstein et al., 2005 and Westerhoff and Dieci, 2006). We also report similar, mostly even more pronounced effects compared to Pellizzari and Westerhoff (2009). The most likely reason for the less pronounced results in their double-auction setting is that they do not allow for tax avoidance by implementing only one market. As agents cannot shift volume to another market, their “liquidity effect” is probably weaker and hence volatility remains almost unaffected. Thus, following the results of Pellizzari and Westerhoff (2009) and our findings, future research on the Tobin tax should take into account the strong impact of market microstructure, especially for volatility. When trying to relate our results to real FX markets, we have to acknowledge the limitations of our laboratory markets, as especially Treatment MM was set up with very basic computerized market makers. Also, as with any experimental study, the size of the data-set is limited and we have to keep in mind that we operate in stylized markets. However, if even such simple markets where few subjects with comparatively low incentives trade deliver strong and robust results (e.g. strong tax avoidance, increased volatility in humans-only-markets), we are confident that these results translate well to larger markets where the stakes are much higher and subjects thus more eager to find “optimal” responses to tax regime changes. Thus, we think the results are clear and robust enough to state that (i) markets with market makers (MM) could lead to the desired outcome of Tobin (i.e. lower volatility as high-frequency traders trade less than before) when it can be assured that liquidity provision is hardly affected by the tax. This finding is remarkable as it would be beneficial for governments to impose a Tobin tax on such markets even without international coordination, since an unilateral imposition lowers volatility without affecting efficiency. Furthermore, (ii) no matter which microstructure is applied, an encompassing Tobin tax would not increase volatility or affect efficiency and would raise substantial tax revenues if introduced on all major markets.