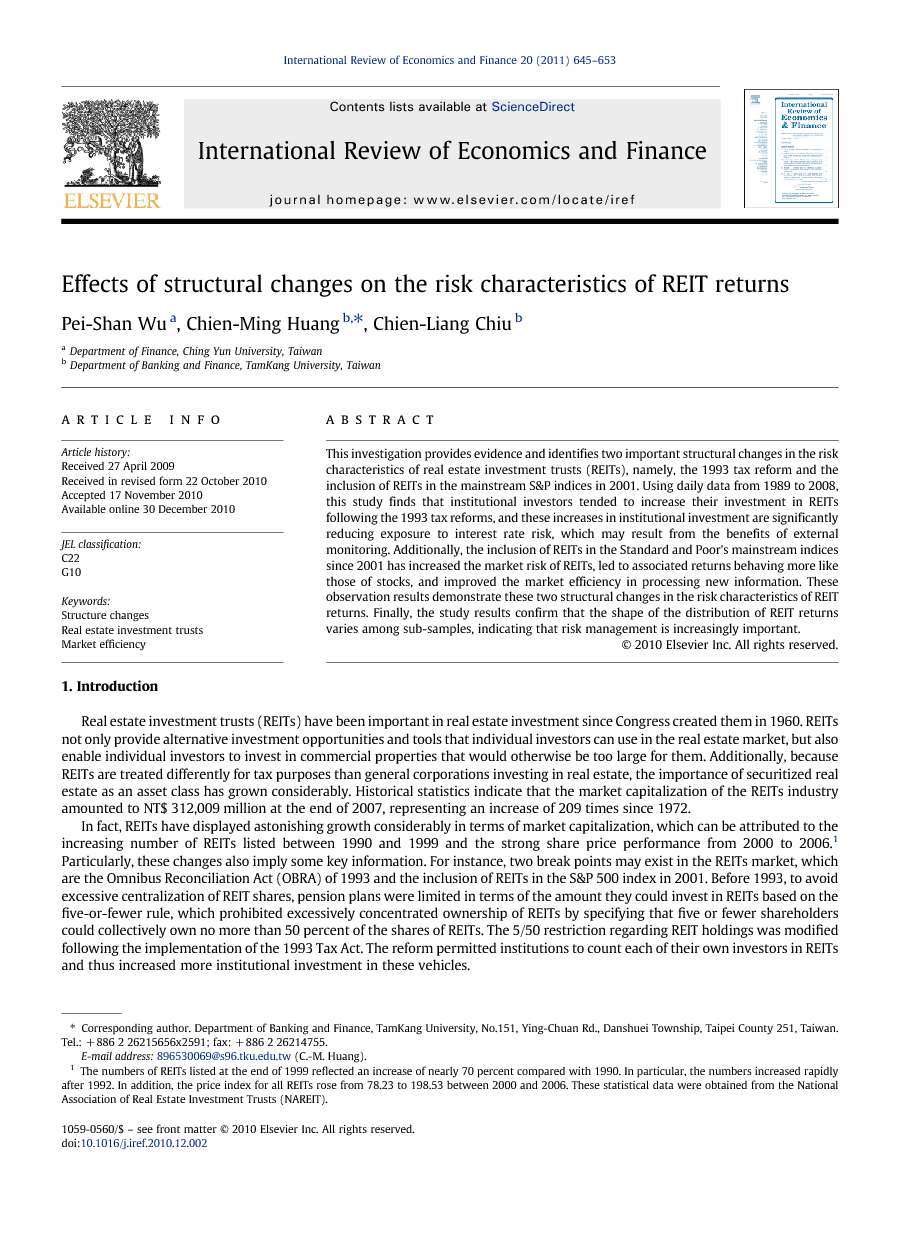 This investigation provides evidence and identifies two important structural changes in the risk characteristics of real estate investment trusts (REITs), namely, the 1993 tax reform and the inclusion of REITs in the mainstream S&P indices in 2001. Using daily data from 1989 to 2008, this study finds that institutional investors tended to increase their investment in REITs following the 1993 tax reforms, and these increases in institutional investment are significantly reducing exposure to interest rate risk, which may result from the benefits of external monitoring. Additionally, the inclusion of REITs in the Standard and Poor's mainstream indices since 2001 has increased the market risk of REITs, led to associated returns behaving more like those of stocks, and improved the market efficiency in processing new information. These observation results demonstrate these two structural changes in the risk characteristics of REIT returns. Finally, the study results confirm that the shape of the distribution of REIT returns varies among sub-samples, indicating that risk management is increasingly important.

This study examined the risk characteristics of REIT returns and investigated whether the risk factors exhibited significant changes after considering significant structural changes. The primary aim was to clarify the following: what are influences of the 1993 TRA on the risk characteristics of REIT returns? What are the major risk factors associated with REIT returns after their inclusion in the mainstream benchmark index, and what is the property non-normal distributions of the error terms? The empirical results reveal important structural changes in the risk characteristics of REIT returns. The evidence suggests that the 1993 TAR has caused institutional investors to invest more in the REITs market, thus increasing the monitoring of REIT value, decreasing risk exposure in the bond and stock markets, and slowing the response of REIT returns to new market information. One possible explanation for the phenomenon is the largest factor in encouraging the growth of the sector and the large number of IPOs following 1993. The loose policy surrounding the 5/50 rule also implies that market makers may strongly influence prices and also accelerate the development of the REITs industry. Therefore, these factors may reduce market efficiency, thus negatively impacting relationships between the REITs market and other asset classes. However, because REITs have been included in the mainstream S&P indices since 2001, the relationships between REITs and other capital markets have given rise to significant changes. This observation has some important implications. One implication is that the role of the equity market is extremely important. Owing to increasingly diverse investors and increased trading, the REITs sector became more efficient in terms of new information processing and thus came to increasingly resemble the stock market. That is, REITs behaved increasingly like common stocks. Another intention is that market sentiment is becoming more and more volatile, indicating that increases in daily trading have changed the daily volatility patterns of REIT returns. Assuming rational investors and an efficient market, REIT prices will effectively reflect the uncertain risk associated with increased interest rate volatility. Finally, the study results also confirm the importance of environmental change. From the estimations of the returns distributions, distribution types vary owing to significant kurtosis and the presence of fat tails in the two sub-samples. The assumption of normality thus is problematic in analyzing financial data. The result also suggests that investors should adopt more complex hedging strategies, and that risk management is crucial for reducing equity market risk. Consequently, the modeling of a non-normal distribution may help investors solve the potential problems associated with measuring error arising from market risk.