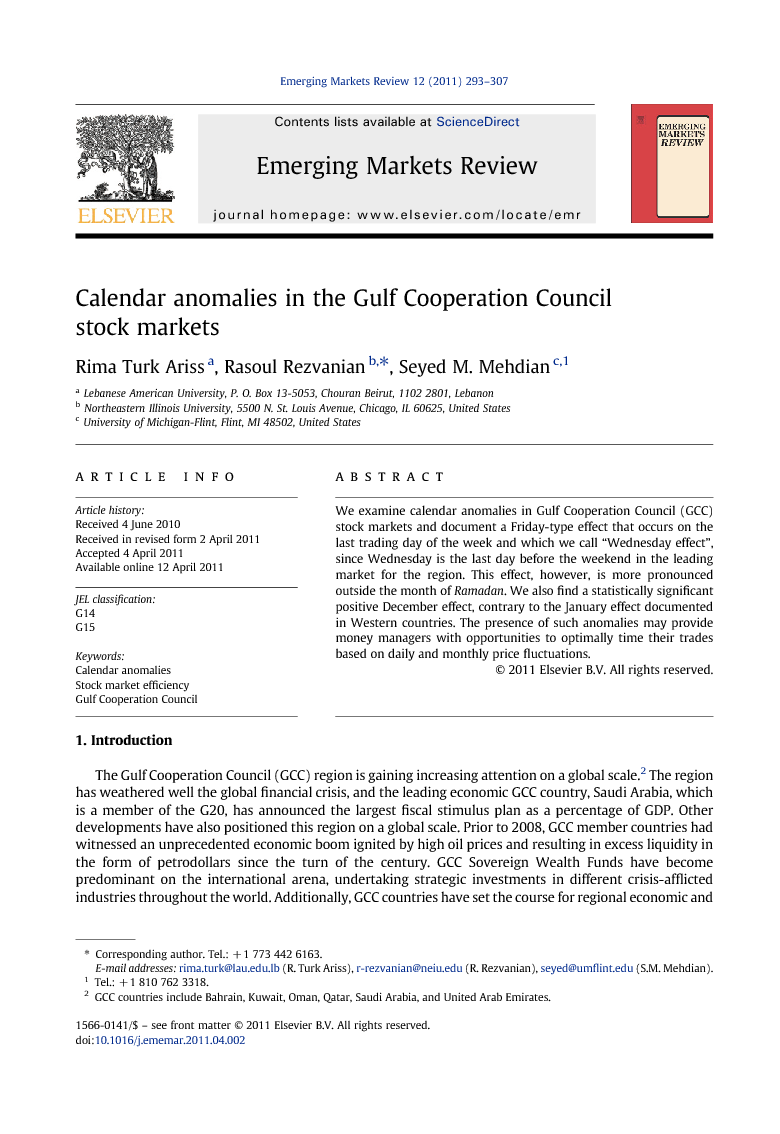 We examine calendar anomalies in Gulf Cooperation Council (GCC) stock markets and document a Friday-type effect that occurs on the last trading day of the week and which we call “Wednesday effect”, since Wednesday is the last day before the weekend in the leading market for the region. This effect, however, is more pronounced outside the month of Ramadan. We also find a statistically significant positive December effect, contrary to the January effect documented in Western countries. The presence of such anomalies may provide money managers with opportunities to optimally time their trades based on daily and monthly price fluctuations.

The GCC region is receiving increased attention from international investors, not only due to the excess of liquidity from petrodollars and ensuing economic growth, but also because of greater resilience that these countries have so far shown to the global financial crisis compared to other economies. In this paper, we argue that GCC stock markets have certain specificities that render previously reported calendar anomalies for other markets not applicable. The scant earlier work investigates individual GCC countries separately, reports declining volatility during the month of Ramadan, and does not find calendar anomalies similar to those documented for other stock markets. We find that returns are positive and significant on the last trading day of the week, in line with the literature for Western markets. This calendar anomaly, however, does not occur on Fridays, but rather on Wednesdays, and it is more pronounced during non-Ramadan days. We attribute this outcome to investors' buying mood right before the weekend begins in an environment where short selling is not allowed and trading in derivatives is not available. The investors' mood hypothesis may also explain the significant positive December effect that we find across GCC stock markets. While we do not find any significant difference in returns across the Hijri lunar calendar months, we note that the volatility of returns is significantly reduced during the month of Ramadan. This behavior coincides with the fact that economic activity generally slows down during Ramadan, and that trading in securities and speculation are also considerably reduced. Overall, our results provide evidence to suggest that, similar to international markets, calendar anomalies prevail in GCC stock markets. This outcome may be due to a number of factors such as relatively inactive markets, low volume of trading and liquidity, and perhaps the presence of few sophisticated investors so that possible intra week arbitrage opportunities are totally exploited. It could be that active investment strategies might generate abnormal returns in these markets. However, this opportunity may be restricted to GCC nationals only, since there are still some resilient regulatory restrictions on stock ownership by non-GCC investors in those markets.