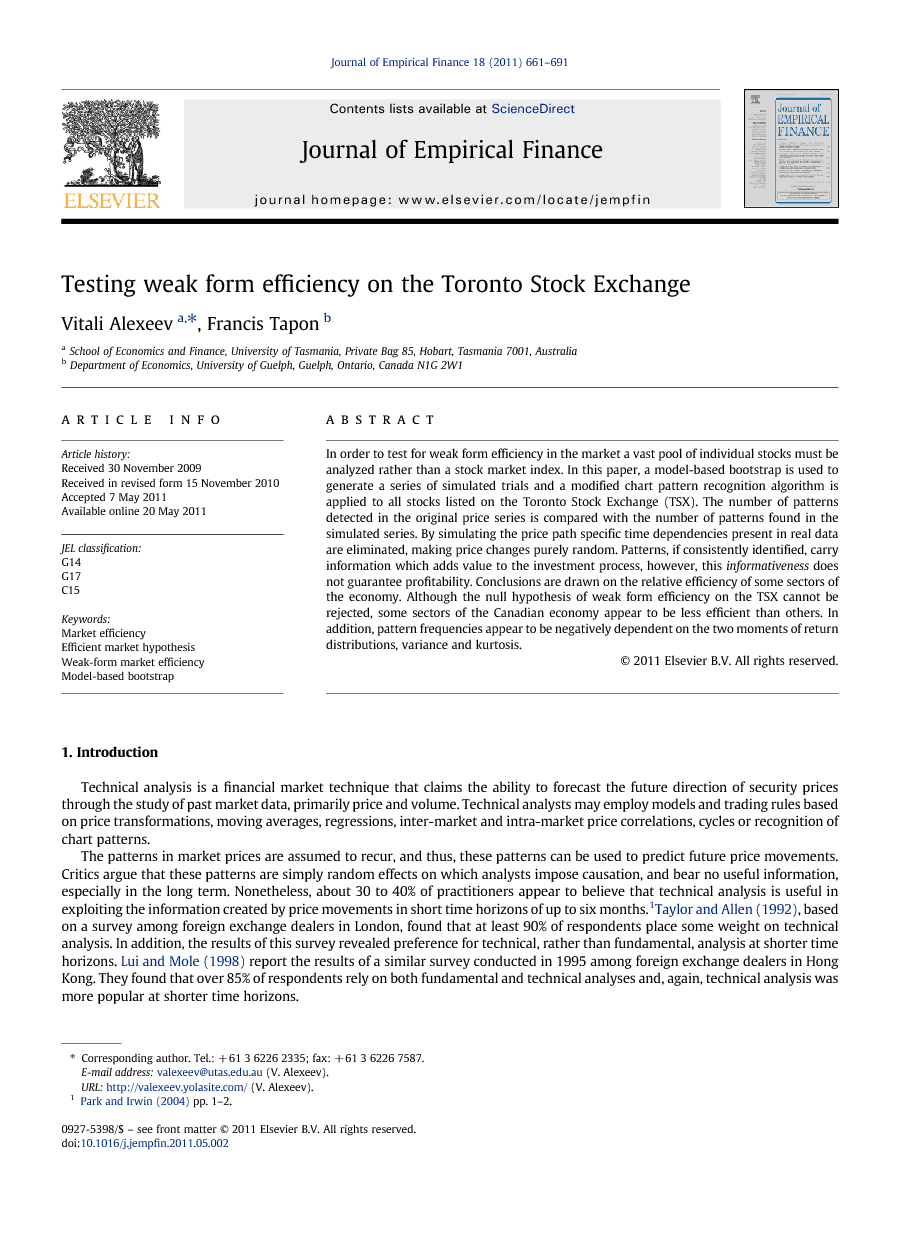 In order to test for weak form efficiency in the market a vast pool of individual stocks must be analyzed rather than a stock market index. In this paper, a model-based bootstrap is used to generate a series of simulated trials and a modified chart pattern recognition algorithm is applied to all stocks listed on the Toronto Stock Exchange (TSX). The number of patterns detected in the original price series is compared with the number of patterns found in the simulated series. By simulating the price path specific time dependencies present in real data are eliminated, making price changes purely random. Patterns, if consistently identified, carry information which adds value to the investment process, however, this informativeness does not guarantee profitability. Conclusions are drawn on the relative efficiency of some sectors of the economy. Although the null hypothesis of weak form efficiency on the TSX cannot be rejected, some sectors of the Canadian economy appear to be less efficient than others. In addition, pattern frequencies appear to be negatively dependent on the two moments of return distributions, variance and kurtosis.

Adding to the work of Lo et al. (2000) for the US and Dawson and Steeley (2003) for the UK, we use Canadian stock market data to compare the number of ten well-known technical reversal patterns identified in the market data with the number of patterns found in the simulated price paths obtained from two null models, random walk and EGARCH. We simulate a range of price paths for each of the stocks to carry out statistical inference and determine the statistical significance of our results. Table 11 summarizes the results and shows the proportion of stocks with significantly greater number of patterns identified in the real data than in the simulated data with two null models. The results we obtain using the random walk model are quite different from those obtained with EGARCH: with random walk over the period 1980–2010, for example, we find that 42% of All stocks have HS patterns; 40% has IHS. However, for the same period the subgroup All stocks under EGARCH we detect only 6% of stocks as having HS and IHS patterns. Although, we fail to reject the null hypothesis of weak form efficiency on the TSX, some sectors of the Canadian economy appear to be less efficient than others. A further breakdown of data into subperiods and subsequent analysis of each of these periods leads us to the same conclusion. 20 The data we collected on the number of reversal patterns identified through a pattern recognition algorithm were aggregated over all 30 years. However, over this period, economic conditions as well as the technological advances which enable today's markets to share information instantly and across several trading floors have changed. On April 23, 1997, for example, the TSE's trading floor closed, making it the second-largest stock exchange in North America to choose a floorless, electronic (or virtual trading) environment. In 2000, the Toronto Stock Exchange became a for-profit company. These economic and technological events make a natural break point in the sample. Thus, analysis of the market efficiency is more appropriately done over smaller sub-periods.