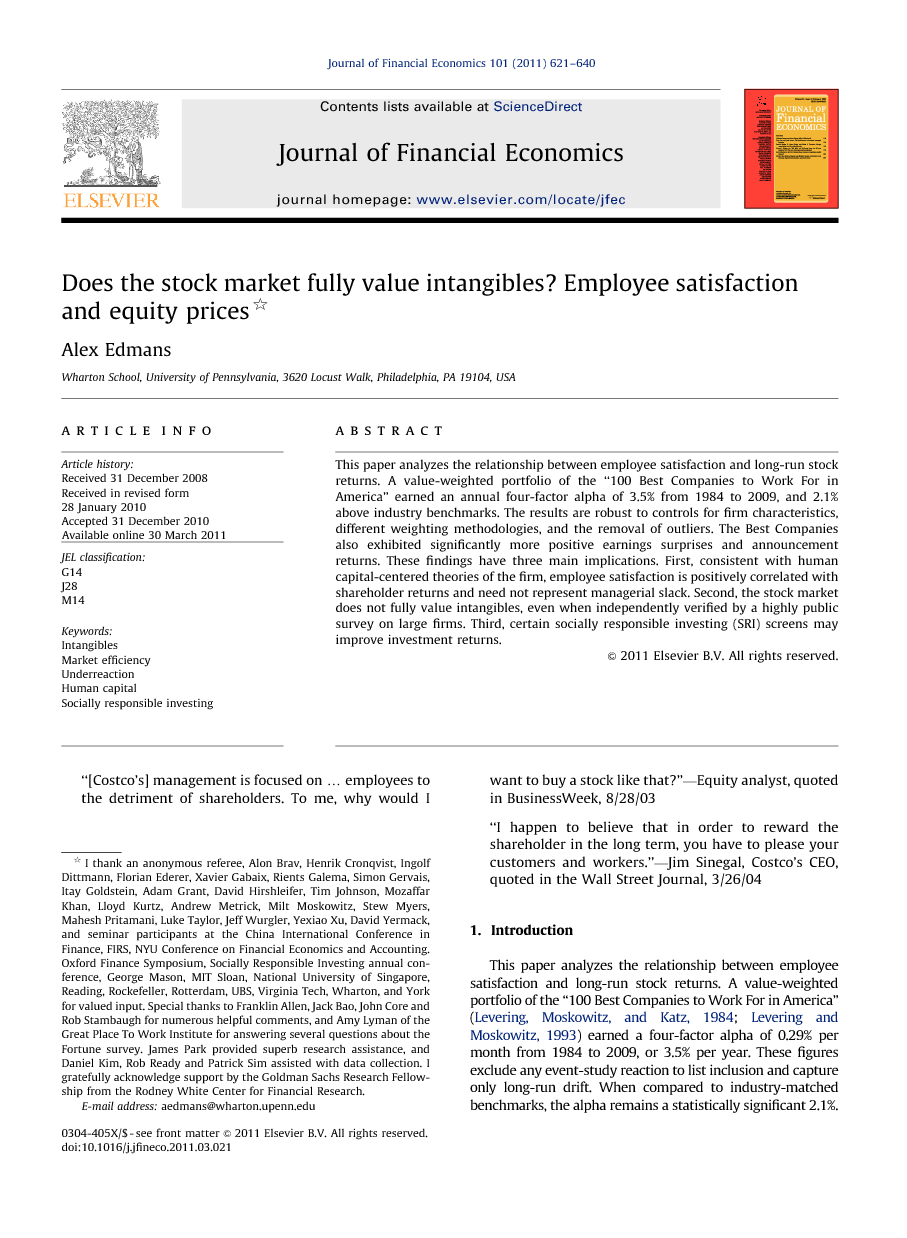 This paper analyzes the relationship between employee satisfaction and long-run stock returns. A value-weighted portfolio of the “100 Best Companies to Work For in America” earned an annual four-factor alpha of 3.5% from 1984 to 2009, and 2.1% above industry benchmarks. The results are robust to controls for firm characteristics, different weighting methodologies, and the removal of outliers. The Best Companies also exhibited significantly more positive earnings surprises and announcement returns. These findings have three main implications. First, consistent with human capital-centered theories of the firm, employee satisfaction is positively correlated with shareholder returns and need not represent managerial slack. Second, the stock market does not fully value intangibles, even when independently verified by a highly public survey on large firms. Third, certain socially responsible investing (SRI) screens may improve investment returns.

This paper finds that firms with high levels of employee satisfaction generate superior long-horizon returns, even when controlling for industries, factor risk, or a broad set of observable characteristics. These findings imply that the market fails to incorporate intangible assets fully into stock valuations—even if the existence of such assets is verified by a widely respected and highly publicized survey on large companies. Instead, an intangible only affects the stock price when it subsequently manifests in tangibles that are valued by the market, such as earnings announcements. This suggests that the non-incorporation of intangibles, shown by prior studies, is not simply due to the lack of salient information on them. It also provides empirical support for managerial myopia theories, which require the assumption that long-run investment is not valued by investors. Even if managers are able to credibly communicate the value of their intangible investment, it may still not affect outsiders' valuations, and so they may be reluctant to invest in the first place. A separate implication is that an SRI screen based on employee welfare may improve investment performance, in contrast to existing views that any SRI screen necessarily reduces investor returns. The results are consistent with human relations theories which argue that employee satisfaction causes stronger corporate performance through improved recruitment, retention, and motivation, and existing studies of underpricing of intangibles and long-run drift to corporate events. However, the study's implications for the future stock performance of firms with superior employee satisfaction is unclear. The main hypothesis for the excess returns found in this paper is that the market believed in the negative or zero relationship predicted by traditional frameworks and shown by existing evidence, and was caught unawares by the changing nature of the firm, which means that employee satisfaction is now beneficial. If the market has now learned of the positive correlation between list inclusion and future returns, one should expect the returns to go down over time. However, if the market does not update (e.g., because intangibles are inherently difficult to incorporate into stock prices) and arbitrage remains limited, the superior returns may persist going forward.