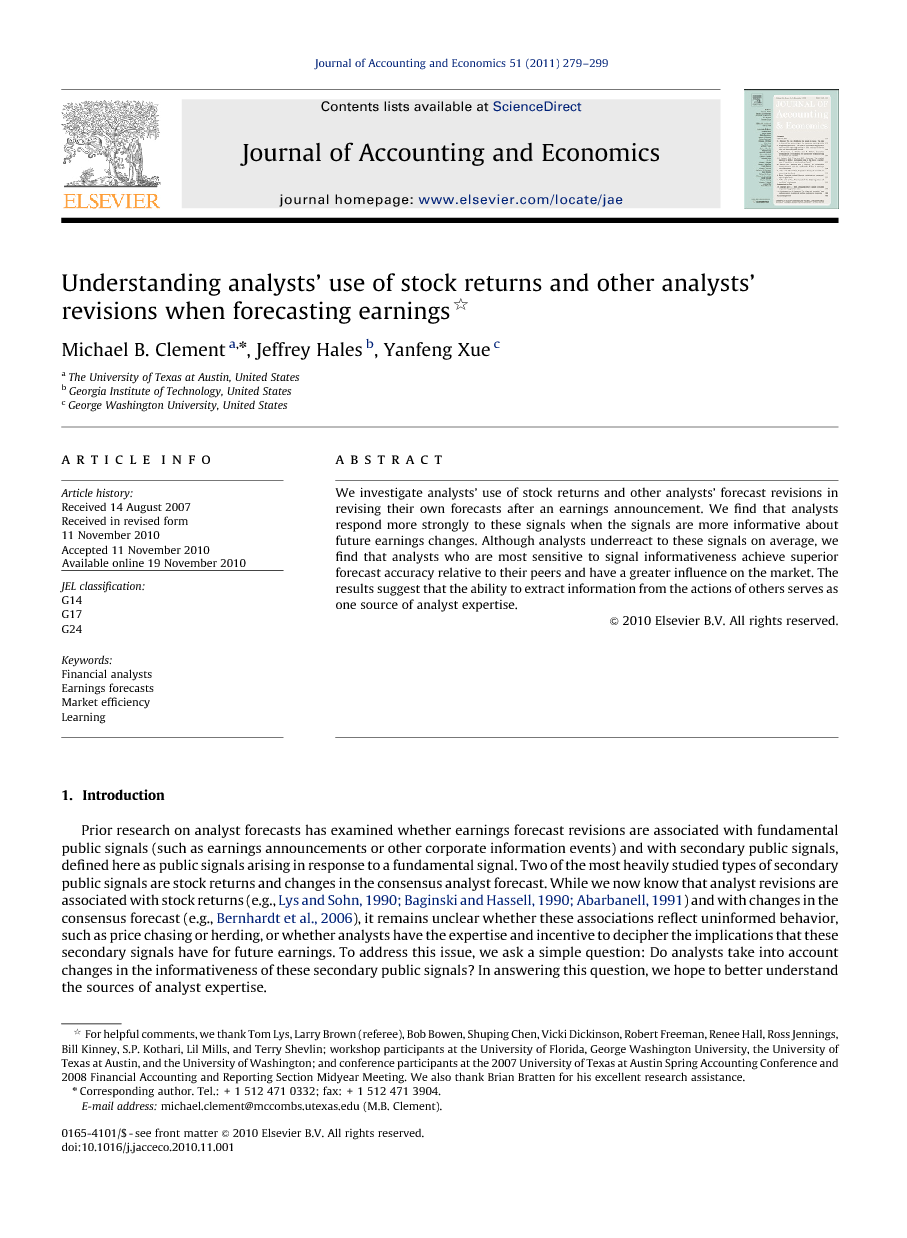 We investigate analysts' use of stock returns and other analysts' forecast revisions in revising their own forecasts after an earnings announcement. We find that analysts respond more strongly to these signals when the signals are more informative about future earnings changes. Although analysts underreact to these signals on average, we find that analysts who are most sensitive to signal informativeness achieve superior forecast accuracy relative to their peers and have a greater influence on the market. The results suggest that the ability to extract information from the actions of others serves as one source of analyst expertise.

We examine financial analysts' ability to extract incremental information about companies' future earnings prospects by observing how investors and other analysts react to earnings announcements. Taken together, our results imply the following: beyond raising or lowering their forecasts of future periods based on their error in forecasting current and prior period earnings, analysts incrementally adjust their earnings forecasts as a function of how the market reacts to the earnings announcement. Analysts appear to be especially sensitive to whether stock returns are likely to be informative of future earnings changes, such as when investor sentiment is close to its historical average. We find that, when analysts have the opportunity to view the revisions of other analysts before issuing their own forecast revision, they extract information about earnings by looking at both the stock returns and the revisions of other analysts, especially when these public signals are more likely to be informative of future earnings. Interestingly, analysts' use of both types of signals reflects a degree of conservatism, such that their increased use of these signals because of changes in expected informativeness is insufficient given the increases in actual informativeness. Thus, the underreactions documented in prior research, rather than being the consequence of analysts' general lack of attention to the actions of others, can more appropriately be interpreted as arising from uncertainty about just how much one ought to rely on these signals at any given point in time. The results with respect to informativeness are important because they shed light on the motives that underlie the associations documented in prior literature. If analysts were unconsciously being influenced by stock returns (e.g., Miller and Sedor, 2006) or artificially inflating their earnings forecasts to pump up certain stocks (price chasing), then we would not expect to see a positive association between revisions and the informativeness of returns. With respect to how analysts respond to their peers, the behavior we document might look like herding (e.g. Sharfstein and Stein, 1990 and Trueman, 1994), especially if the number of analysts contained in the average revision proxies for an analyst's incentive to mimic others. However, it is important to remember that there is information in the actions of others and, if anything, we find that second-mover analysts are not “following the crowd” enough as the crowd gets bigger. We, therefore, conclude that analysts' forecasts are influenced by the actions of investors and other analysts because the analysts are attempting to extract information about future earnings, not just because they have incentives to pump up stock prices or to run with the herd. As such, our study contributes to the literature on analyst forecasts by documenting an important source of analysts' expertise: namely, their ability to extract information from the actions of other capital market participants, including the ability to recognize and respond to changes in these signals' informativeness over time. Moreover, we show analysts are not simply free-riding off of the public opinions of others. Rather, they appear to use their expertise in interpreting this public information to supplement their own private information generation activities, allowing them to issue earnings forecast revisions that are relatively more accurate than their peers. Finally, even though this additional accuracy comes from extracting information from the publicly observable actions of investors and analysts, we provide evidence that (at least for returns) the market values an analyst's ability to impound this information into their forecast revisions. In summary, the results of our study suggest that when responding to public signals analysts may use a broader set of signals, and do so in more sophisticated ways, than previously thought. We believe more research is required to better understand this process.