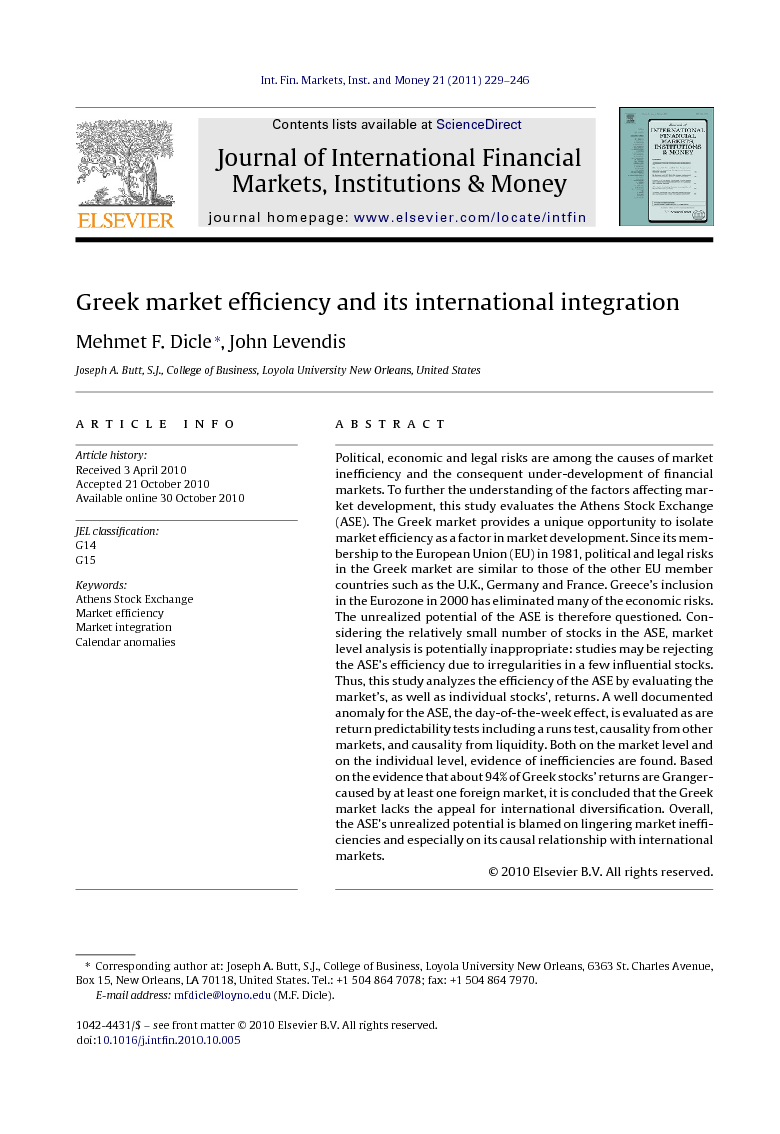 Political, economic and legal risks are among the causes of market inefficiency and the consequent under-development of financial markets. To further the understanding of the factors affecting market development, this study evaluates the Athens Stock Exchange (ASE). The Greek market provides a unique opportunity to isolate market efficiency as a factor in market development. Since its membership to the European Union (EU) in 1981, political and legal risks in the Greek market are similar to those of the other EU member countries such as the U.K., Germany and France. Greece's inclusion in the Eurozone in 2000 has eliminated many of the economic risks. The unrealized potential of the ASE is therefore questioned. Considering the relatively small number of stocks in the ASE, market level analysis is potentially inappropriate: studies may be rejecting the ASE's efficiency due to irregularities in a few influential stocks. Thus, this study analyzes the efficiency of the ASE by evaluating the market's, as well as individual stocks’, returns. A well documented anomaly for the ASE, the day-of-the-week effect, is evaluated as are return predictability tests including a runs test, causality from other markets, and causality from liquidity. Both on the market level and on the individual level, evidence of inefficiencies are found. Based on the evidence that about 94% of Greek stocks’ returns are Granger-caused by at least one foreign market, it is concluded that the Greek market lacks the appeal for international diversification. Overall, the ASE's unrealized potential is blamed on lingering market inefficiencies and especially on its causal relationship with international markets.

The Athens Stock Exchange (ASE) is a relatively small equity market, especially considering the political and monetary institutions in which it operates. Greece has been a member of the EU since 1981. An increasingly large proportion of its business is regulated by the EU. The ASE has a considerable local investor and company base which extends beyond Greece to the boundaries of the EU. The economic, legal and political benefits that the EU offers its members – especially to developing members – are expected to have a positive impact on member countries’ equity markets. More importantly, Greece has been a member of the Eurozone since the year 2000. Since the Euro has a (far) more stable value than the Greek Drachma, international transaction costs are minimized. Stable political and legal systems have been found to have favorable effects on returns and the development of equity markets. For example, La Porta et al., 1997 and La Porta et al., 1998 show the importance of legal systems, and especially the protection of investors’ rights, for equity returns and market growth; Lombardo and Pagano (2000) examined the impact of legal systems on expected equity returns across countries; Erb et al. (1996) report the relationship between level of political risk and equity returns; and Perotti and van Oijen (2001) provide direct evidence of the link between equity market growth and the level of political risk. The ASE is situated in a fertile institutional environment, yet it has not grown as much as one might expect. Why has not it attracted more investors? Is it because it is an inefficient market? We explore various tests of the ASE's efficiency. Does it not offer enough opportunities for diversification? We conduct Granger-causality tests to investigate opportunities for minimizing international investors’ risks. EU membership may have facilitated capital-flight away from the ASE to more efficient markets, further exacerbating the inefficiencies of Greece's equity market. Since the purpose of the study is to evaluate the ASE's efficiency, the analysis starts with the most commonly reported anomaly, the day-of-the-week (DOW) effect. This is followed by a runs test, analyzing patterns of returns, since they may be used to establish successful trading strategies. Considering the importance of liquidity, especially for relatively smaller markets, liquidity is then analyzed for its causal effect on returns. It is argued in the literature (ex: Lessard, 1973 and Errunza, 1983) that equities of developing markets offer important diversification benefits for investors in developed countries. Considering the legal, political and economic stability in Greece after its membership to the EU, the ASE would be expected to offer significant diversification benefits for international investors. This is especially the case for investors within the Eurozone. However, if the ASE is not considered an efficient market, then its appeal to international investors for diversification would be lowered. It would further lose its appeal if its efficiency is questioned on the basis that Greek stocks’ returns are caused by (are predictable by) other markets’ returns. In the final step of the present study, other equity markets’ (50 equity markets in 32 countries) returns are analyzed for their causal effect on the ASE's returns. The ASE may not be considered efficient but it may still offer significant diversification benefits. With this final test, the predictability of returns, and ASE's appeal for international investors, are evaluated. Considering the small number of stocks that the ASE has compared to other markets (i.e. NASDAQ, Shanghai SE, India NSE), market level analysis falls short of comprehensiveness. If there are a few stocks that have highly predictable returns, are highly dependent on other markets, or show return anomalies, then they may impact the overall market's returns. If the number of such stocks is high then their impact may be visible on the equally weighted market returns, and if their market capitalizations are high then their impact may be visible on the value weighted market returns. Studies may be rejecting the ASE's efficiency due to a few influential stocks. For the purpose of robustness and comprehensiveness, the present analysis is performed on the individual stocks traded on the ASE. For the purpose of comparability to previous related literature, market level analysis is also conducted. This study contributes to the existing literature along six dimensions. First, since the Greek market has relatively few stocks and market concentration still seems to be an issue, individual stocks and the overall market are evaluated. Second, the unique nature of the data allows for the calculation of daily returns using close-to-close and open-to-close returns which in turn allows the evaluation of the trading time hypothesis for the DOW effect. Thus, after evaluating the existence of the DOW effect, this study also evaluates whether or not it can be explained. Third, evaluation of the relationship with European and US markets is extended to include 50 equity markets in 32 countries, for each of 328 Greek stocks individually as well as for the overall market.1 Using a Granger causality test, we determine whether individual Greek stocks’ returns can be predicted using other markets’ lagged returns: tests of international integration as well as tests of market efficiency. Fourth, a runs test is employed to test not only the contrarian but also momentum trading strategies. Fifth, considering the importance of liquidity for market development, liquidity is analyzed for its causality to returns. Thus, the market efficiency tests are extended to include return predictability by using liquidity. Finally, stock specific factors (such as size and mean percentage spreads) are evaluated to test whether specific inefficiencies can be attributed to specific types of stocks. In the following section, a brief summary of the literature evaluating the Greek market's efficiency is provided.2 The data and variables are described in the third section. The hypotheses, econometric models and empirical results are provided in the fourth section. Appendix A containing the tables follows the concluding remarks.

The Athens Stock Exchange, as an equity market within the Eurozone, has the potential to develop and attract international investors. Compared to other developing countries, Greece's economic, legal and political environment allows high paced development. This potential however has not been realized yet. The main aim of this study is to evaluate the ASE's market efficiency as a reason for not realizing its growth potential to its fullest extent. As part of market development, the ASE would be expected to become more efficient. However, based on the evidence provided in this study, the efficiency of the ASE is questionable. It is common in the previous market efficiency literature to use market level variables. However, for markets where the number of stocks is limited, use of market averages seems to be problematic in that the impact of a few stocks may be significant on the overall market. Thus, for such markets, individual stock analysis may be needed. It may be argued that even a small percentage of companies with certain anomalies would suffice to deem the overall market as inefficient, but it is likely for equity markets to contain stocks that can be manipulated, that show anomalies, or that have predictable return patterns. This is especially true for developing markets. If however, the total number of stocks is small, the impact of a few stocks may be reflected on the market averages. For this purpose, the evaluation in this study is both on the market and on the individual stock level. Initially, one of the most popular anomalies, the day-of-the-week (DOW) effect, was evaluated. On the market level, Monday effect is still evident. However, at the individual stock level, about 89% of the Greek market is DOW effect free. The tested hypotheses explain any DOW effect for the market and for individual stocks. At the market level, runs are rare and are not statistically significant. At the individual stock level, runs lengths up to six are quite common and statistically significant. Smaller size and lower liquidity increase a stocks’ likelihood of having a run in returns. Considering the importance of liquidity for developing markets, its effect on Greek stocks is evaluated as part of the market efficiency analysis. Accordingly, liquidity is found to be a statistically significant cause of returns for less than 10% of the Greek market which simply means that while liquidity is important it is not the cause for returns for about 90% of the Greek stocks. Finally, the international integration is evaluated through analyzing the causal effect of 50 other equity exchanges around the world on the ASE in general, and on individual Greek stocks in particular. Evidence of international integration is found through 30 foreign markets Granger causing Greek market returns. Overall, the results of this study reveal that a small percentage of the Greek market may be blamed for market level results that may question market efficiency. These are usually smaller and less liquid stocks. Also, while market efficiency is not a major concern if focus is on the majority of the Greek market, international integration prevents stocks traded on Athens Stock Exchange from offering significant diversification benefits. More importantly, these results imply that the level of international integration may be the underlying reason for the ASE not to realize its fullest potential. The competition between the equity markets of the EU poses a threat for equity markets located in smaller EU member economies. European policy makers may have to decide whether to consolidate with equity exchanges in developed partners of the economic unions or to continue with their sovereign equity markets. Investors as well as listed companies may choose other, more efficient markets. For further research to evaluate the impact of accession to economic unions on equity market development, it would be interesting to evaluate the change in the number of Greek companies listed and the volume of transactions by Greek nationals on the other European equity markets since Greece's accession to the EU.