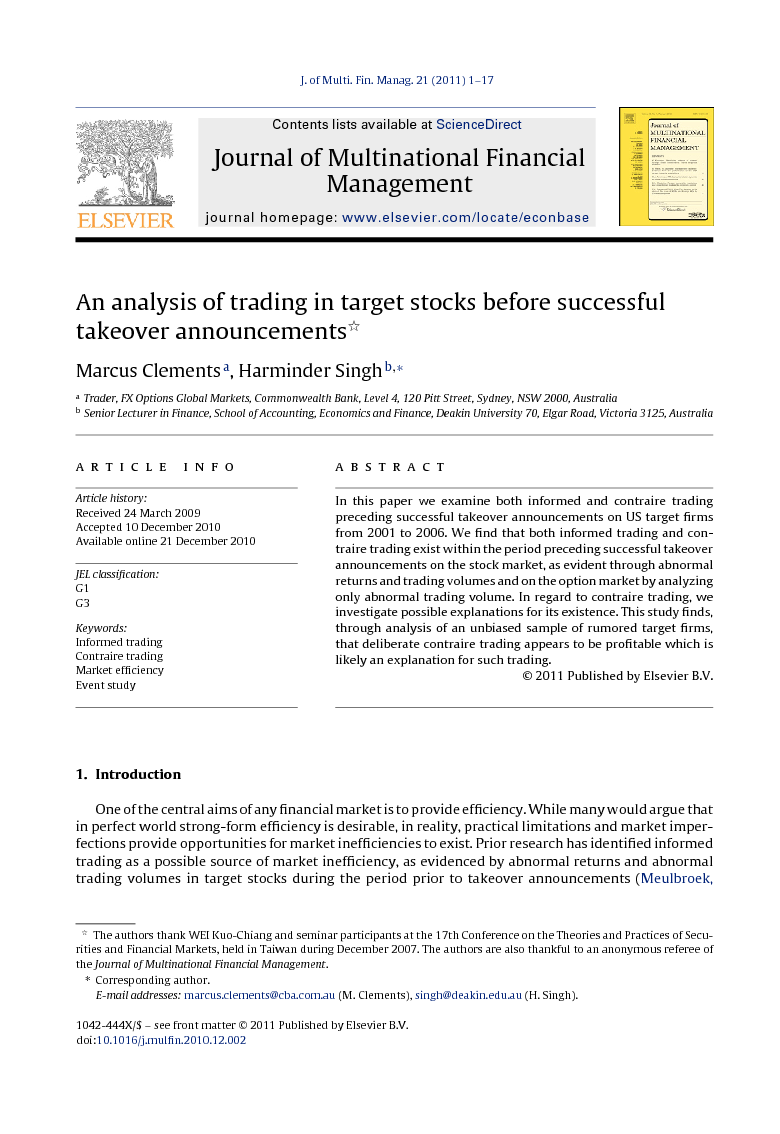 In this paper we examine both informed and contraire trading preceding successful takeover announcements on US target firms from 2001 to 2006. We find that both informed trading and contraire trading exist within the period preceding successful takeover announcements on the stock market, as evident through abnormal returns and trading volumes and on the option market by analyzing only abnormal trading volume. In regard to contraire trading, we investigate possible explanations for its existence. This study finds, through analysis of an unbiased sample of rumored target firms, that deliberate contraire trading appears to be profitable which is likely an explanation for such trading.

One of the central aims of any financial market is to provide efficiency. While many would argue that in perfect world strong-form efficiency is desirable, in reality, practical limitations and market imperfections provide opportunities for market inefficiencies to exist. Prior research has identified informed trading as a possible source of market inefficiency, as evidenced by abnormal returns and abnormal trading volumes in target stocks during the period prior to takeover announcements (Meulbroek, 1992). The present study contends that investors may suffer behavioral biases and often over-react to inside information and rumors of takeovers. Thus, in addition to observing evidence of informed trading in the pre-announcement period, it is suggested that there may concurrently be a sizeable amount of ‘contraire’1 trading aimed at exploiting the over-reaction to takeover rumors, thereby earning abnormal returns. If found, such elements of trading would extend the perception of market inefficiency in the pre-announcement period to not only the commonly cited informed trading, but also to the existence of additional investors taking contraire trading positions against overly reactive informed traders. The principal purpose of this study is to analyze market efficiency through observing trading patterns in successful takeover targets. This will be achieved in two ways – first, by examining target stocks through abnormal returns and trading volumes, and then examining options through trading volumes, for evidence that possible informed and ‘contraire’ trading in the period prior to successful takeover announcements may be occurring. Second, the profitability (and, hence, the viability) of contraire trading in the context of takeover rumors through an example trading strategy will be examined. This study also investigates the effects firm size and option availability have on market efficiency in the pre-announcement period. As takeover premiums are generally significantly positive (Dodd, 1980, Asquith, 1983, Jensen and Ruback, 1983 and Singh and Agarwal, 2006), there is substantial incentive for investors to identify takeover targets and take long positions before a takeover announcement in order to benefit from the premium, which leads to heightened trading activity. Gao and Oler (2004) indicate that a substantial time–lag exists between abnormal volume and abnormal stock price movement. They argue that this disparity occurs for a period of time because an increase in informed/speculative buying is offset by high net worth, or institutional investors engaging in the profitable arbitrage of shorting against target takeover rumors.2 Such a phenomenon has important ramifications by adding to the body of knowledge on the extent of market inefficiency, and also has practical implications in terms of exploitative trading strategies. Thus, this hypothesis – as described on the stock market by Gao and Oler (2004) – is re-examined, in addition to identifying the existence of the same phenomenon on the options market. We find that a significant trading volume takes place preceding significant abnormal returns. We further report that taking a short position on the day of a rumor of takeover being published in The Wall Street Journal produced significant returns. This study adopts standard event study methodology, and is largely based on the foundations set by Brown and Warner (1985). The remainder of the paper is structured as follows. Section 2 continues by reviewing the relevant theoretical frameworks and compares and analyzes how prior empirical results fit within these frameworks. Section 3 describes the data collection, filtration and methodology adopted. Section 4 presents the empirical findings of this study, and Section 5 provides a more in-depth discussion of how the findings compare and contrast to prior research. Finally, Section 6 contains the conclusions.

This study uses event study methodology to examine the impact of takeover announcements on the trading patterns of target firms. The findings of positive CAR and positive abnormal trading volumes prior to successful takeover announcements are consistent with most of the research in the field, for example, Mandelker (1974), Keown and Pinkerton (1981), Asquith (1983), Dennis and McConnell (1986), Franks and Harris (1989), and Gao and Oler (2004). Furthermore, abnormal trading activity is also found to be evident on the option market, through abnormal trading volumes in both call and put options. The combination of such findings highlights that information asymmetry is likely to be occurring in the pre-announcement period, in conjunction with probable informed trading. In addition, a lag effect is found in the pre-announcement period whereby significant abnormal trading volume precedes significant abnormal returns. This lag effect indicates that, for a period of time, increased selling offsets buying. To explore this lag, the suggested liquidity clustering hypothesis for the selling (or contraire trading) was examined. Such a hypothesis is found to be unlikely given significantly positive abnormal bid/ask spreads during the pre-announcement period, and the positive relationship established between abnormal volume and abnormal spreads. Alternatively, the profitability of sell side transactions on an unbiased sample of takeover rumors was examined as a justification for deliberate selling of informed traders’ ‘over-reaction’. This investigation finds that taking a short position on the day of publication of the rumored takeover in The Wall Street Journal, produces significant returns as, more often than not; the takeover does not eventuate within a 70-day period. Given this finding, deliberate arbitrage-type trading is a plausible explanation for at least some of the sell side activity. Finally, sensitivity analysis was undertaken in regard to the issues of option availability. We find that those target firms that have options available on their underlying stock show lower cumulative abnormal returns and trading volumes than those that do not. Interestingly, no such migration effect is evident in the contraire sell side activity, with the lag effect remaining constant regardless of option availability. Our findings in regard to the proposition of firm size are polarized. On the one hand, cumulative abnormal returns and abnormal trading volumes are much lower in larger target firms. This result suggests larger firms experience a lower degree of informed trading and, thus, greater efficiency. However, the lag effect is far greater in larger firms than in smaller firms. Such a contrasting finding in regard to target size and market efficiency cannot be reconciled here and is left for future research.