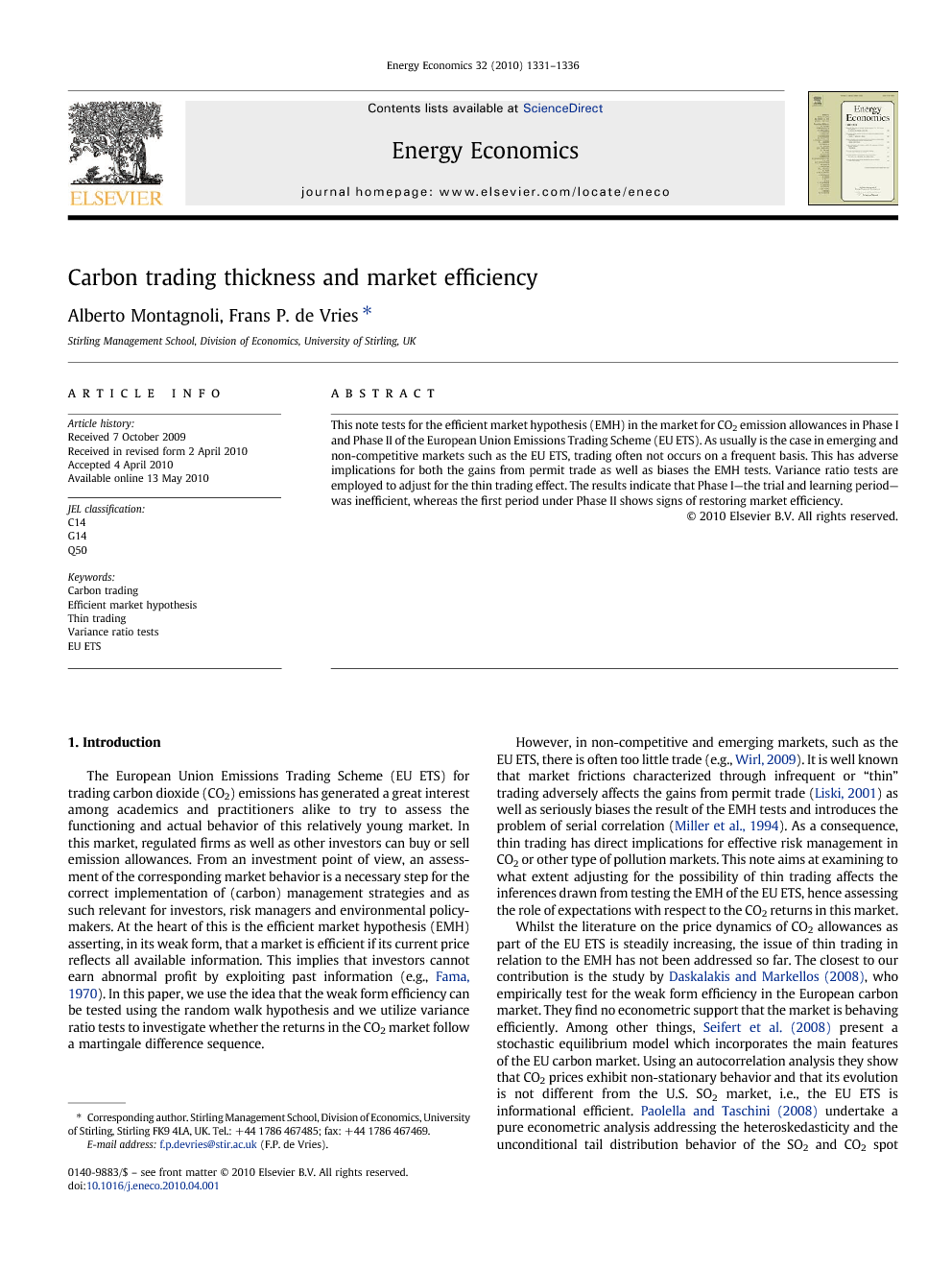 This note tests for the efficient market hypothesis (EMH) in the market for CO2 emission allowances in Phase I and Phase II of the European Union Emissions Trading Scheme (EU ETS). As usually is the case in emerging and non-competitive markets such as the EU ETS, trading often not occurs on a frequent basis. This has adverse implications for both the gains from permit trade as well as biases the EMH tests. Variance ratio tests are employed to adjust for the thin trading effect. The results indicate that Phase I—the trial and learning period—was inefficient, whereas the first period under Phase II shows signs of restoring market efficiency.

The European Union Emissions Trading Scheme (EU ETS) for trading carbon dioxide (CO2) emissions has generated a great interest among academics and practitioners alike to try to assess the functioning and actual behavior of this relatively young market. In this market, regulated firms as well as other investors can buy or sell emission allowances. From an investment point of view, an assessment of the corresponding market behavior is a necessary step for the correct implementation of (carbon) management strategies and as such relevant for investors, risk managers and environmental policymakers. At the heart of this is the efficient market hypothesis (EMH) asserting, in its weak form, that a market is efficient if its current price reflects all available information. This implies that investors cannot earn abnormal profit by exploiting past information (e.g., Fama, 1970). In this paper, we use the idea that the weak form efficiency can be tested using the random walk hypothesis and we utilize variance ratio tests to investigate whether the returns in the CO2 market follow a martingale difference sequence. However, in non-competitive and emerging markets, such as the EU ETS, there is often too little trade (e.g., Wirl, 2009). It is well known that market frictions characterized through infrequent or “thin” trading adversely affects the gains from permit trade (Liski, 2001) as well as seriously biases the result of the EMH tests and introduces the problem of serial correlation (Miller et al., 1994). As a consequence, thin trading has direct implications for effective risk management in CO2 or other type of pollution markets. This note aims at examining to what extent adjusting for the possibility of thin trading affects the inferences drawn from testing the EMH of the EU ETS, hence assessing the role of expectations with respect to the CO2 returns in this market. Whilst the literature on the price dynamics of CO2 allowances as part of the EU ETS is steadily increasing, the issue of thin trading in relation to the EMH has not been addressed so far. The closest to our contribution is the study by Daskalakis and Markellos (2008), who empirically test for the weak form efficiency in the European carbon market. They find no econometric support that the market is behaving efficiently. Among other things, Seifert et al. (2008) present a stochastic equilibrium model which incorporates the main features of the EU carbon market. Using an autocorrelation analysis they show that CO2 prices exhibit non-stationary behavior and that its evolution is not different from the U.S. SO2 market, i.e., the EU ETS is informational efficient. Paolella and Taschini (2008) undertake a pure econometric analysis addressing the heteroskedasticity and the unconditional tail distribution behavior of the SO2 and CO2 spot market returns. They propose the use of a mixed-normal GARCH model to describe and forecast the returns on the CO2 allowances. Benz and Trück (2009) look at the CO2 spot price dynamics and at the volatility of the returns and advocate the implementation of Markov switching and AR-GARCH models. Finally, Daskalakis et al. (2009) show that the EU ETS spot prices exhibit jumps and non-stationary behavior. Our contribution extends the discussion and aforementioned literature by evaluating the EMH for the EU ETS with the explicit adjustment for the possibility of thin trading. We particularly use a series of variance ratio (VR) tests. These tests have been widely used in finance research, but have, to the best of our knowledge, not been applied to analyze the functioning of tradable permit markets or other “commodity” markets.1 The VR tests resemble the class of non-parametric tests which have the advantage of preserving flexibility in the functional specifications, in particular in the context of tradable permits (or quota) (e.g., Oude Lansink and van der Vlist, 2008, p.488). The paper proceeds with a description of the empirical framework. Section 3 discusses the data and provides some basic statistics. Results are presented in Section 4, followed by conclusions in Section 5.

This paper tests the efficiency of the EU ETS carbon market. Although market efficiency is generally important, it is particularly relevant when the market is relatively immature and in an emerging state. Assessing the behavior of market participants in the EU ETS, as reflected through the behavior of CO2 spot price dynamics, is especially relevant for effective risk management and (carbon) investment strategies. However, in the relatively young European carbon market the number of trades was very limited for the period in our sample. It is this infrequent or thin trading that has negative implications for both the gains from permit trade as well as the statistical inferences for testing the EMH. For the sample periods 27 June 2005 to 28 December 2007 (Phase I) and 26 February 2008 to 4 April 2009 (Phase II) the EMH is tested through variance-ratio tests while adjusting for thin trading. The results show that the EU ETS was inefficient during Phase I but efficient during the first period of Phase II. This suggests that the carbon market shows the first signs of maturation after the learning and trial period in Phase I.