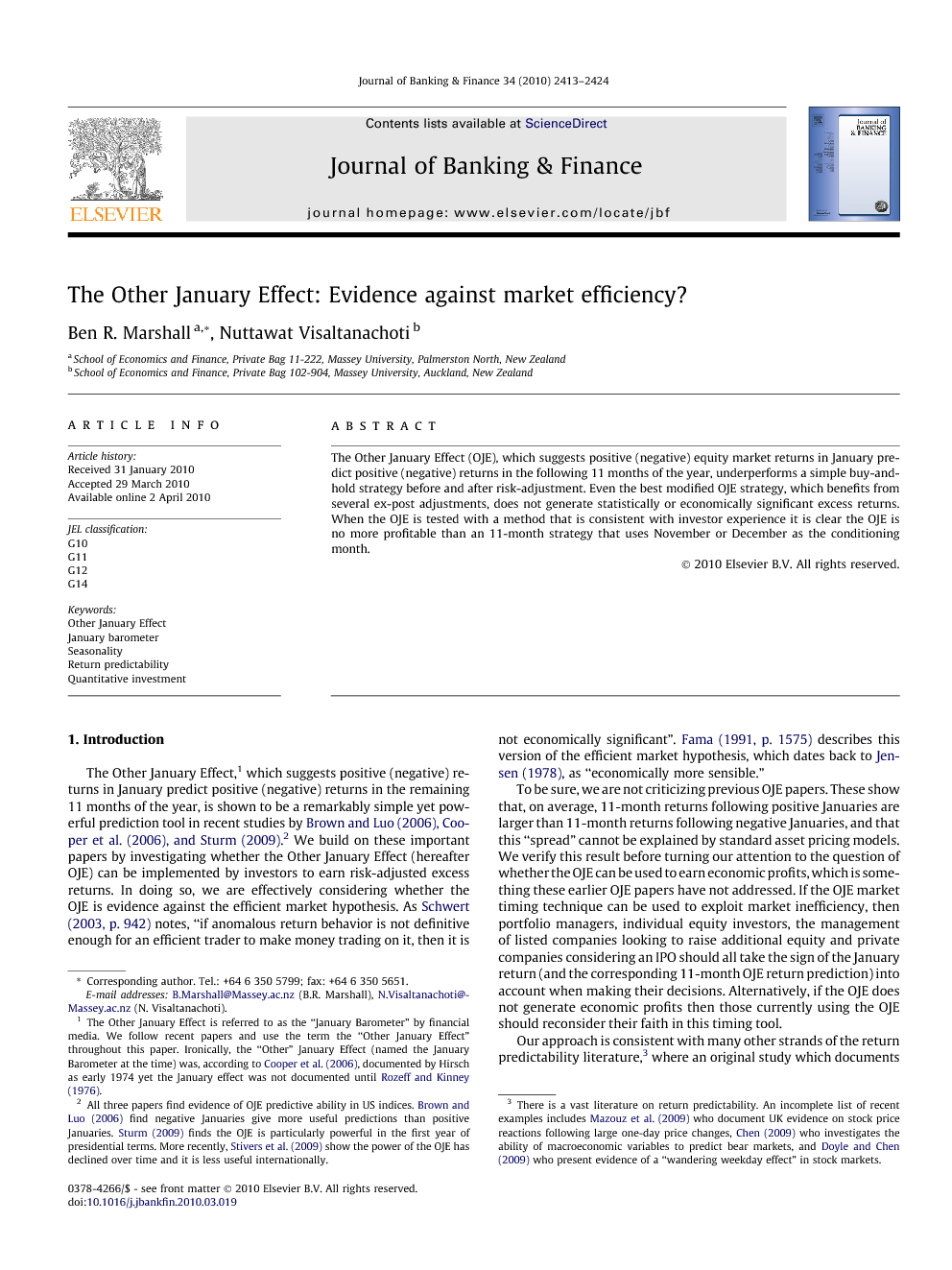 The Other January Effect (OJE), which suggests positive (negative) equity market returns in January predict positive (negative) returns in the following 11 months of the year, underperforms a simple buy-and-hold strategy before and after risk-adjustment. Even the best modified OJE strategy, which benefits from several ex-post adjustments, does not generate statistically or economically significant excess returns. When the OJE is tested with a method that is consistent with investor experience it is clear the OJE is no more profitable than an 11-month strategy that uses November or December as the conditioning month.

The Other January Effect (OJE) suggests positive (negative) returns in January are said to predict positive (negative) February–December returns. We consider if the OJE market timing technique can be implemented to earn risk-adjusted excess returns. This issue should be of interest to portfolio managers, individual equity investors, and the management of listed companies looking to raise additional equity and private companies considering an IPO. If the OJE market timing technique can be used to profit from market inefficiency, then they should all pay attention to the sign of the January return before making their decision. On the other hand, if the OJE does not generate economic profits then proponents of the OJE should reconsider their faith in this indicator. We show the OJE cannot be implemented to earn statistically and economically significant risk-adjusted excess returns. The OJE is therefore not evidence against market efficiency. Consistent with earlier work, we find 11-month returns are, on average, larger following positive Januaries than negative Januaries (i.e. the simple spread is positive), but there are four factors behind these translating into superior profits for an investor adopting the OJE. Firstly, the simple spread between the average 11-month returns following positive and negative Januaries does not represent the 11-month returns earned by an OJE investor. We demonstrate the weighted spread (which is consistent with investor experience) between 11-month returns following positive and negative Januaries is smaller than the simple spread. Secondly, the OJE requires the January return to be observed prior to a signal being generated to go long or short the market. January returns tend to be larger than the monthly returns of other months in the US so remaining out of the market in January incurs a relatively large opportunity cost. Thirdly, 11-month returns following negative Januaries are positive on average. The OJE is short the market during these periods so losses are incurred. This results in it underperforming a simple strategy that is long the equity market every February to December. Fourthly, a data-mined OJE strategy of always remaining long the market in January, taking a 11-month long position following positive Januaries, and investing in T-bills (or a combination of T-bills and the equity market) following negative Januaries still does not significantly (either statistically or economically) out-perform a 12-month passive buy-and-hold strategy. This is due to 11-month T-bill returns only being marginally larger than 11-month equity returns on average following negative Januaries. Our results are robust. The OJE cannot be implemented to earn risk-adjusted excess returns in portfolios of stocks of different sizes or international indices. Moreover, we show that when the OJE is tested with techniques that are consistent with investor experience it is not a superior 11-month return predictor to strategies based on November or December as the conditioning month. In summary, we suggest practitioners should think twice before using the OJE as a market timing tool. There is no evidence that it provides useful information. The academic community should also be aware that the OJE is not able to earn excess returns and is therefore not evidence against the commonly expressed version of efficient market hypothesis which recognizes the importance of economic significance.