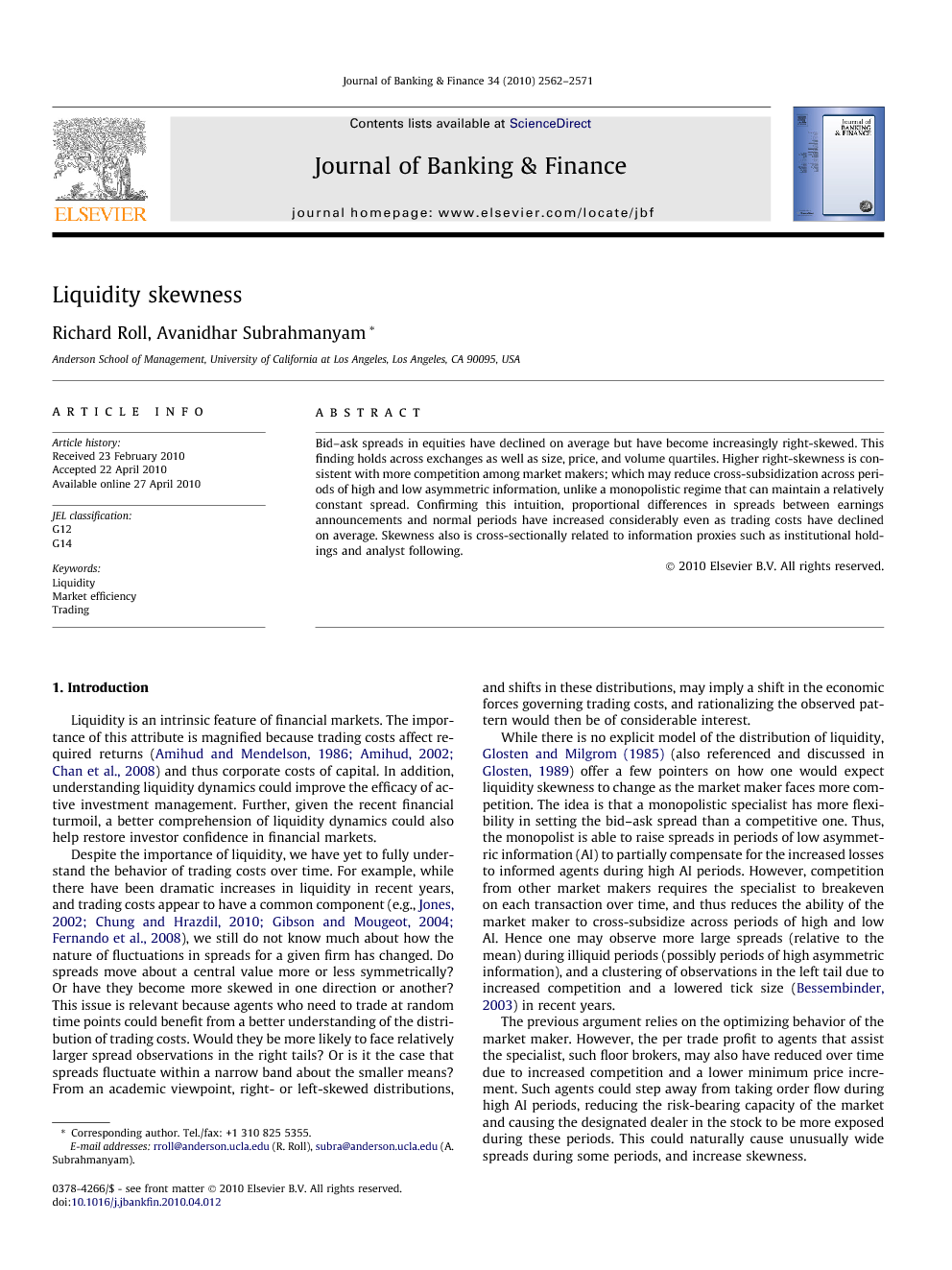 Bid–ask spreads in equities have declined on average but have become increasingly right-skewed. This finding holds across exchanges as well as size, price, and volume quartiles. Higher right-skewness is consistent with more competition among market makers; which may reduce cross-subsidization across periods of high and low asymmetric information, unlike a monopolistic regime that can maintain a relatively constant spread. Confirming this intuition, proportional differences in spreads between earnings announcements and normal periods have increased considerably even as trading costs have declined on average. Skewness also is cross-sectionally related to information proxies such as institutional holdings and analyst following.

Liquidity is an intrinsic feature of financial markets. The importance of this attribute is magnified because trading costs affect required returns (Amihud and Mendelson, 1986, Amihud, 2002 and Chan et al., 2008) and thus corporate costs of capital. In addition, understanding liquidity dynamics could improve the efficacy of active investment management. Further, given the recent financial turmoil, a better comprehension of liquidity dynamics could also help restore investor confidence in financial markets. Despite the importance of liquidity, we have yet to fully understand the behavior of trading costs over time. For example, while there have been dramatic increases in liquidity in recent years, and trading costs appear to have a common component (e.g., Jones, 2002, Chung and Hrazdil, in press, Gibson and Mougeot, 2004 and Fernando et al., 2008), we still do not know much about how the nature of fluctuations in spreads for a given firm has changed. Do spreads move about a central value more or less symmetrically? Or have they become more skewed in one direction or another? This issue is relevant because agents who need to trade at random time points could benefit from a better understanding of the distribution of trading costs. Would they be more likely to face relatively larger spread observations in the right tails? Or is it the case that spreads fluctuate within a narrow band about the smaller means? From an academic viewpoint, right- or left-skewed distributions, and shifts in these distributions, may imply a shift in the economic forces governing trading costs, and rationalizing the observed pattern would then be of considerable interest. While there is no explicit model of the distribution of liquidity, Glosten and Milgrom (1985) (also referenced and discussed in Glosten, 1989) offer a few pointers on how one would expect liquidity skewness to change as the market maker faces more competition. The idea is that a monopolistic specialist has more flexibility in setting the bid–ask spread than a competitive one. Thus, the monopolist is able to raise spreads in periods of low asymmetric information (AI) to partially compensate for the increased losses to informed agents during high AI periods. However, competition from other market makers requires the specialist to breakeven on each transaction over time, and thus reduces the ability of the market maker to cross-subsidize across periods of high and low AI. Hence one may observe more large spreads (relative to the mean) during illiquid periods (possibly periods of high asymmetric information), and a clustering of observations in the left tail due to increased competition and a lowered tick size (Bessembinder, 2003) in recent years. The previous argument relies on the optimizing behavior of the market maker. However, the per trade profit to agents that assist the specialist, such floor brokers, may also have reduced over time due to increased competition and a lower minimum price increment. Such agents could step away from taking order flow during high AI periods, reducing the risk-bearing capacity of the market and causing the designated dealer in the stock to be more exposed during these periods. This could naturally cause unusually wide spreads during some periods, and increase skewness. Our analysis confirms these conjectures. We find that average annual skewness in bid–ask spreads has indisputably increased in recent years. For the full sample, even as average spreads at the end of the sample falls to a tenth to what they were at the beginning of the sample, skewness increases seven-fold. The increase is apparent in NYSE/Amex as well as Nasdaq stocks, and across size-, price-, and volume-based quartiles. We confirm the skewness increase both for CRSP-based closing bid–ask quotes as well as TAQ data filtered for outliers. We shed empirical light on specific mechanisms by which skewness may have increased in recent years. Our arguments suggest that as the market maker loses monopoly power, spreads in periods of high asymmetric information widen relative to those in normal periods even as the mean spread declines. We show that the spread prior to earnings announcements has indisputably increased in recent years relative to the spread during other periods, supporting this reasoning. We show that increases in skewness are correlated with increases in spreads around earnings announcements as well as on extreme negative return days (when illiquidity is generally lower, viz. Chordia et al., 2001). We find that skewness is cross-sectionally related to information proxies such as return volatility and institutional holdings. We find that skewness is inversely related to analyst following, which is consistent with the notion that analysts imply greater production of public information and thus less information asymmetry (Easley et al., 1998). To our knowledge, this is the first paper to consider skewness in trading costs; as such, it is largely descriptive in nature. We leave a detailed analysis of what types of events result in extreme illiquidity that, in turn, affect skewness, for future research. However, we believe the third moment of liquidity, while hitherto unexplored, may capture important features of securities markets, especially during episodes that potentially affect liquidity, such as the recent financial crisis. Further analysis of macroeconomic conditions that influence liquidity skewness would also be a worthwhile area of research. It is important to clarify that we are not asserting anything about investor welfare. Thus, the average spread has declined considerably even though the skewness in bid–ask spreads has increased substantially. The sign of the shift in overall investor welfare remains an open question and we believe that future theoretical work would shed further light on the subject. The paper is organized as follows: Section 2 provides a simple example to show how skewness in spreads can increase with a reduction in the minimum tick size and increased competition. Section 3 describes the data and documents our main descriptive results about liquidity skewness. Section 4 discusses a potential explanation for the increased skewness. Section 5 discusses cross-sectional determinants of liquidity skewness. Section 6 concludes.

Stock bid–ask spreads are increasingly right-skewed in recent years. This finding holds across exchanges, and across firms stratified by size, trading volume, and price. The result could indicate that as specialists and dealers increasing competition over time, they are less able to cross-subsidize spreads between periods of high and low asymmetric information. This may lead to larger spreads during periods where private information is more material, and, in turn, increasing right-skewness under a competitive market making regime. Consistent with this observation, the percentage difference between spreads prior to earnings announcements and other periods experiences a considerable increase in recent years. Liquidity skewness is cross-sectionally related to information proxies such as institutional holdings and analyst following, which are associated with the proportion of traders with privileged information. Further research is required to pin down the causes of liquidity skewness. While we find that spreads during periods of high asymmetric information are larger relative to their mean in recent years, it remains to be known whether this is associated with high funding constraints for market maker inventories (Brunnermeier and Pedersen, 2009). Market makers constrained by competition may not be able to provide adequate liquidity during periods with high financing costs since they cannot recoup their losses in those periods by charging higher spreads during normal periods. This issue is worth exploring. It also is worth investigating whether co-skewness of individual stock spreads with aggregate spread is material for the cross-section of stock returns. In closing, we reiterate that we document a decline in the average spread in recent times, indicating a lower mean cost of trading, in conjunction with an increase in spread skewness. The net effect of these phenomena on investors with varying preferences or utility functions appears to be a fertile and important arena for future work on liquidity.