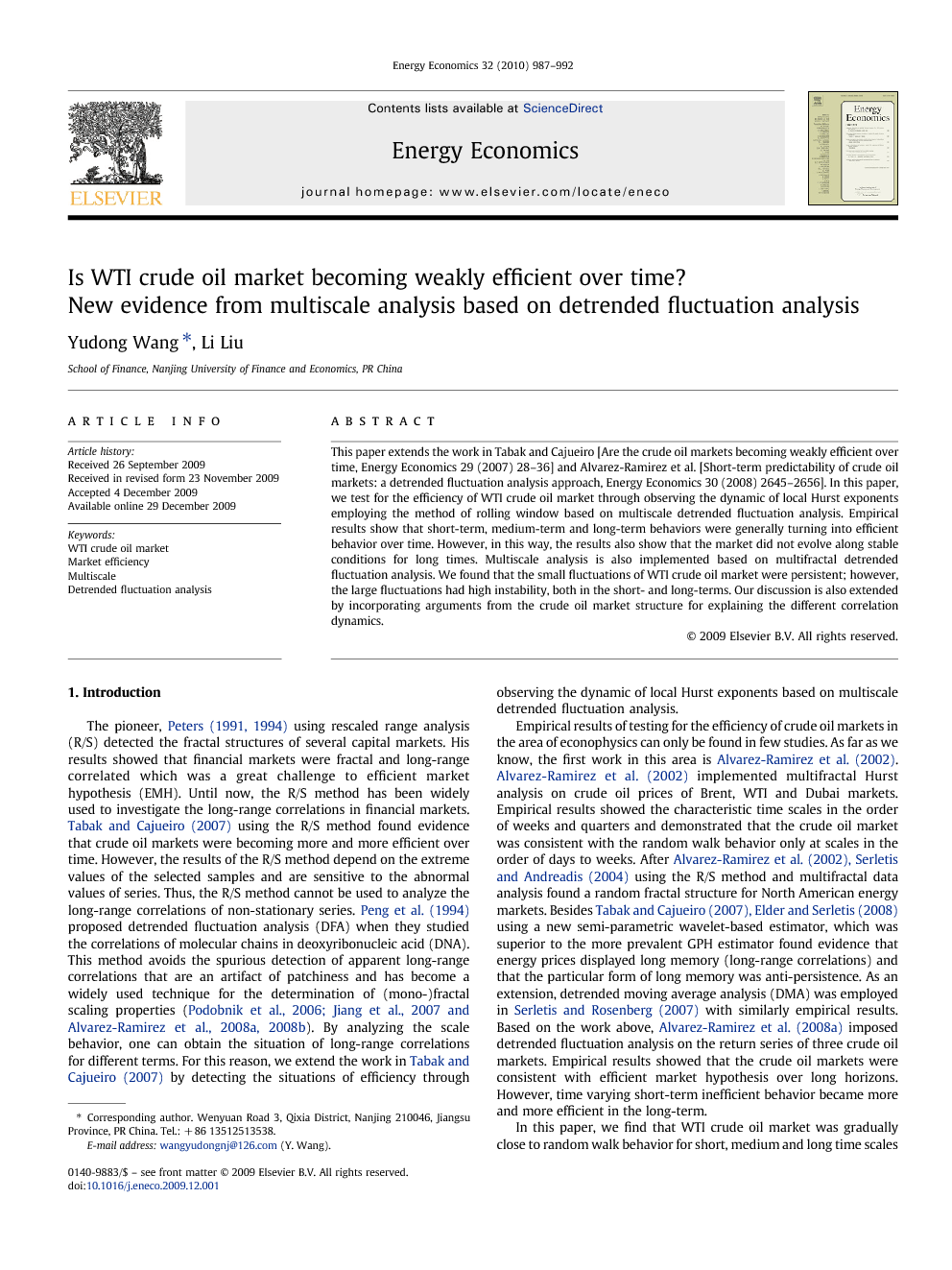 The pioneer, Peters, 1991 and Peters, 1994 using rescaled range analysis (R/S) detected the fractal structures of several capital markets. His results showed that financial markets were fractal and long-range correlated which was a great challenge to efficient market hypothesis (EMH). Until now, the R/S method has been widely used to investigate the long-range correlations in financial markets. Tabak and Cajueiro (2007) using the R/S method found evidence that crude oil markets were becoming more and more efficient over time. However, the results of the R/S method depend on the extreme values of the selected samples and are sensitive to the abnormal values of series. Thus, the R/S method cannot be used to analyze the long-range correlations of non-stationary series. Peng et al. (1994) proposed detrended fluctuation analysis (DFA) when they studied the correlations of molecular chains in deoxyribonucleic acid (DNA). This method avoids the spurious detection of apparent long-range correlations that are an artifact of patchiness and has become a widely used technique for the determination of (mono-)fractal scaling properties (Podobnik et al., 2006, Jiang et al., 2007, Alvarez-Ramirez et al., 2008a and Alvarez-Ramirez et al., 2008b). By analyzing the scale behavior, one can obtain the situation of long-range correlations for different terms. For this reason, we extend the work in Tabak and Cajueiro (2007) by detecting the situations of efficiency through observing the dynamic of local Hurst exponents based on multiscale detrended fluctuation analysis. Empirical results of testing for the efficiency of crude oil markets in the area of econophysics can only be found in few studies. As far as we know, the first work in this area is Alvarez-Ramirez et al. (2002). Alvarez-Ramirez et al. (2002) implemented multifractal Hurst analysis on crude oil prices of Brent, WTI and Dubai markets. Empirical results showed the characteristic time scales in the order of weeks and quarters and demonstrated that the crude oil market was consistent with the random walk behavior only at scales in the order of days to weeks. After Alvarez-Ramirez et al., 2002 and Serletis and Andreadis, 2004 using the R/S method and multifractal data analysis found a random fractal structure for North American energy markets. Besides Tabak and Cajueiro, 2007 and Elder and Serletis, 2008 using a new semi-parametric wavelet-based estimator, which was superior to the more prevalent GPH estimator found evidence that energy prices displayed long memory (long-range correlations) and that the particular form of long memory was anti-persistence. As an extension, detrended moving average analysis (DMA) was employed in Serletis and Rosenberg (2007) with similarly empirical results. Based on the work above, Alvarez-Ramirez et al. (2008a) imposed detrended fluctuation analysis on the return series of three crude oil markets. Empirical results showed that the crude oil markets were consistent with efficient market hypothesis over long horizons. However, time varying short-term inefficient behavior became more and more efficient in the long-term. In this paper, we find that WTI crude oil market was gradually close to random walk behavior for short, medium and long time scales using time varying multiscale analysis, although there were two apparent “jumps” in the short-term correlation dynamics which were caused by supply shocks. That is also to say, short-term, medium-term and long-term behaviors were generally becoming more and more efficient over time. Our discussion is also extended using multifractal detrended fluctuation analysis proposed by Kantelhardt et al. (2002). By incorporating arguments from the crude oil market structure, we try to find the explanations of the different correlation dynamics. This paper is organized as follows: we provide methodology and data description in 2 and 3, respectively. Section 4 is empirical results and Section 5 is the discussion. Conclusion is shown at the last section.

In this paper, we combine the multiscale analysis with the method of rolling windows to analyze the efficiency of WTI crude oil market employing detrended fluctuation analysis as an extension of the work in Tabak and Cajueiro, 2007 and Alvarez-Ramirez et al., 2008a. We focus on the analysis of the efficiency in the different terms. Evidence shows that WTI crude oil market short-, medium- and long-term behaviors were generally turning into efficient behavior. However, the change of long-term correlations were more fierce than short-term correlations indicating that the market did not evolve along stable conditions for long times. Evidence also shows that some shocks can be attributed to the jump for short-term behavior. We also impose multiscale analysis and the method of MF-DFA on WTI return series. From the results, we can see that the small fluctuations of WTI crude oil market could be forecasted; however, the large fluctuations had high instability, both in the short- and long-term. Our discussion is also extended by incorporating arguments from the crude oil market structure for explaining the different correlation dynamics. We conclude that short-term dynamics are mainly driven by the exogenous factors while demand and supply mechanism plays a main role in the long-term.